Structural reforms aimed at developing a more flexible labour market are often attributed all the virtues of fighting against mass unemployment and limiting the segmentation of the labour market between “insiders” on stable contracts  and “outsiders” who are unemployed or on precarious contracts. When the economy is growing, these measures can facilitate job creation for the benefit of the outsiders, but the results are likely to be more uncertain in a context of mass unemployment and sluggish growth. Structural reforms can indeed reduce the labour market duality arising from regulatory measures but they cannot combat the duality of the labour market inherent in human capital, which is exacerbated during periods of mass unemployment: given the same qualifications it is experience that makes the difference, and given equal experience it is qualifications that make the difference. High unemployment therefore strengthens the phenomenon of “queuing” to access more stable jobs. Structural reforms aimed at streamlining the labour market will thus primarily affect employees who have less qualifications and experience without however enabling outsiders to gain access to more stable employment. This means that inequality between workers is likely to rise, with no positive impact on employment due to the sluggishness of the economy. Only macroeconomic management that takes on board the goal of returning to full employment could lead to successful structural reform.

As we show in a special study, “La dévaluation par les salaires dans la zone euro: un ajustement perdant-perdant” [Devaluation through wages in the euro zone: a lose-lose adjustment] (Revue de l’OFCE, no. 136, November 2014), labour market segmentation has increased during the crisis despite the implementation of structural reforms in the euro zone countries. Since 2008, the employment rate [1] of seniors and of the better qualified has fared better than for other population groups in the four largest countries in the euro zone (Figures 1 and 2). 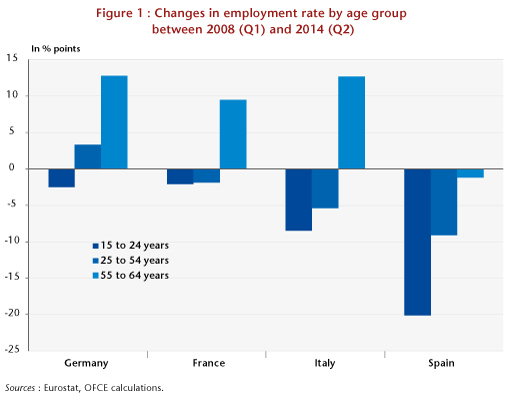 The adjustments in employment rates were also more striking for people without a high school diploma, with the exception of Italy, where the diploma does not seem to provide protection from unemployment or inactivity. In France, the adjustment in the employment rate clearly decreased with the type of degree. In Germany, the employment rate for those with less education has declined during the crisis while it has increased for the other categories. In Spain, the employment rate of university graduates has withstood the crisis better than the rate of other population groups. In addition to these developments in employment rates by educational category, wage income in Italy, Spain and France has fallen for the initial income deciles. This adjustment in the wage incomes of the lower deciles is probably due to a reduction in total working hours over the year (part-time work, shorter temporary contracts or longer periods of unemployment between contracts, reducing average compensation over the year). Thus, in the countries hit hardest by the crisis, the most vulnerable populations, with the least human capital, have found themselves more exposed to a deteriorating labour market, whether this has been felt through falling employment rates or a reduction in annual wage earnings. 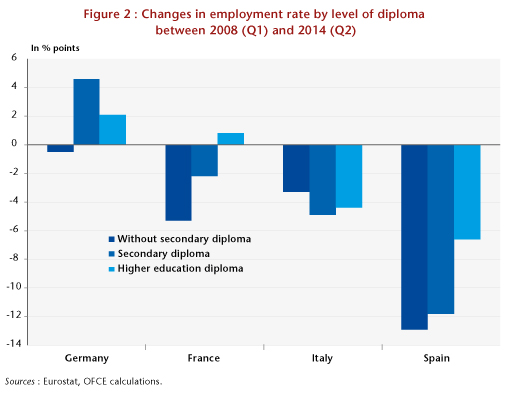 In the context of a deteriorating labour market, by accepting a slight downgrade the most qualified unemployed workers would be the first to find jobs, chasing out those who might otherwise have gotten it, who would themselves do the same thing at a lower level. This could explain why, at the end of the queue, it is the least skilled who are, regardless of labour legislation, the victims of unemployment and precarious employment.

The existence of a “spontaneous” segmentation in the labour market and the phenomenon of “queuing” may thus limit the success of a strategy of structural reforms and wage devaluation. In such a case, a more flexible labour market combined with a reduction in social welfare could increase inequalities between groups in the workforce without increasing the creation of full-time equivalent jobs.

[1] This is the ratio of the employed to the working-age population.