The French economy on the road to recovery

The publication of the INSEE’s business surveys on October 22 confirms the French economy’s positive situation in the second half of 2015, suggesting that the negative performance in the second quarter of 2015 (0%) will turn out to have been merely “an air pocket” after the strong growth seen in the first quarter (+0.7%). The business climate in industry has exceeded its long-term average for the seventh month in a row, and the service sector has been recovering rapidly since May 2015 and has climbed back to its average, the highest level in four years (Figure 1). The business climate in the construction sector nevertheless is still suffering from the crisis that hit it, but its downward trend halted at the end of 2014; despite monthly hiccups, the sector has begun a slow recovery that could signal the end of its woes in the coming quarters. 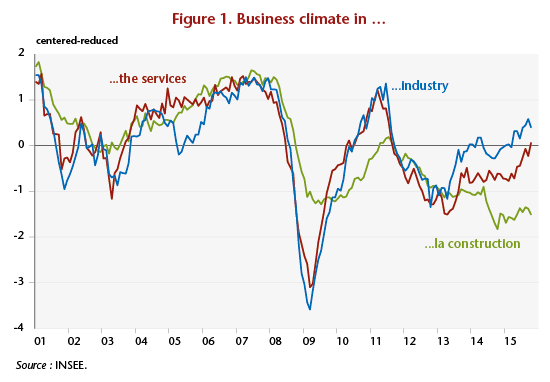 The confidence indicators, which provide qualitative information summarizing the balance of opinion on the various questions posed about business activity, consumer confidence and the situation in commerce, can be converted into quantitative information by means of an econometric equation linking these to the quarterly GDP growth rate[1]. Doing this makes it possible to use these purely qualitative data to estimate the GDP growth rate in the past and near future (two quarters), given that the publication of the surveys precede that for GDP. Among the sectoral indicators available, only the business climate in industry, services and construction provide econometrically useful information to trace the trajectory of the GDP growth rate. The other series are not significant, in particular the indexes for consumer confidence and for confidence in the retail and wholesale trade.

The leading index, which has a significantly more smoothed profile than GDP growth rates, cannot fully capture the volatility of activity and therefore should not strictly speaking be considered a predictor of growth (Figure 2). On the other hand, from a more qualitative viewpoint, it manages to delineate quite correctly the phases during which growth is above or below average (or the long-term) determined by the estimate. From this perspective, the indicator can be seen as marking a turning point in the economic cycle. Since the second quarter 2011, the indicator has not depicted any crossing of the long-term growth rate, despite the false signs of recovery raised by the quarterly GDP figures for Q2 2013 and Q1 2015.

Based on the survey data available up to October, the growth foreseen by the indicator is 0.4% in the third and fourth quarter of 2015, exactly equal to long-term growth[2]. While a signal of recovery is not yet clearly given by the indicator, it should be noted that the information on the fourth quarter, which is limited to the October surveys, is quite partial. The confidence climates, which are extrapolated to the end of the year, are based on conservative assumptions and are likely to be upgraded if the surveys continue to improve from now to December. 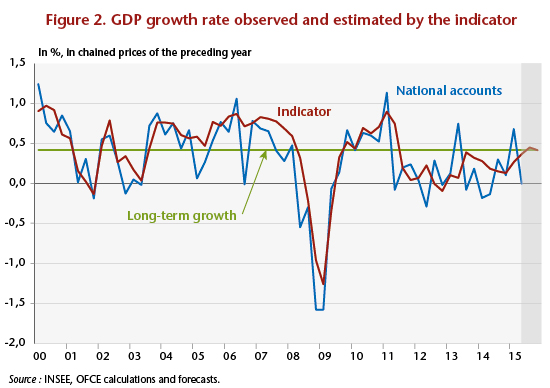 The quantitative information available at this time for the third quarter of 2015 also gives cause for optimism, after the disappointment of the second quarter. Under the impact of the disinflation brought on by lower energy prices, which enabled a sharp rebound in purchasing power, household consumption of goods recovered sharply at the beginning of the year (Figure 3). The rise was interrupted in the second quarter, due to poor sales in March, which pulled down the figures, but consumption has resumed its upward trajectory continually since then. The carry-over in August for the third quarter was clearly positive (+0.6%), which suggests that the consumption of goods will again contribute positively to GDP growth for the quarter.

The projection of a return to growth in the third quarter is also confirmed by trends in the industrial production index (IPI), which rose sharply in August (+1.6% for the total IPI, and +2.2% for the manufacturing index itself). This rebound followed a drop in production after the peak in February-March 2015[3], which contributed to the poor performance of GDP in the second quarter (Figure 3), and nourished the idea that the second quarter was not an “air pocket” but the continuation of a long phase of stagnation for a France that was unable to take advantage of the favourable winds blowing from outside[4]. The carry-over in industrial production in August now stands at 0.3%, while it was ‑0.7% in the old series available in July.

The recent trends in the monthly indicators augur a renewal of growth in the third quarter of 2015. The extrapolation of GDP growth using the leading indicator, supplemented by the already available quantitative data, also points to a 0.4% increase in activity in the third quarter, which, if it is realized, would then put the economy on a firm track to finally initiate a recovery.

[2] The long-term growth considered here is not the potential growth estimated by its structural determinants using a production function, but the average GDP growth rate as reflected in the estimate of the indicator.

[3] It should be noted that the statistical revisions can change the perception of the economy’s dynamics in the very short term. The IPI series published on 9 October 2015 by the INSEE has revised the level of the index significantly upwards compared to the previous publication. The IPI is still on a downward trend between February and July 2015, but the trajectory described is less negative, and the quarterly average of the index in the second quarter of 2015 is affected: according to the old series, it stood at -0.7%, compared with -0.4% according to the revised series.