According to figures from the French statistics institute (INSEE) published on 12 May 2017, non-agricultural commercial employment in France increased (+0.3%) in the first quarter of 2017 for the eighth consecutive quarter. Employment rose by 198,300 in one year. Despite the improvement on the jobs front experienced since 2015, the impact of the crisis is still lingering.

Unemployment rates are marked by the crisis and reforms 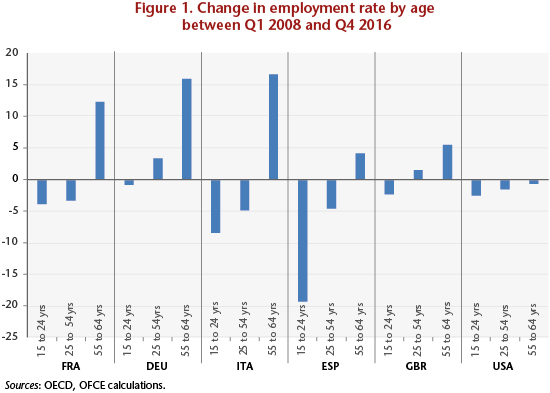 A sharp impact of the participation rate on unemployment, offset by a reduction in working time

During the course of the crisis, most European countries reduced the actual working hours to a greater or lesser extent by means of partial unemployment schemes, the reduction of overtime and the use of time-savings accounts, but also through the expansion of part-time work (particularly in Italy and Spain), including involuntary part-time work. On the other hand, the favourable trend in unemployment in the US (Table 1) is explained partly by a significant decline in the labour force participation rate of people aged 15 to 64 (Table 2). The rate in the last quarter of 2016 was 73.1%, i.e. 2.4 points less than at the beginning of 2007.

Note that this trend towards a reduction in working hours is an old one. Indeed, since the end of the 1990s, all the countries studied have experienced large reductions in working time. In Germany, this decline averaged 0.5% per year between 1998 and 2008. In France, the transition to the 35-hour work week resulted in a similar decrease (-0.6% per year) over that period. Overall, between 1998 and 2008, working hours were down 5% in Germany, 6% in France, 4% in Italy, 3% in the United Kingdom and the United States, and 2% in Spain. 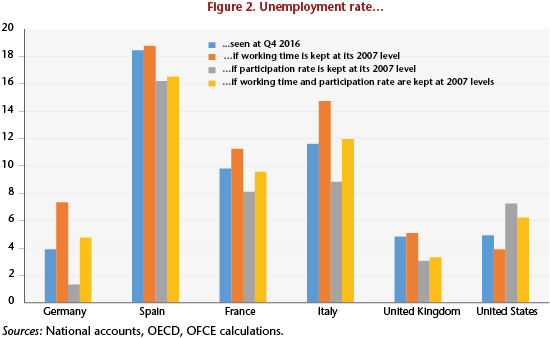 Beyond the “unemployment rate” 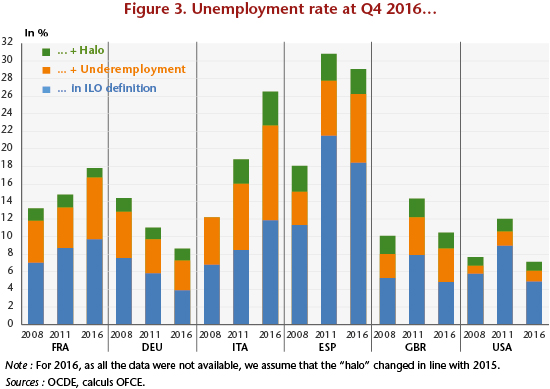