This text is based on the 2017-2019 outlook for the global economy and the euro zone, a full version of which is available here.

The euro zone has returned to growth since mid-2013, after having experienced two crises (the financial crisis and the sovereign debt crisis) that led to two recessions: in 2008-2009 and 2011-2013. According to Eurostat, growth accelerated during the third quarter of 2017 and reached 2.6% year-on-year (0.6% quarter-on-quarter), its highest level since the first quarter of 2011 (2.9%). Beyond the performance of the euro zone as a whole, the current situation is marked by the generalization of the recovery to all the euro zone countries, which was not the case in the previous phase of recovery in 2010-2011. Fears about the sustainability of the debt of the so-called peripheral countries were already being reflected in a sharp fall in GDP in Greece and the gradual slide into recession of Portugal, Spain and a little later Italy. END_OF_DOCUMENT_TOKEN_TO_BE_REPLACED

The just released L’économie européenne 2017 provides a broad overview of the issues being posed today by the European Union project. Brexit, migration, imbalances, inequality, economic rules that are at once rigid and flexible… the EU remains an enigma. Today it gives the impression of having lost the thread of its own history or to even to be going against History, such as the recent international financial crisis or in earlier times the Great Depression. END_OF_DOCUMENT_TOKEN_TO_BE_REPLACED

On Thursday, March 10, after the meeting of its Governing Council, the European Central Bank (ECB) announced a series of additional measures for the quantitative easing of monetary policy. The aim is to prevent the onset of deflation and to boost growth in the euro zone. The key innovation lies in the measure for bank financing at negative rates. While the measures were well received by the markets at the time of the announcement, a lapse in Mario Draghi’s communications during the press conference following the Board of Governors meeting greatly undercut some of the impact expected from the decisions taken. END_OF_DOCUMENT_TOKEN_TO_BE_REPLACED

Has the implementation of unconventional monetary policies since 2008 by the central banks created new bubbles that are now threatening financial stability and global growth? This is a question that comes up regularly (see here, here,  here or here). As Roger Farmer shows, it is clear that there is a strong correlation between the purchase of securities by the Federal Reserve – the US central bank – and the stock market index (S&P 500) in the United States (Figure 1). While the argument may sound convincing at first glance, the facts still need to be discussed and clarified. First, it is useful to remember that correlation is not causation. Secondly, an increase in asset prices is precisely a transmission channel for conventional monetary policy and quantitative easing (QE). Finally, an increase in asset prices cannot be treated as a bubble: developments related to fundamentals need to be distinguished from purely speculative changes.

If the ultimate goal of central banks is macroeconomic stability [1], the transmission of their decisions to the target variables (inflation and growth) takes place through various channels, some of which are explicitly based on changes in asset prices. Thus, the effects expected from QE are supposed to be transmitted in particular by so-called portfolio effects. By buying securities on the markets, the central bank encourages investors to reallocate their securities portfolio to other assets. The objective is to ease broader financing conditions for all economic agents, not just those whose securities are targeted by the QE programme. In doing this, the central bank’s actions push asset prices up. It is therefore not surprising to see a rise in equity prices in connection with QE in the US.

Every increase in asset prices is not a bubble

Furthermore, it is necessary to make sure that the correlation between asset purchases and their prices is not just a statistical artefact. The increase observed in prices may also reflect favourable fundamentals and be due to improved growth prospects in the United States. The standard model for determining the price of a financial asset identifies its price as equal to the present value of anticipated income flows (dividends). Although this model is based on numerous generally restrictive assumptions, it nevertheless identifies a first candidate, changes in dividends, to explain changes in stock prices in the United States since 2008.

Figure 1 shows a clear correlation between the series of dividends [2] paid and the S&P 500 index between April 2010 and October 2013. Part of the rise in equity prices can be explained simply by the increase in dividends: the usual determinant of stock market prices. Looking at this indicator, only the period starting at the beginning of 2014 could then indicate a disconnect between dividends and share prices, and thus possibly point to an over-adjustment. 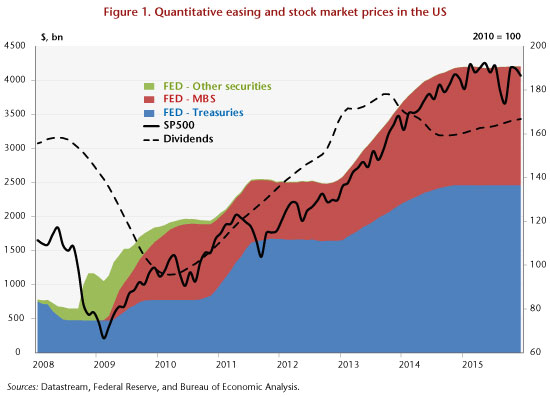 A correlation that isn’t found in the euro zone

If the theory that unconventional monetary policies create bubbles is true, then it should also be observed in the euro zone. Yet performing the same graph as the one for the United States does not reveal a link between the liquidity provided by the European Central Bank (ECB) and the Eurostoxx index (Figure 2). The first phase in the increase in the size of the ECB’s balance sheet, via its refinancing operations starting in September 2008, came at a time when stock markets were collapsing, following the bankruptcy of Lehman Brothers. Likewise, the very long-term refinancing operations carried out by the ECB at the end of 2011 do not seem to be correlated with the stock market index. The rise in share prices coincides in fact with Mario Draghi’s statement in July 2012 that put a halt to concerns about a possible breakup of the euro zone. It is of course possible to argue that the central bank has played a role, but any link between liquidity and asset prices is simply not there. At the end of 2012, the banks paid back their loans to the ECB, which reduced the cash in circulation. Finally, the recent period is once again illustrating the fragility of the argument that QE creates bubbles. It is precisely at a time when the ECB is undertaking a programme of large-scale purchases of securities, along the lines of the Federal Reserve, that we are seeing a fall in world stock indices, in particular the Eurostoxx. 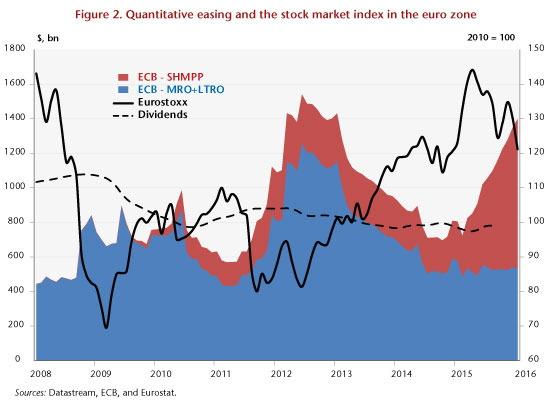 So does this mean that there is no QE-bubble link?

Not necessarily. But to answer this question, it is necessary first to identify precisely the portion of the increase that is due to fundamentals (dividends and companies’ share prospects). A bubble is usually defined as the difference between the observed price and a so-called fundamental value. In a forthcoming working paper, we endeavour to identify periods of over- or undervaluation of a number of asset prices for both the euro zone and the United States. Our approach involves estimating different models of asset prices and thereby to extract a component that is unexplained by fundamentals, which is then called a “bubble”. We then show that for the euro zone, the ECB’s monetary policy broadly speaking (conventional and unconventional) does not seem to have a significant effect on the “bubble” component (unexplained by fundamentals) of asset prices. The results are stronger for the United States, suggesting that QE might have a significant effect on the “bubble” component of some asset prices there.

This conclusion does not mean that the central banks and the regulators are impotent and ignorant in the face of this risk. Rather than trying to dissect every movement in asset prices, the central banks should focus their attention on financial vulnerabilities and on the ability of agents (financial and non-financial) to absorb sharp fluctuations in asset prices. The best prevention against financial crises thus consists of continuously monitoring the risks being taken by agents rather than trying to limit variations in asset prices.

[1] We prefer a broad definition of the end objective that takes into account the diversity of institutionalized formulations of the objectives of central banks. While the mandate of the ECB is primarily focused on price stability, the US Federal Reserve has a dual mandate.

[2] The series of dividends paid shows strong seasonality, so this has been smoothed by a moving average over 12 months.

Since 2009, the French budget deficit has been cut by 3.3 GDP points, from 7.2 percent of GDP in 2009 to 3.9 points in 2014, even though the economic situation has been weighing heavily on the public purse. This improvement was due to the implementation of a tighter budget policy. Between 2010 and 2013, most of the consolidation effort came from higher taxes, but since 2014 the effort has largely involved savings in public expenditure. In 2014, public expenditure excluding tax credits[1]  recorded its weakest growth since 1959, the year when INSEE began to publish the national accounts: in value, spending excluding tax credits increased by 0.9%, though only 0.3% in volume terms (deflated by the GDP deflator). END_OF_DOCUMENT_TOKEN_TO_BE_REPLACED

On 1 January 2015, Lithuania adopted the euro officially, becoming the 19th member of the euro zone. The adoption was in reality formal, as the euro was already (very) present in Lithuania. For example at the end of 2014, over 75% of loans to Lithuanian businesses and households were denominated in euros, as were 25% of bank deposits. END_OF_DOCUMENT_TOKEN_TO_BE_REPLACED

According to a Eurostat press release published on 14 November 2014, euro zone GDP grew by 0.2% in the third quarter of 2014, and inflation stabilized in October at the very low level of 0.4%. Although the prospects of a new recession have receded for now, the IMF evaluates the likelihood of a recession in the euro zone at between 35% and 40%. This dismal prospect reflects the absence of a recovery in the euro zone, which is preventing a rapid reduction in unemployment. What lessons can be drawn? END_OF_DOCUMENT_TOKEN_TO_BE_REPLACED

In the latest publication of France’s Treasury Department,  Lettre Trésor-Eco, no. 132, June 2014 (Ministère des Finances et des Comptes publics and Ministère de l’Économie du Redressement productif et du Numérique), Thomas Lellouch and Arthur Sode develop the operating methods and the merits of a common unemployment insurance for the euro zone. They specify the main steps of how it would be applied, which would ensure neutrality between the Member States. They argue for harmonized employment and labour market policies, leading in the long term to a single contribution rate in the euro zone: END_OF_DOCUMENT_TOKEN_TO_BE_REPLACED

In the 1980s, under the European Monetary System (EMS), France repeatedly carried out currency realignments – in 1981, 1982, 1983 and 1986 – that were tantamount to devaluations. For its part, Germany had – already! – adopted a rigorous strategy of competitive disinflation, which, it was said at the time, led to disciplining its companies, which could not rely on the temporary advantages gained by currency devaluations rendering its exports more competitive. They were compelled instead to make investments so as to build up their future non-price competitiveness. Which they did… END_OF_DOCUMENT_TOKEN_TO_BE_REPLACED

From May 22 to May 25 Europeans will vote to elect the 751 Members of the European Parliament. These elections will take place in a context of strong mistrust for European institutions. While the crisis of confidence is not specifically European, in the Old Continent it is coupled with the hardest crisis since the Great Depression, and with a political crisis that shows the incapacity of European institutions to reach decisions. The issues at stake in the next European elections, therefore, have multiple dimensions that require a multidisciplinary approach. The latest issue of the Debates and Policies Revue de l’OFCE series (published in French and in English), gathers European affairs specialists – economists, law scholars, political scientists – who starting from the debate within their own discipline, share their vision on the reforms that are needed to give new life to the European project. Our goal is to feed the public debate through short policy briefs containing specific policy recommendations. Our target are obviously the candidates to the European elections, but also unions, entrepreneurs, civil society at large and, above all, citizens interested by European issues. END_OF_DOCUMENT_TOKEN_TO_BE_REPLACED