The effects of the oil counter-shock: The best is yet to come!

By Eric Heyer and Paul Hubert

Will this rise in oil prices put a question mark over the gradual recovery that seems to have begun in France in 2016?

In a recent study, we attempted to answer three questions about the impact of oil prices on French growth: will a change in oil prices have an immediate effect, or is there a time lag between the change and the impact on GDP? Are the effects of rises and falls in oil prices asymmetrical? And do these effects depend on the business cycle? The main results of our study can be summarized as follows:

Let us now apply these results to the situation since 2012. Between the first quarter of 2012 and first quarter of 2016, the price of a barrel of Brent crude plummeted from 118 dollars to 34 dollars, a fall of 84 dollars in four years. If we factor in the euro/dollar exchange rate and changes in consumer prices in France, the fall amounts to a 49 euro reduction over the period (Figure 1). 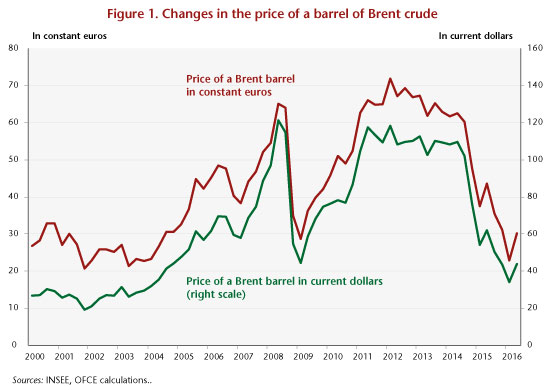 We evaluated the impact of a decline like this on France’s quarterly GDP, taking into account the above-mentioned time lag, asymmetry and phase of the business cycle.

Factoring all this in indicates that the oil counter shock ultimately did not show up much in 2015. As illustrated in Figure 2, the impact should make itself felt from the first quarter of 2016, regardless of the hypotheses adopted. The positive effect of the oil counter-shock is yet to come! 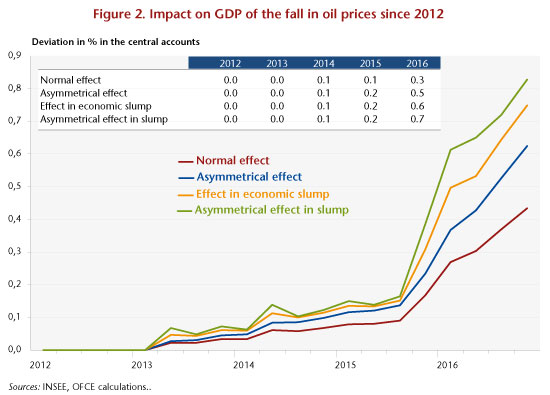