Following the INSEE’s publication of the first version of the accounts for the fourth quarter of 2017 and a first estimate of annual growth, we have been considering the outlook for 2018 and 2019 based on a comparative analysis of forecasts made for France by 18 public and private institutes, including the OFCE, between September and December 2017. This post presents the highlights of this analysis, which are given in detail in OFCE Policy Brief No. 32 of 8 February 2018 entitled, “A comparison of macroeconomic forecasts for France” and the associated working paper (No. 06-2018) (which contains the tables of the institutes’ forecasts). 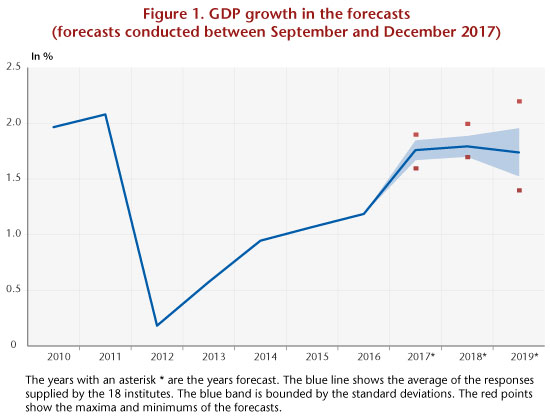 Overall, all but four of the institutes anticipate a rebalancing of the drivers of growth over the period, with trade having less of an adverse effect than in the past and domestic demand still buoyant (Figure 2). However, the recovery in foreign trade is under debate in light of the chronic losses in market shares recorded since the beginning of the 2000s. Indeed, it seems that the expected pick-up in exports in 2018 will be due more to a recovery in foreign demand for France’s output and to the rundown of the export-oriented stocks accumulated in 2016 and 2017 in certain sectors (in particular transport equipment and aeronautics) than to any recovery in competitiveness. For 2019, there are differences in opinion about the impact of the supply policies implemented since 2013 on French companies’ price and non-price competitiveness. Some institutes expect an improvement in export performance and thus a regain of market share by 2019, while others foresee a loss of share due to insufficient investment in high value-added sectors and labour costs that still burden business. 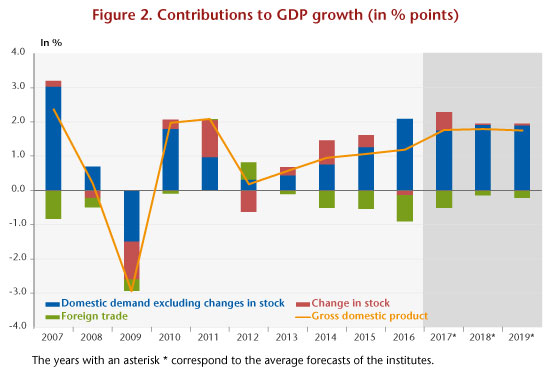 There is also debate over the forecasts for jobs and wages, in particular over the impact of the cutbacks in subsidized jobs, the effect of the policies to lower labour costs in 2019 (transformation of the CICE competitiveness tax credit into lower employer social contributions) and productivity (trend and cycle). On average, the unemployment rate should fall from 9.5% in 2017 to 8.8% in 2019, with forecasts ranging from 8.1% for the most optimistic to 9.2% for the most pessimistic. Some differences in the forecasts on wages can be attributed to differing assessments both of the degree of tension on the labour market and also of the impact on wages of the more decentralized collective bargaining set up in 2017. Wages are expected to rise by 1.8% in 2017 and on average by 1.9% in 2018 and 2% in 2019 (ranging from 1.3% for the lowest forecast to 2.6% for the highest).

In this context, growth will rise much faster than potential growth, which is estimated by most institutes at around 1.25% (some institutes expect an acceleration due to the positive impact of structural reforms and investment, while others foresee lower potential growth). While in 2017, the growth gap – the difference between observed GDP and potential GDP – is clearly negative (between -2.2 and -0.7 points of potential GDP), this will close by 2019. Most of the institutes (from those that provided us with data or qualitative information) believe the output gap will close (close to 0 or clearly positive) and inflationary pressures could appear. For four institutes, the output gap will be around -0.7 point.

Finally, for all the institutes the budget deficit should fall below the threshold of 3% of GDP by 2017. France will exit the excessive deficit procedure in 2018. But despite the vigorous growth, and in the absence of stricter fiscal consolidation, for most of the institutes the public deficit will remain high over the period.