20 billion euros in reductions on employer payroll taxes on low-wages. But will it create jobs?

By Eric Heyer and Mathieu Plane

Every year the State spends nearly 1 percentage point of GDP, i.e. 20 billion euros, on general reductions in employer payroll taxes on low wages. It is thus legitimate to ask whether a programme like this is effective. A large number of empirical studies have been conducted to try to assess the impact of this measure on employment, and have concluded that it creates between 400,000 and 800,000 jobs.

As these estimates are performed using sector models, they do not take into account all the effects resulting from a policy of reduced social contributions on low wages, and in particular the impact of macroeconomic feedback, i.e. the effect of income gains, competitiveness gains and the financing of the measure.

In a recent study published in the Revue de l’OFCE (Varia, no. 126, 2012), we have attempted to supplement these evaluations by taking into account all the impacts resulting from a policy of reducing contributions on low wages. To do this, we performed a simulation of this measure using the OFCE’s macro-econometric model, emod.fr.

We were able to break down the various impacts expected from these reductions on employment costs into two basic categories:

Based on our assessment, summarized in Table 1, the exemptions from employer social contributions on low wages lead to creating 50,000 jobs in the first year and about 500,000 at the end of five years. Of the 503,000 jobs expected within five years, 337,000 would be due to the overall substitution effect, with 107,000 linked to the macroeconomic capital-labour substitution and 230,000 to the “assessment effect” linked to the sharp reduction in labour costs on low wages. In addition, 82,000 jobs are generated by the addition to household income and 84,000 by competitiveness gains and the positive contribution of foreign trade to the change in GDP. On the other hand, the “volume effect” on employment becomes negative if the measure is financed ex post: increasing a representative mix of the fiscal structure reduces the overall impact of the measure by 176,000 jobs at 5 years; reducing a representative mix of the structure of public spending reduces employment by 250,000 at 5 years. 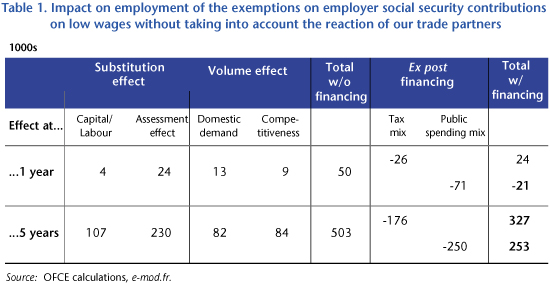 Some of the jobs created come from competitiveness gains related to taking market share from our trading partners due to lower prices of production following the reduction in labour costs. This price-competitiveness mechanism works only if, first, firms pass on the reductions in social contributions in their prices of production, and second, our trading partners are willing to lose market share without a fight. We therefore simulated a polar opposite case in which it is assumed that our trading partners respond to this type of policy by enacting similar measures, which would negate our external gains.

While this does not modify the impact on employment related to the “substitution effect”, this assumption does change the “volume effect” of the measure, eliminating 84,000 jobs from gains in market share and increasing the negative effect of ex post financing due to the measure’s multiplier effect on weaker activities. In total, in the scenario in which the measure is funded ex post and does not allow gains in competitiveness, the exemptions on employer social security contributions on low wages would create between 69,000 and 176,000 jobs within five years, depending on how it is financed (Table 2). This result puts the initial figure of 500,000 jobs into perspective. 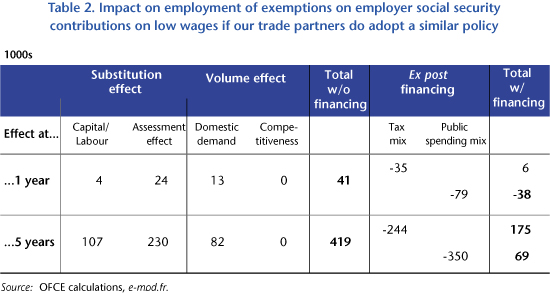