2013: what impact will the (national) fiscal measures have on growth?

This text supplements the October 2012 forecasts for the French economy

After having detailed the multiplier effects expected for the different fiscal policy instruments, the average domestic fiscal multiplier associated with the austerity measures being implemented in France in 2013 will be 0.9. This policy will cut GDP by 1.7% in one year alone. After a cumulative fiscal effort of 66 billion euros in 2011 and 2012, the structural saving expected for 2013 represents about 36 billion euros (1.8 GDP points) if we include both the measures in the 2013 budget bill (Projet de loi de finances – PLF) and the various measures adopted previously (Table). The fiscal shock resulting from the PLF for 2013 comes to 28 billion euros, of which 20 billion is solely on tax and social security contributions (prélèvements obligatoires – PO). Of the remaining 8 billion, an increase of nearly 5 billion euros in tax and social security contributions is from the second supplementary budget (Loi de finances rectificative – LFR) for the summer of 2012, the rest being mainly due to the first LFR for 2012 and to the hike in contributions resulting from the revision of the pension reform in summer 2012.

In total, the fiscal effort in 2013 can be broken down between tax and social contributions of about 28 billion euros (1.4 GDP points) and structural savings on primary public expenditure of 8 billion (0.4 GDP point). The burden of higher taxes and social contributions breaks down to nearly 16 billion euros for households and more than 12 billion for business. This breakdown does not take into account the competitiveness measures announced on 6 November by the Prime Minister. The tax credits for competitiveness and employment (CICE) will not have any fiscal impact in 2013, with the exception of the possible establishment in 2013 of an advance on their future tax credits for some companies short of cash.

Based on the variants in the fiscal multiplier, made with e-mod.fr according to the economy’s position in the cycle, for the main taxes and social security contributions as well as for the key components of public expenditure [1] and based on the different evaluations we were able to carry out, particularly in the context of the assessment of the Five-year economic programme, we applied a specific fiscal multiplier to each measure for 2013 (Table). The short-term multipliers take into account only the direct effects of the measures on domestic activity, regardless of the fiscal policies of our trading partners, which amplify the impact of national policy. It is also assumed that monetary policy remains unchanged. The long-term multiplier values differ from the short-term ones, being generally lower unless a long-term negative output gap is maintained.

Of the 16 billion euro increase in tax and social security contributions on households in 2013, the discretionary increase in personal income tax (IR) will be 6.4 billion, including 3.2 billion from the 2013 Budget Act (Loi de finances) – against 4 billion in the PLF, as the proposal to tax capital gains on securities at the income tax scale will be largely amended, and the yield from the measure could decrease by about 0.8 billion, with the shortfall being able to be offset by the extension of the exceptional 5% contribution from the IS tax on large corporations), and with the rest coming from the supplemental LFR for 2012 (including 1.7 billion solely from the de-indexation of the personal income tax schedule). While the increase in personal income tax from the 2013 PLF is targeted at high earners, the amount this will contribute (3.2 billion) represents only 11% of the increase in tax and social security contributions (20% if we limit ourselves to households) in 2013, and less than 9% of the total fiscal effort. According to our calculations, the average fiscal multiplier associated with the different measures that increase personal income tax will be 0.7 in 2013.

The increase in taxes and social contributions from households will come mainly from the increase in payroll taxes and social security contributions (8.7 billion euros) set out in the Social Security budget act (PLF) for 2013 (2.9 billion) and the measures in the supplemental LFR for 2013 (5.3 billion, which includes changes to the tax exemption on overtime, a limitation on tax breaks and employee savings, a higher CSG wealth tax on income from capital, etc.) and pension reform, with an increase in the contribution rate (0.5 billion). The average fiscal multiplier related to these measures is 0.9. Finally, the reform of inheritance tax will raise a further 1.1 billion in tax and social contributions. On the other hand, the revenue from the ISF wealth tax will be 1.3 billion lower than in 2012. Indeed, the yield from the one-off wealth tax contribution set up under the supplemental LFR for 2012 will be greater than from the one set up under the new reform in 2013. The fiscal multiplier for these two measures is 0.3.

In total, according to our calculations, the increase in levies on households in 2013 will on average have a multiplier of 0.8 and will amputate growth by 0.6 GDP point.

For business, the measures adopted mainly involve an increase in the corporate income tax as provided in the budget bill (PLF) for 2013 (8 billion euros, of which 4 billion is related to the reform of the deductibility of financial expenses). The average multiplier for the increase in the corporate income tax (IS) is estimated at 0.7 in 2013. 2.3 billion euros will come from a rise in social security contributions and payroll taxes with a fiscal multiplier of unity. Finally, other measures such as the sectoral measures on the taxation of insurance or the exceptional contribution of the oil industry will increase the tax burden on business by 1.9 billion in 2013, with an average fiscal multiplier estimated at 0.5.

In our assessment, the increase in taxes and social contributions from companies will on average have a multiplier of 0.8 and will reduce GDP by 0.5 GDP point in 2013.

In addition, the short-term fiscal multiplier associated with public expenditure in a low phase of the cycle is, in our model, 1.3, so it is higher than that associated with tax and social contributions. This result is consistent with the most recent empirical literature (for details, see the box, “Fiscal multipliers: size matters!” The estimated loss of activity resulting from tightening up on public expenditure will come to 0.5 GDP point in 2013.

In total, the average domestic fiscal multiplier associated with the austerity policy being implemented in France in 2013 will be 0.9, and this policy will reduce GDP by 1.7%. This result is in the lower range of the latest work of the IMF; using recent data on 28 countries, it has estimated the actual multipliers at between 0.9 and 1.7 since the beginning of the Great Recession. 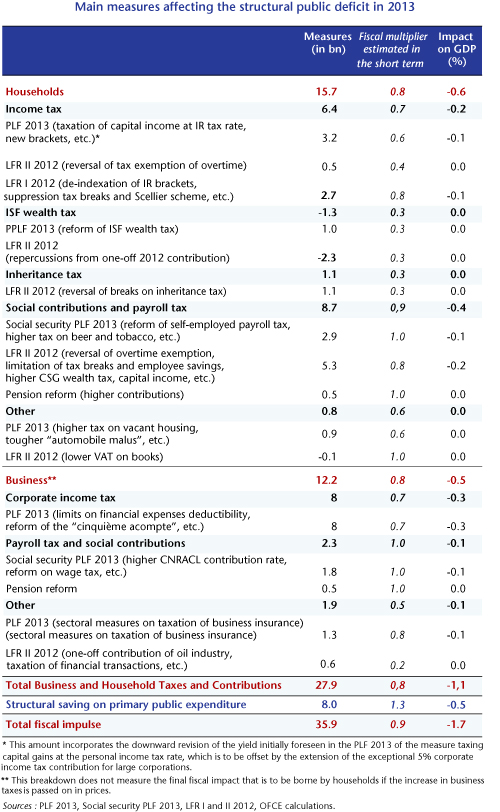