How can the current deadlock in international climate negotiations be resolved? By an optimal mix of incentives and constraints. In the case that currently opposes the European Union and the international air carriers, the EU is legitimately bringing this winning combination to bear by imposing what amounts to a carbon tax on its borders. It is brandishing a constraint, the threat of financial penalties, to encourage an industry-wide agreement that is long overdue among the airlines to reduce their greenhouse gas (GHG) emissions.

The ongoing face-off with the carriers of several major countries, which, with the more or less open support of their governments, are contesting the application of these new regulations on GHG emissions from planes flying into or out of the EU is, from this perspective, a crucial test. It is an issue with considerable symbolic value, as it represents a first: all the airlines serving airports in the EU are subject to the new measure, regardless of their nationality. On March 9th, European officials reaffirmed their determination to maintain this regulation, so long as a satisfactory solution has not been proposed by the International Civil Aviation Organization (ICAO). However, 26 of the 36 member states of the ICAO Board, including China, the United States and Russia, have expressed their opposition to the new European requirement, advising their airlines not to comply. And the Chinese government is now threatening to block or outright cancel orders for 45 Airbus aircraft, including 10 A380 super-jumbos, if the European measure is not repealed.

GHG emissions attributable to air transport account for only about 3% of global and European emissions (about 12% of total emissions from transport in the EU). But despite the progress made by aircraft manufacturers in energy intensity, these emissions, which are still modest compared to road transport, have been experiencing explosive growth over the last 20 years, and are rising much faster than those in all other sectors, including shipping (see chart). They must be controlled. 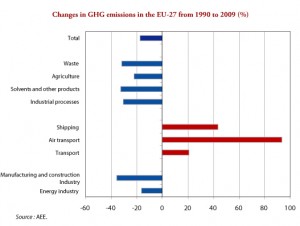 In addition, in most countries, in particular in the EU, airline fuel is not subject to the usual taxation applied to oil products, which obviously distorts competition with other modes of transport.

The new European regulations, which took effect on 1 January 2012, require all airlines serving any EU airport to acquire emission permits in an amount corresponding to 15% of the CO2 emissions generated by each trip to or from that airport. The measure is non-discriminatory, since it affects all airlines flying into or out of European air space, whatever their nationality or legal residence. This requirement, which is grounded in environmental protection, is therefore fully consistent with the Charter of the World Trade Organization (WTO).

The measure is also of course in compliance with European treaties as well as with the various provisions of international law in the field of civil aviation, as is reiterated in the judgment of 21 December 2011 by the Court of Justice of the European Union, in a case brought by several US carriers challenging its legality. The legal framework for this new provision is thus robust.

Towards the death of air transportation?

The airlines and the governments of the countries that are major emitters of greenhouse gases and that are hostile to this measure justify their outright opposition by arguing its poor timing, given the current economic climate of low growth and rising fuel costs, and its excessive cost, i.e. that the resulting rise in passenger air fares would be likely to further depress an already fragile industry.

In reality, the measure is largely symbolic and the cost is almost insignificant. Judge for yourself: according to the Air France calculator approved by the French environmental agency, the ADEME, emissions per passenger amount to just over one tonne of CO2 for a Paris-New York return trip, and approximately 1.4 tonnes for Paris-Beijing. The current price of a tonne of carbon on the European carbon market on which companies must buy emissions permits, the ETS, is just under 8 euros. The additional cost per ticket thus amounts, respectively to 2 euros for Paris-New York and 1.7 euros for Paris-Beijing! (estimates using the ICAO calculator are even lower).

Towards a trade war?

Given the current state of the legislation, the threats to cancel Airbus orders or similar retaliatory trade measures are obviously out of proportion to the economic impact of the tax on the European skies. To fear that this might trigger a “trade war” is also to forget that such a war has already been declared in industry, particularly in the aviation sector (with the multiplication of more or less disguised subsidies, including in Europe, and with the use of exchange rates as a veritable weapon of industrial policy). Furthermore, agreements or cancellations of orders in this sector are in any case very often influenced by the political context, sometimes for dubious reasons (as in the case of diplomatic reconciliation with relatively distasteful regimes). In this case the cause, the defence of the integrity of Europe’s climate policy, is legitimate.

The various threats and blackmail attempts being taken up by the pressure groups targeted, in this case air passengers, are intended to sway governments for obtaining short-sighted gains. They are targeting particular countries, foremost among them Germany and Poland, which are currently dragging their feet in accepting the EU Commission’s proposal to accelerate the pace of European emissions reduction by raising the goal of emissions reduction for 2020 from 20% to 30% (compared to 1990 levels). As is their right, on the climate issue Germany and Poland have been following an approach that is in accordance, respectively, with a growth strategy based on exports and an energy strategy based on coal. In both cases, these are national decisions that should not take precedence over the European approach. From the perspective of Europe’s interests, there is therefore no valid reason to yield to these pressures even if some member states become involved.

By confirming its determination, the EU can provide proof that leadership by example on the climate can go beyond simply setting a moral example and lead to actual changes in economic behaviour. The EU can ensure that everyone sees that, despite the impasse at the global level, a regional climate strategy can still be effective. If its approach is confirmed, the success of the European strategy, which consists of encouraging cooperative strategies under the threat of credible sanctions, would point towards a way to break the deadlock on climate negotiations.

The European Union will, in the coming weeks, be passing through a zone of turbulence (yet another) on the issue of its border carbon tax. It would be legally absurd and politically very costly to make a U-turn now: instead, let’s fasten our seat belts and wait calmly for the stop light to change.