By Eric Heyer and Raul Sampognaro

In 2015, the euro zone economies will benefit from a favourable “planetary alignment” (with the euro and oil prices down and financial constraints on the economy easing), which should trigger a virtuous circle of growth. Over the previous four years (2011-2014), the “planetary alignment” that existed was in a diametrically opposite direction: the euro and oil prices were high, with financing conditions and the fiscal stance very tight.

In a recent article, we propose an evaluation of the impact of these four factors on the economic performance of six major developed countries since 2011 (France, Germany, Italy, Spain, the UK and USA).

It is clear from our analysis that the combination of these shocks explains a large part of the differences in growth recorded during the period 2011-2014 between the United States and the major European economies. A non-negligible part of this performance gap is explained in particular by the difference in the economic policies adopted, with a policy mix that has been much more restrictive in the euro zone than in the case of the US. In particular, a very sharp fiscal adjustment took place in the countries experiencing pressure on their sovereign debt, such as Spain and Italy. In addition, the effects of the pressure on sovereign debt were multiplied by financial fragmentation, which can be seen in the deterioration of private sector financing terms, whereas the quantitative easing measures taken by the Fed and the Bank of England helped to prop up financing conditions in these countries. It was not until Mario Draghi’s speech in July 2012 and the announcement of the OMT programme in September 2012 that the ECB’s actions were sufficient to reduce the financial pressure. While exchange rate trends tended to support activity in the euro zone throughout 2011-2014, the contribution of this factor depended on the way the various countries were integrated with global trade flows [1] and on the scale of wage disinflation, which was particularly pronounced in Spain. Finally, the rise in oil prices held back Europe’s growth, while it had less impact in the United States, which benefited from the exploitation of shale oil. 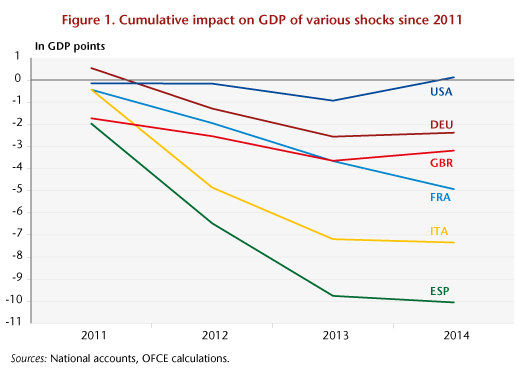 Thus, in the absence of these shocks, Europe’s spontaneous growth could have exceeded the rate of potential growth, as in the United States (Figure 2). This would have led in the euro zone countries in particular to a long-term convergence of GDP with its potential level, to a reduction in imbalances on the labour market, to the normalization of capacity utilization, and to a recovery in the public accounts. 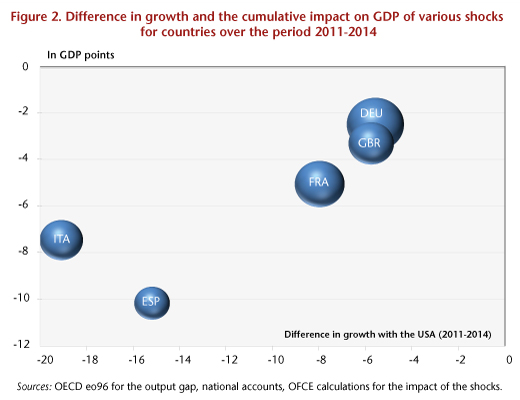 Go to the full version of our study.

[1] The impact of these competitiveness shocks differs across countries because of differences in the elasticity of foreign trade, but also due to variations in the countries’ degree of exposure to trade and to intra / extra euro zone competition. For more on this, see Ducoudré and Heyer (2014).

[2] An economy’s spontaneous growth results from its long-term potential growth (which depends on structural factors that determine in particular changes in the global productivity of the factors and the labour force) and the rate of closing the output gap, which was deepened in most countries by the 2008-2009 crisis and which depends on an economy’s capacity to absorb the shocks that hit it.