An end to growth?

This text relies on the 2016-2018 forecast for the global economy and the euro zone, the full version of which is available here, in French.

After avoiding a Grexit in the summer of 2015, Europeans will now have to face a Brexit. In addition to what should be a significant impact on the UK economy lies the question of the effect this shock will have on other countries. Given that all the indicators seemed to be green for finally allowing the euro zone to recover from the double-dip recession following the 2007-2008 financial crisis and then the sovereign debt crisis, will a Brexit risk interrupting the trend towards a recovery? This fear is all the more credible as the delayed recovery was not sufficient to absorb all the imbalances that built up over the years of crisis. The unemployment rate for the euro zone was still over 10% in the second quarter of 2016. A halt to growth would only exacerbate the social crisis and in turn fuel doubt – and therefore mistrust – about Europe’s ability to live up to the ambitions set out in the preamble to the Treaty on the Functioning of the European Union and reiterated in Lisbon in 2000.

Nevertheless, despite fears of a new financial shock, it is clear that it hasn’t happened. Brexit will of course be the fruit of a long process that has not yet started, but it seems that the worst has been avoided for now. The British economy will see growth halved in 2017. But the short-term negative effects on other euro zone countries should be fairly limited, except perhaps Ireland which is more interdependent on the United Kingdom. In any case the global recovery should continue, but growth will be down in the euro zone from 1.9% in 2015 to 1.3% in 2018.

The many factors that helped initiate the recovery[1] will to some extent lose steam. The price of oil has already begun to rise after hitting a low of under USD 30 in January 2016. It is now once again over 50 dollars a barrel. As for the euro, it has fluctuated since the beginning of the year at around 1.10 dollar, while in 2014 and 2015 it depreciated by 12.5% and 11.3%, respectively. In contrast, the European Central Bank has stuck to its expansionary monetary policy, and fiscal policy is much less restrictive than from 2011 to 2014. In 2015 and 2016, the aggregate fiscal impulse was even slightly positive.

Finally, world trade is slowing significantly, well beyond what would be expected simply from the change in China’s economic model, which is resulting in a deceleration of imports. There were hopes that after the recovery kicked off, a virtuous cycle of growth would be triggered in the euro zone. Higher growth partly driven by exogenous factors would lead to job creation, higher incomes and better prospects for households and businesses. These elements would be conducive to a return of confidence and in turn stimulate investment and consumption. The dynamics of productive investment in France and Spain in the last quarter have given credence to this scenario.

The recovery will certainly not be aborted, but this rate of growth seems insufficient to reduce the imbalances brought about by long years of recession and low growth. At the end of 2018, the unemployment rate in the euro zone will still be nearly 2 percentage points higher than at end 2007 (graphic). For the five largest countries in the euro zone, this represents nearly 2.7 million additional people without jobs. In these conditions, it is undoubtedly the social situation of the euro zone which, even more than Brexit, is putting the European project in jeopardy. Europe certainly cannot be held solely responsible for low growth and high unemployment in the various countries, but the current forecast indicates that we have undoubtedly not achieved the goals that were set in Lisbon in 2000, i.e. making the European Union “the most competitive and dynamic knowledge-based economy in the world capable of sustainable economic growth with more and better jobs and greater social cohesion”. 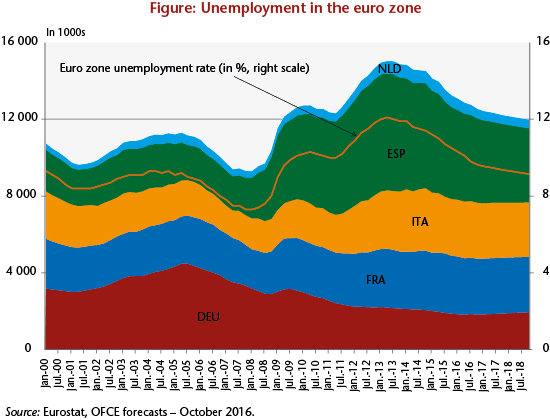 [1] View See the OFCE’s earlier synthesis (in French) of the international outlook (summarized here in English).