From austerity to stagnation

Since 2010, the European Commission has published the Annual Growth Survey to stimulate discussion on the occasion of the European semester, during which the governments and parliaments of the Member States, the Commission, and civil society discuss and develop the economic strategies of the various European countries. We considered it important to participate in this debate by publishing simultaneously with the Commission an independent Annual Growth Survey (iAGS), in collaboration with the IMK, a German institute, and the ECLM, a Danish institute. In the 2014 iAGS, for instance, we estimate the cost of the austerity measures enacted since 2011. This austerity policy, which was implemented while the fiscal multipliers were very high and on a scale unprecedented since the Second World War, was followed simultaneously by most euro zone countries. This resulted in lopping 3.2% off euro zone GDP for 2013. An alternative strategy, resulting after 20 years in the same GDP-to-debt ratios (i.e. 60% in most countries), would have been possible by not seeking to reduce public deficits in the short term when the multipliers are high. In order to lower the fiscal multipliers again, it’s necessary to reduce unemployment, build up agents’ balance sheets and get out of the liquidity trap. A more limited but ongoing adjustment strategy, just as fiscally rigorous but more suited to the economic situation, would have led to 2.3 additional points of GDP in 2013, which would have been much better than under the brutal austerity we find ourselves in today. This means there would not have been a recession in 2012 or 2013 for the euro zone as a whole (see the figure below: GDP in million euros). 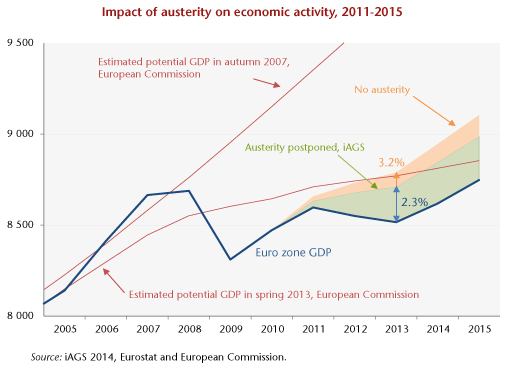 It is often argued that the state of euro zone public finances left no choice. In particular, market pressure was so great that certain countries, like Greece for example, were concerned that they would lose access to private financing of their public debt. The amounts involved and the state of the primary deficit are advanced to justify this brutal strategy and convince both the markets and the European partners. However, the sovereign debt crisis, and hence market pressure, ended when the European Central Bank announced that no country would leave the euro and set up an instrument, Outright Monetary Transactions, which makes it possible under certain conditions to buy back public debt securities of euro zone countries and therefore to intervene to counter the distrust of the markets (see an analysis here). From that point on, what matters is the sustainability of the public debt in the medium term rather than demonstrating that in an emergency the populace can be compelled to accept just any old policy. Sustainability does however require an adjustment policy that is ongoing (because the deficits are high) and moderate (because fiscal policy has a major impact on activity). By choosing the difficult path of austerity, we paid a high price for the institutional incoherence of the euro zone, which was exposed by the crisis. In the 2014 iAGS, we point out costs due to austerity that go beyond the loss of activity. On the one hand, inequality is increasing, and “anchored poverty”, i.e. as measured from the median incomes of 2008, is increasing dramatically in most countries affected by the recession. The high level of unemployment is leading to wage deflation in some countries (Spain, Portugal and Greece). This wage deflation will result in gains in cost competitiveness but, in return, will lead the countries’ partners to also take the path of wage deflation or fiscal devaluation. Ultimately, the adjustment of effective exchange rates either will not take place or will occur at such a slow pace that the effects of deflation will wind up dominant, especially as the appreciation of the euro will ruin the hopes of boosting competitiveness relative to the rest of the world. The main effect of wage deflation will be a greater real burden (i.e. relative to income) of private and public debt. This will mean a return to centre stage of massive public and private defaults, as well as the risk of the euro zone’s collapse. It is possible nevertheless to escape the trap of deflation. Possible methods are explored and calculated in the 2014 iAGS. By reducing sovereign spreads, the countries in crisis can be given significant maneuvering room. The levers for this include the continuation of the ECB’s efforts, but also a credible commitment by the Member states to stabilizing their public finances. Public investment has been cut by more than 2 points of potential GDP since 2007. Re-investing in the future is a necessity, especially as infrastructure that is not maintained and is allowed to collapse will be extremely expensive to rebuild. But it is also a way to stimulate activity without compromising fiscal discipline, since the latter must be assessed by trends not in the gross debt but in the net debt. Finally, the minimum wage should be used as an instrument of coordination. Our simulations show that there is a way to curb deflationary trends and reduce current account imbalances if surplus countries would increase their minimum wage faster in real terms than their productivity while deficit countries would increase their minimum wage slower than their productivity. Such a rule, which would respect both national practices in wage bargaining as well as productivity levels and the specific features of labour markets, would lead to gradually reducing macroeconomic imbalances in the euro zone.