Since 2008, monetary policy has been in the forefront of efforts to preserve financial stability and stem the economic crisis. Though the Great Recession was not avoided, the lessons of the crisis of the 1930s were learned. The central banks quickly cut short-term interest rates and have kept them at a level close to zero, while developing new monetary policy instruments. These so-called unconventional measures led to an increase in the size of balance sheets, which exceed 20% of GDP in the United States, the United Kingdom and the euro zone and 45% in Japan. Among the range of measures employed was the central banks’ purchase of public debt. The goal was to lower long-term interest rates, either by signalling that monetary policy will remain expansionary for an extended period, or by modifying the composition of the asset portfolios held by private agents. However, the Federal Reserve recently announced that it would gradually reduce its interventions (see here), which could cause a rapid rise in interest rates like that seen in May 2013 (Figure 1) upon the previous announcement of this type. In a context of high public debt, interest rate dynamics are crucial. The central banks need to take into account the enhanced interaction between monetary and fiscal policy by coordinating their decisions with those taken ​​by governments.

In normal times [1], monetary and fiscal policy pursue common goals, foremost among them macroeconomic stability. There are therefore interactions between the decisions taken by the two authorities. A tightening of monetary policy via an increase in interest rates could for instance counteract a fiscal expansion, and vice versa. It is thus necessary to coordinate economic policy in order to ensure the best macroeconomic balance. The implementation of unconventional monetary policy measures enhances these interactions. The adoption of unconventional measures has led central banks to buy government debt, to such an extent that, with the exception of the ECB, these banks hold a significant portion of the outstanding debt (Figure 2). In doing this, their operations are interfering with the management of debt, which is usually vested in the Treasury. The link between monetary policy and debt management is not new, though it receded as central banks became independent institutions with a primary objective of price stability, which they seek to achieve exclusively by changing the key interest rate. Goodhart [2] (2010) clarifies that this role was historically devolved on them. Nevertheless, the objectives of the central bank and of the agency responsible for issuing public debt may be contradictory (Blommestein and Turner [3], 2012), as the Treasury seeks to minimize the cost of debt service, regardless of the macroeconomic impact of its decisions. Two additional interactions can emerge. On the one hand, the government may partially counteract the central bank’s actions on long-term rates by seeking to profit from their decline through additional issues on the maturities targeted by monetary transactions. The excess demand is then partially absorbed by an additional supply for a given maturity. This is what has happened in the United States, as the average maturity of the debt rose from 48.5 months in October 2008 to 64 months in May 2012. Recent work by Chadha, Turner and Zampolli [4] (2013) suggests that this policy of managing the maturity of the public debt supply has a significant impact on interest rates. The minutes of the US Treasury meeting on 2 November 2010 illustrate the potential conflict between objectives: “It was pointed out by members of the Committee that the Fed and the Treasury are independent institutions, with two different mandates that might sometimes appear to be in conflict.  Members agreed that Treasury should adhere to its mandate of assuring the lowest cost of borrowing ….  A couple [of] members noted that the Fed was essentially a ‘large investor’ in Treasuries and that the Fed’s behavior was probably transitory. As a result, Treasury should not modify its regular and predictable issuance paradigm to accommodate a single large investor.”

On the other hand, the reduction in the portfolio of government securities held by the central bank should lead to higher long-term rates. This is in any case what is suggested by some of the recent literature on the impact of unconventional monetary policies. The dynamics of bond yields observed in May 2013 (Figure 1), the first time that the markets anticipated [5] a steady decline in purchases by the Federal Reserve, shows that the increase may be rapid and cause high volatility on the financial markets. The explanation for this increase may be related to the end of or the unwinding of arbitrage operations carried out ​​by investors who took advantage of low long-term interest rates in the industrialized countries in order to take on debt and seek more profitable investments in other markets, in particular the emerging markets. The consequences of such a scenario must be taken into account by the central banks. If the conduct of monetary policy involves making fewer central bank interventions, then the impact on debt service of this pull-back needs to be factored in. Despite the process of public debt reduction, government financing needs will stay high, and additional refinancing costs due to higher interest rates could lead States to strengthen fiscal consolidation, which would have adverse effects on economic activity. Conversely, the maintenance of low interest rates could greatly contribute to facilitating fiscal adjustment by allowing low-cost refinancing and by giving a stimulus to the economy, thereby reducing the recessionary impact of the fiscal adjustment.

Due to the nature of these interactions, to a macroeconomic context marked by a high level of public debt, and to the risk of financial instability, it is essential to coordinate monetary and fiscal policy. This necessity is illustrated perfectly in the case of the United States in an observation by James Tobin quoted by Turner[6] (2011): “The Federal Reserve cannot make rational decisions of monetary policy without knowing what kind of debt the Treasury intends to issue. The Treasury cannot rationally determine the maturity structure of the interest-bearing debt without knowing how much debt the Federal Reserve intends to monetize.”

In Europe’s case, this seems to be a second-order question, since the ECB has a small portfolio of assets (Figure 2). While taking note that this portfolio is concentrated on bonds issued by certain countries (Italian, Spanish, Portuguese, Greek and Irish), whose public debt represents 42% of euro zone debt, the outstanding debt held by the ECB comes to 5% when considering only the countries in crisis. It’s regrettable that the ECB has not taken a more active monetary policy, which would have made it possible to effect a major uniform reduction in interest rates in all the euro zone countries, which would have helped to reduce the need for fiscal consolidation and mitigate its negative effects. 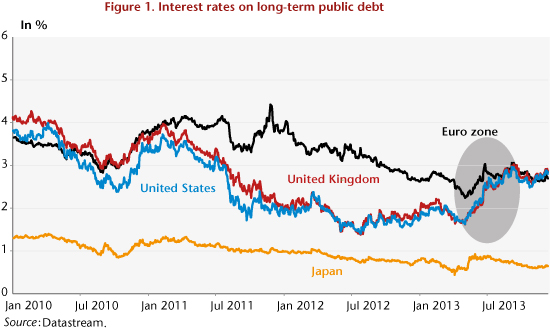 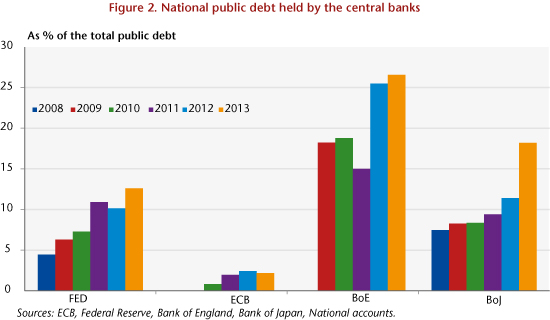 [1] Here the expression “in normal times” refers to the fact that the conduct of monetary policy is usually characterized by decisions taken by the central banks on the key interest rate, which is a short-term rate. During the crisis, the central banks set this key rate at a very low level, near to the zero lower bound, and so turned to new measures to strengthen the expansionary character of monetary policy.

[5] These expectations were initially fuelled by the improving jobs situation in the United States and then by Ben Bernanke’s statement confirming a possible pull-back by the Federal Reserve. These elements are described in more detail by the BIS in its Quarterly Review, September 2013.