The idea that we must put an end to the use of oil and coal is not new. It has been pushed for a long time by NGOs like 350.org and its gofossilfree campaign. What is more striking is that the Democratic primary candidate Senator Bernie Sanders has put the proposal at the heart of the US presidential election debate. Institutional investors and large fund holders have also announced their intention to limit or terminate their investments in coal (for example, Allianz and ING) and oil (the Dutch pension fund ABP). The urban development policies of some large cities are also leaning in that direction. Asked about this option, the head of the US Environmental Protection Agency (EPA), Gina McCarthy, noted (cautiously) that this option was not irrational. 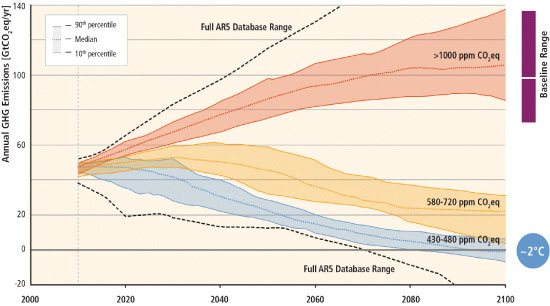 That said, Figure SPM 11 of the 5th IPCC report says much the same thing. If global warming is to be kept to 2 degrees, our carbon budget since 1870 amounts to 2900 ± 250 GtCO2e; we have consumed around 1900 GtCO2e up to now. So staying below the 2°C level (relative to pre-industrial times) with a probability of 66% leaves about 1000 GtCO2e. Given an annual flow of emissions of about 50 GtCO2e, a simple rule of three give us 40 years of linearly decreasing emissions. The inclusion of carbon sinks, climate inertia and negative radiative forcings on the climate extends the time horizon to 2090 ± 10 years, but it would be prudent to get down to zero emissions earlier. For the record, there are still about 5000 ± 1400 GtCO2 of recoverable reserves in coal alone, enough to greatly exceed our current carbon budget. Note that stopping the use of fossil fuels does not solve everything. A portion of current greenhouse gas emissions (of CO2, but also of methane and other gases) is not linked to fossil fuels but to farming, deforestation and industrial processes. In the case of a nearly 100% system of renewable energy, the gas would be necessary during consumption peaks. These non-fossil emissions can be cut down, but not eliminated. It is possible to have negative emissions, but the only “technology” available today is reforestation, which can help lower emissions by only 2 GtCO2 annually. Carbon capture and storage is also a way to conserve the use of fossil fuels provided that it works and that it has enough storage capacity (once the storage capacity is depleted, the problem remains).

The principle of “common but differentiated responsibility” would lead the developed countries to apply constraints more quickly (by say around 2050). Some see this prospect as the explanation for the fall in oil prices. Since not all fossil fuel reserves will be burned, the only ones worth anything are those that will be exploited before 2050, meaning that this price is lower than what would result from rising demand. Saudi Arabia therefore has an interest in increasing production rather than keeping worthless reserves. Mark Carney, Governor of the Bank of England and Chairman of the Financial Stability Board, has evoked “stranded reserves” in the same way that a coal plant is a “stranded asset”, i.e. a blocked asset that has to be depreciated prematurely.

The end of oil and coal is no longer just a fad of a handful of green activists. This is also seen in the persistent and nearly convergent calls of many economists about a carbon price. A high and rising price of carbon would force economic agents to disinvest in the capital that emits carbon or even to prematurely depreciate existing facilities. When a high carbon price is demanded (say between 50 and 100 € / tCO2, with the price of carbon steadily increasing over time as the carbon budget runs out), the point is that this sends a strong price signal to economic agents, with the consequence of this price being that emissions are reduced in an amount consistent with warming of less than 2°C compared to pre-industrial times. So, from this viewpoint, saying that “the price of carbon should be 50 € / tCO2 or more” is equivalent to saying “everything must be done so that we stop using coal and oil within the next half century”. The price of carbon thus gives us valuable information about the cost of the transition. It will be on the order of (a few) 1000 billion euros per year (on the scale of the global economy). Proposing a price means proposing the “polluter pays” principle (carbon emitters must pay), even though it is not clear exactly whom the polluters must pay. Hence the debate on the Green Fund and climate justice that is at the centre of COP21.

It would be a shame to focus on the carbon price and make it the central issue of COP21. A zero-carbon economy is our future, and we will have no excuses if we continue to burn fossil fuels. As Oscar Wilde remarked: “Nowadays people know the price of everything and the value of nothing.”