“The ways of thinking society, managing it and quantifying it are indissolubly linked”

The subject of working poverty emerged in Europe in public debate and academic discussion in the early 2000s, in parallel with the implementation of policies to “make work pay”. European guidelines on employment have explicitly mentioned the need to reduce working poverty since 2003, and Eurostat set up an indicator on the working poor in 2005 (Bardone and Guio). In France, policies to make work pay have taken the particular form of earned income supplements (PPE, then RSA). In Germany, a series of reforms of the labour market and social welfare (the Hartz Laws) were introduced in the early 2000s with the aim of activating the unemployed. Critics of the German reforms often highlight the proliferation of atypical forms of employment (Alber and Heisig, 2011): the recourse to part-time, low-wage work and mini-jobs without social protection. In France as in Germany, this focus on workers has masked a less well-known aspect of the changing face of poverty: among working-age people, it is poverty among the unemployed (the “inactive” in France, the “unemployed” in Germany) that has been on the rise since the late 1990s.

Figure 1 shows the change in the poverty rate for individuals between 1996 and 2010, calculated at the threshold of 60% of the median living standard, according to their employment status. Two points stand out. First, poverty primarily affects the unemployed: their poverty rate was about 35% over this period. Second, economically inactive people over age 15, who are neither students nor retired (called “other inactive”), i.e. the “discouraged unemployed” and men and women (especially women!) in the home, are the group most affected by the rise in poverty. Their poverty rate was 23% in 1996, but hit 32% in 2010. At the same time, poverty among people in work fell from 9% to 8%. As a result, while the economically active with jobs accounted for 25% of the poor in 1996 and “other inactive” 12%, the latter’s share of the poor rose to 17% in 2010 while the share of the active declined to 22%. The weight of the working poor among all poor people is tending to decrease, while the weight of the inactive is rising. 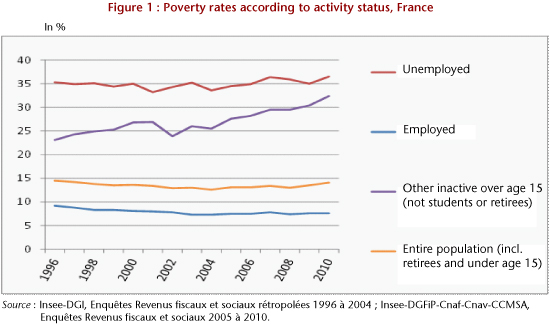 As for Germany, the analysis of poverty rates by employment status is fraught with discrepancies attributable to the sources, in particular with regard to changes in the poverty level among the unemployed, which according to Eurostat (EU-SILC survey) is much higher than in the national SOEP survey (see Figure 2). Despite the statistical uncertainties, it is still clear that poverty affects the unemployed above all, and that their poverty rate has risen substantially: from 30% to 56% between 1998 and 2010, according to the SOEP survey, which is generally considered more reliable than the SILC (Hauser, 2008). While poverty is increasing for all categories of the population (see Heyer, 2012), it is among the unemployed that it is most pronounced.

The increase in poverty among the jobless is the result of certain provisions of the Hartz IV laws, which are less well known than those establishing mini-jobs (Hartz II). Prior to this legislation, the jobless could receive unemployment benefits for a maximum period of 32 months, after which they could receive means-tested unemployment assistance for an indefinite period (Ochel, 2005). But unlike the ASS benefit [i] in France, the amount of this assistance depended on the net income at the last job and provided a relatively generous replacement rate (53% of net income for people without children). This system was replaced starting in 2005 by a much less generous compensation, based on the goal of employment activation. Unemployment benefit (Arbeitslosengeld I – ALG I) was limited to 12 months for unemployed people under age 55, and the grounds for penalties were expanded. Following this period, unemployment assistance (Arbeitslosengeld II – ALG II) is greatly reduced and essentially serves only as an ultimate safety net: the amount for a single person is limited to 345 euros per month, while the penalties have also been expanded and toughened [ii]. Germany’s strategy to promote employment hence uses two levers: reducing income support for the unemployed, and penalties. While this policy may have contributed to lowering unemployment (see Chagny, 2008, for a discussion of the controversial impact of this reform), by its very design it has had a significant impact with regard to poverty among the unemployed. 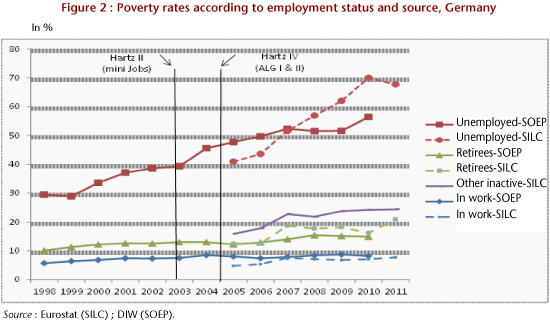 One paradox that needs to be examined is the only small change since the early 2000s (at least according to the SOEP survey) of the poverty rate among people in work. Indeed, during this period, the proportion of low-wage workers rose and the recourse to part-time work increased sharply, without a substantial rise in the poverty rate for people in work. In 2010, 4.9 million people (12% of people in work) held a mini-job for which they cannot receive more than 400 euros per month in earned income (Alber and Heisig, 2011). There has also been the growth of part-time work with social protection (from 3.9 million jobs in 2000 to 5.3 million in 2010). We would expect therefore to see an increase in working poverty. But this is being countered by two factors: the development of opportunities for cumulation with unemployment benefits (the third lever of the employment activation policy), and family solidarity. Indeed, part-time and low-wage jobs are predominantly held by women, who account for two-thirds of workers on low annual incomes [iii]. The income of their spouse, when they have one, often enables them to avoid poverty, as the income of all household members is aggregated to determine the standard of living and poverty. In this respect, to paraphrase Meulders and O’Dorchai, the household is a fig-leaf concealing women’s low incomes. Lone mothers, on the other hand, are especially affected by poverty: the poverty rate is about 40% among single-parent families.

From the perspective of the indicators, the use of the category “working poor” thus poses several problems. First, the category hides the role of unemployment and inactivity as determinants of poverty; by its very name, it highlights one important determinant of working poverty (“work doesn’t pay”) in relation to other determinants (“small number of hours worked” or “heavy family responsibilities”). Public policies based on this approach thus run the risk of limiting the population targeted by the fight against poverty (in France, people on unemployment benefit are excluded from the RSA-activité [income supplement for the working poor]) and of focusing on strengthening financial incentives for returning to work in order to stimulate the supply of labour, even though the high level of unemployment is related to the demand-side rationing of labour. Second, the category is blind to gender inequality: women are more often poor and constitute the majority of low-wage workers, but they are less likely to be working poor! (Ponthieux, 2004) If all that we manage well is what we measure, it is necessary that the measure be easily interpreted by policy makers. Reducing inequalities in living standards (between households) and in earned income (between individuals) are two legitimate public policy goals (as explained here [in French]), which need to be measured separately, just as these two goals require the use of specific instruments.

From the standpoint of public policy, the change in poverty based on employment status in France and Germany emphasizes that an effective fight against poverty requires addressing all forms of poverty. For the working-age population, in economies where dual-earner couples have become the norm, this means putting in place policies on full-time work and full employment policies that do not foster atypical forms of work. This requires, from a macroeconomic point of view, growth or job-sharing (and the associated income-sharing) and, from a microeconomic point of view, meeting needs with respect in particular to childcare, training and transport. While these policies are costly, more economical measures, such as strengthening financial incentives, have failed to demonstrate that they can actually reduce overall poverty.

[i] The Allocation de solidarité spécifique (ASS), means-tested benefits paid to unemployed persons whose right to unemployment benefits has expired.

[iii] Set at the threshold of two-thirds of median salary.