France: will the war of the 3% take place?

This text summarizes the OFCE’s October 2012 forecasts for the French economy.

The French economy is expected to see average annual growth of 0.1% in 2012 and 0.0% in 2013. This performance is particularly poor and far from the path that an economy recovering from a crisis would normally experience.

Four years after the onset of the crisis, the French economy has real potential for a rebound: this should lead to spontaneous average growth of about 3.0% per year in 2012 and 2013, making up some of the output gap built up since the start of the crisis. But this spontaneous recovery is being hampered, mainly by the establishment of budgetary savings plans in France and throughout Europe. The fiscal consolidation strategy imposed by the European Commission is likely to slice nearly 6 percentage points off GDP in France during 2012 and 2013.

By setting a pace that is far from its potential, the expected growth will increase the output gap accumulated since 2008 and will lead to a further deterioration on the labour market. The unemployment rate will rise steadily and hit 11% by late 2013.

Under these conditions, should the government do whatever it can to fulfil its commitment to a 3% deficit in 2013?

In a context of financial uncertainty, being the only State not to keep its promise of fiscal consolidation is a risk, i.e. of being punished immediately by an increase in the financial terms on the repayment of its debt. This risk is real, but limited. The current situation is that of a “liquidity trap” and abundant savings. The result is a “flight to quality” phenomenon on the part of investors seeking safe investments. But among these are both German and French government bonds. Under these conditions, reducing the government deficit by 1 GDP point instead of 1.5 point would have very little impact on French bond rates.

However, maintaining a target of a 3% deficit in 2013 could have a dramatic impact on economic activity and employment in France. We simulated a scenario in which the French government maintains its budgetary commitment regardless of the costs and the economic situation. If this were to occur, it would require the adoption of a new programme of budget cuts in the coming months in the amount of 22 billion euros.

This strategy would cut economic activity in the country by 1.2% in 2013. It would lead to a further increase in the unemployment rate, which would reach 11.7% at year end, nearly 12%. As for employment, this obstinacy would intensify job losses, costing nearly 200,000 jobs in total.

A darker scenario is also possible: according to our forecasts, and taking into account the draft budget bills known and approved, no major European country would meet its deficit reduction commitments in 2013. By underestimating the difficulty of reaching inaccessible targets, there is a high risk of seeing the euro zone countries locked into a spiral where the nervousness of the financial markets would become the engine driving ever greater austerity. To illustrate this risk, we simulated a scenario in which the major euro zone countries (Germany, France, Italy and Spain) implement new austerity measures to meet their deficit targets in 2013. Adopting such a strategy would result in a strong negative shock to economic activity in these countries. For the French economy, it would lead to additional austerity that either at the national level or coming from its euro zone partner countries would cause a severe recession in 2013. French GDP would fall by more than 4.0%, resulting in a further increase in the unemployment rate, which would approach 14%. 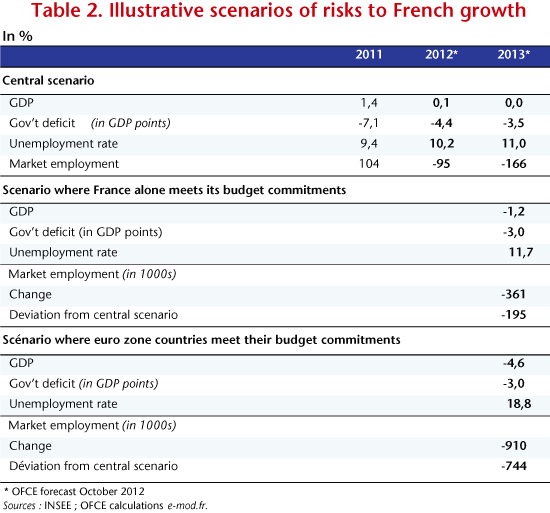