Is government expenditure in France too high?

Since 2005, France has vied with Denmark for first place in terms of government expenditure as reported by the OECD. Since the ratio of “government expenditure” to GDP reached 56.6% in 2010, it has been necessary, according to a widely held view, to “deflate” a State that is taking up “too much” space in the economy. First place would thus be, not a badge of honour, but a sign that we have reached an unsustainable level of “government expenditure”. Since, moreover, it is essential to reduce the public deficit, the path ahead is clear: reducing public spending is the only way to bring public finances under control. But this simplistic analysis is wrong.

What is called “government expenditure” combines, on the one hand, collective expenditures (e.g. from maintenance of the security forces to public administration and the fight against poverty) and, on the other, insurance-related transfer expenditures. This transfer spending covers pension insurance and health insurance. These are individualizable in the sense that we know the direct beneficiary of the expense (which is not the case for administrative expenditures, for which the benefits are diffuse), and they are funded by contributory schemes: to qualify for coverage, it is necessary to have contributed. In most countries, the pension system is almost completely contributory, in the sense that the relative level of benefits for individuals of the same age is related to their relative contributions. The rate of return on the contributions (which relates the expected present value of the flow of pension benefits to the present value of the contributions) is comparable to that obtainable over a long period by capitalizing savings. The minimum pension payment, family benefits and survivor benefits might seem to deviate from this contributory principle, but in practice these “benefits” compensate for short careers that have been interrupted by the accidents of life and do not differ much from a contributory scheme. With regard to health, another pillar of the modern welfare State, the contributory aspect is mitigated by the redistribution effected by a contribution that is proportional to income and an expense that depends on age and not much on income (with the exception of daily allowances). When health care provision is universal, some people benefit without having contributed, but these cases are marginal and do not alter the quasi-contributory character of our health systems.

Depending on the country, the pooling of transfer expenditures takes various organizational forms. It may be done inside the company, within sector-wide organizations, or by management and trade union bodies or it may be mediated by central government. The particularity of France is that social protection is mainly organized through the State’s intermediation. This is not the case in other countries like the United Kingdom, the United States or Germany. Even unemployment insurance, which is handled by management/union bodies, is treated by the national accounts as pertaining to the public sector, and UI contributions are considered compulsory levies (automobile insurance premiums, although imposed on anyone who uses the roads, are not classed as levies). 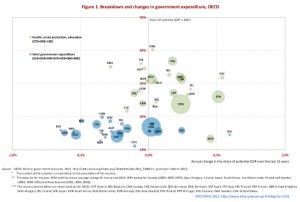 Figure 1 shows the unique position of France. In 2010, “government expenditure” in the strict sense (that is to say, not individualizable, such as domestic and foreign security, administration, miscellaneous expenditure on interventions) represented 18.2% of the country’s GDP. In terms of this “strict government expenditure”, in 2009 France ranked 10th among the OECD countries (see also Figure 2). If the “competition for being thin” covered only expenditure in this narrower sense, France would be relatively average compared to other bigger-spending countries like the United States, Portugal and Italy. Moreover, unlike the UK, the US or Ireland, over the last 20 years France has cut “strict government expenditure”, in a rather unexpected demonstration of fiscal control.

Figure 1 also shows that there is not great variation among the OECD countries with respect to the hard core of “government expenditure”. A developed country needs security, public administration and expenditure on interventions. It is difficult to compress this kind of State spending; the difference between the State with the largest expenditure (Hungary) and that with the smallest (Switzerland) is 8 GDP points. If we limit ourselves to large States, the gap is smaller (a difference of 3.6 GDP points between Japan and Italy). In contrast, with respect to “government social expenditure”, the differences between countries are major: the gap between Korea and Denmark is 27 GDP points, and, among the major countries, 13 GDP points between the United States and France. This makes ​​France, along with Denmark, Sweden, Austria and Finland, a country where “government social expenditure” in relation to GDP is high. 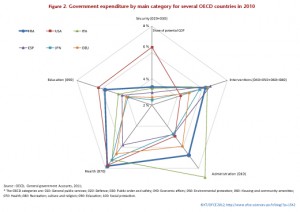 Can we conclude from these data that the French system of social protection is more generous than in other countries? And that this is the cause of an unsustainable public debt (Figure 3)? Can we say that the system is too generous and that we must reverse the course of the past 20 years by reducing the share of social spending in GDP? No, the data tell us only one thing: that social welfare, health and education in France are dispensed directly by the State, which provides funding for these through the tax system. In other countries, intervention by the State (or by local authorities) may be just as massive (for instance, by defining specifications for education, prices of treatments or medications, or obligations to take out health or retirement insurance), but the performance of the service or the distribution of the benefit may be delegated to a non-public entity. In some countries, only a portion of health or retirement coverage is mandatory, and individuals are then “free” to choose the level of spending they want. This freedom is relative, as people can be steered by tax incentives (instead of “government expenditure”, we speak of a “tax expenditure”, since it implies a shortfall in tax revenue for the State) or by necessity.

Total spending on health care and education is, for example, higher in the US than it is in France, relative to GDP, although the share directly distributed by the State is lower. How is it that expenditures deemed characteristic of a welfare State are higher in a more individualistic society? Are tax incentives and social norms being taken sufficiently into account? Another example: the introduction of the premium and the discount (surcote and décote) into the French pension system has changed individual incentives, and therefore individual returns (towards greater “actuarial neutrality”). But this did not affect the GDP share of “government expenditure” on pensions. In the future, the establishment of long-term care insurance may increase “government social expenditure” by a few GDP points. The right question is not the legal personality of the distributing entity, but rather, what are the incentives that individuals perceive, and what kind of inter- or intra-generational support will this long-term care insurance involve.

A social system must be judged on the rights it confers and the duties it entails, and thus on the extent to which it is more contributory or more solidarity-oriented and redistributive. To this end, we need to look at the benefits and the levies, as well as the implicit or explicit guarantees given in case of a shock to the private or public institutions that provide the benefits. A private system can be very redistributive (when the pricing of certain risks is prohibited, when there is a full State guarantee), and a public system can be very contributory and more neutral from an intergenerational perspective than a private system, as illustrated by Swedish pensions.

A simple review of the aggregate data is not enough to settle this debate, which is why the argument that cutting “government social expenditure” on the grounds that it is higher than in any other country simply makes no sense. 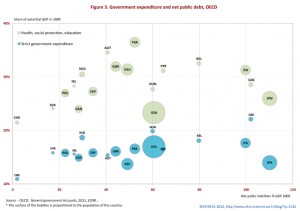