In the course of the crisis, most European countries reduced actual working time to a greater or lesser extent by making use of partial unemployment schemes, the reduction of overtime or the use of time savings accounts, but also through the expansion of part-time work (particularly in Italy and Spain), including involuntary part-time work. In contrast, the favourable trend in US unemployment is explained in part by a significant fall in the participation rate.

Assuming that, for a given level of employment, a one-point increase in the participation rate (also called the “activity rate”) leads to a rise in the unemployment rate, it is possible to measure the impact of these adjustments (working time and participation rates) on unemployment, by calculating an unemployment rate at a constant employment level and controlling for these adjustments. In all the countries studied, the active population (employed + unemployed) increased by more than the general population, except in the United States, which was due in part to pension reforms. Mechanically, without job creation, demographic growth results in increasing the unemployment rate of the countries in question. 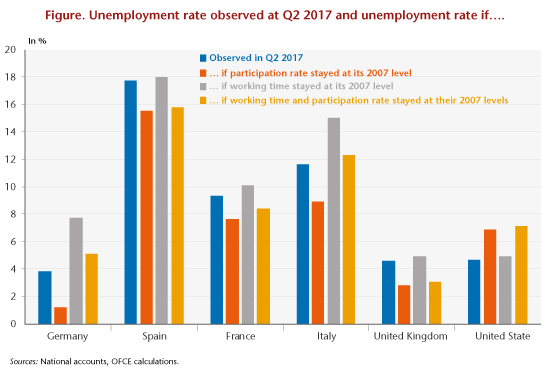 It should not be forgotten that there is a tendency for working time to fall, which is reflected in developments observed during the crisis independently of the specific measures taken to cushion the impact on employment through mechanisms such as short-time working or the use of time savings accounts. Since the end of the 1990s, working time has fallen substantially in all the countries studied. In Germany, between 1998 and 2008, it fell by an average of 0.6% per quarter. In France, the switch to the 35-hour work week resulted in a similar decline over the period. In Italy, the United Kingdom and the United States, average working hours fell each quarter by -0.3%, -0.4% and -0.3%, respectively. In total, between 1998 and 2008, working time declined by 6% in Germany and France, 4% in Italy, 3% in the United Kingdom and the United States and 2% in Spain, which was de facto the only country that during the crisis intensified the decline in working time begun in the late 1990s.