As the Governor of the Bank of France and the Minister of the Economy and Finance announced a further (probable) reduction in the interest rate on Livret A accounts for August 1st, the rating agency Standard&Poor’s (S&P) released a study of the French banking system. The U.S. agency argues that Livret A accounts, and regulated savings more generally, “penalize French banks” and are at the root of “distortions in the banking market”. This debate, which is hardly new, has been the subject of a number of reports: Duquesne, 2012; Camdessus, 2007; Noyer-Nasse, 2003, and more. Some ardently defend the peculiar French approach represented by Livret A, while others advocate, on the contrary, a deep-going reform of a system they describe as “lose-lose”.

So what’s the actual situation? Do Livret A accounts really threaten the French banking system? How are the household savings deposited in them used? What has been the impact of the series of increases in the ceilings on deposits? What will be the impact of the (probable) new rate cut proposed by the Minister of Economy and Finance, Pierre Moscovici, both for savers and for the financing of social housing? We provide a few answers below.

What are Livret A accounts?

Livret A accounts date from almost 195 years ago. They are a regulated investment that gives the right to a fiscal benefit (exemption from all taxation and social charges), with guaranteed deposits at a rate set by the State [1].

In 2011, the French savings rate was 16% on average, which was 1.1 points higher than in 2006. The increase in the savings rate went largely into regulated savings, and especially into Livret A accounts, which are held by 63.3 million French people, with total savings of 230 billion euros in April 2013, twice the level of January 2007. Three successive developments contributed to this massive increase in total holdings: the financial crisis, which redirected a portion of household savings into risk-free investments; the widespread distribution of Livret A passbooks to all banks after 1 January 2009, under the Act to modernize the economy [2]; and finally, the 50% increase in the ceiling on Livret A accounts, which took place in two stages (in October 2012 and January 2013). This growing attraction for Livret A is also due to the full liquidity of the accounts and the deposit guarantee – neither of which is available, for example, for life insurance.

What is the role of Livret A accounts?

One of (many) specific features of the French model for financing housing is (among others) that providers of social housing do not draw on the bond markets (Levasseur, 2011). Social landlords are therefore financed mainly (73% in 2012) by the Caisse des Depots et Consignations (CDC), where a portion of household’s Livret A savings are deposited. The CDC operates a savings fund that centralizes 65% of Livret A holdings, which in April represented more than 150 billion euros (Banque de France). The deposits made available are used primarily for lending for social housing and urban policy [3]. These borrowings are largely used for the construction, acquisition and rehabilitation of social rental housing by social landlords (HLM bailleurs), but they can also be used to finance specific housing operations and urban policy measures such as the National urban renovation plan (“NERP”). In order to secure the deposits and ensure the savings fund has the amounts needed, the amount of deposits centralized under Livret A funds must always be greater than or equal to 125% of the outstanding loans for social housing and urban policy granted by the CDC.

Finally, the Livret A resources that are not centralized by the CDC (80 billion euros) are subject to a “duty of use”. Eighty percent must be used by the banks for financing SMEs while 10% must be used to finance energy savings measures in existing buildings [5]. Similarly, a certain number of local government investment programmes (Campus Plan, 2012 Hospital plan, Grenelle Environment programme) have benefited from Livret A funds.

Are Livret A accounts endangering the French banking system?

Given the increasing interest of households in regulated savings (especially Livret A), one might think (like S&P) that this type of investment threatens the banking system by depleting bank liquidity, which has already been undermined by the crisis. The higher ceilings established ​​in recent months have indeed led – in essence – to a transfer of savings to tax-exempt investments, whose share in total household financial savings increased by 0.6 percentage point between 2011 and 2012. In October 2012, there was a significant drop in savings accounts subject to tax (‑12 billion euros), a drop that can be explained in part by the higher ceilings on Livret A accounts (+6 billion euros) [6] (see Figure 1). 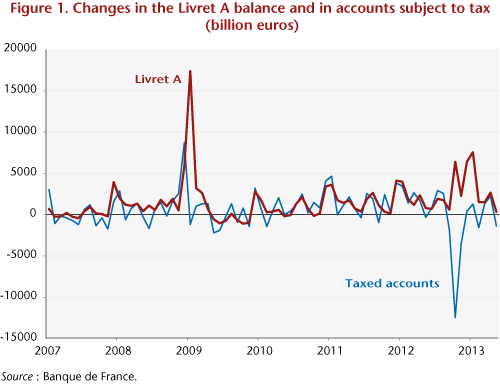 It is important to put S&P’s alarmist declarations into perspective – on the one hand, because, except for the month of October 2012, the flow from taxed accounts has been relatively stable, and on the other hand, because in 2012 regulated savings, although up significantly, accounted for only 9.5% (6.2% of which for Livret A) of total household financial savings, which amounted to 3,664 billion euros. In addition, if there were a real and lasting lack of liquidity, technical adjustments exist or can be made. According to the latest annual report of the Cour des comptes (French Court of Auditors), at the beginning of the year the coverage ratio of savings deposits was 156% of outstanding loans to social housing and urban policy, instead of the regulatory 125%. This over-coverage represents about 50 billion euros, which are allocated neither to the financing of social housing nor to bank liquidity. Now claimed by the banks, these funds are to be quickly allocated. As the savings fund has substantial liquidity, while leaving unchanged the ratios of coverage and of centralization (the fruit of bitter negotiations), it is clear that a number of temporary transfer mechanisms between the savings fund and the banking sector could quickly deal with any risk of a liquidity crisis. Finally, note that the banks have also benefited from the more widespread distribution of Livret A, notably through the payment by the savings fund of a commission on the amounts centralized. This commission, which is directly drawn on the funds for social housing, took 1 billion euros from the savings fund in 2012. Without drawing any conclusions about what should be done with these counterflows, it is questionable whether a better trade-off could be established between the centralisation rate and the coverage rate, the commission rate and the long-term funding of social housing [7].

What about the “probable” cut in the rates?

The reduction in Livret A rates, the proposal advanced on June 23 by the Minister of the Economy, Pierre Moscovici, who was echoing the statements made a few days earlier by the Governor of the Bank of France, Christian Noyer, should come into force on August 1, and is the result of a fall in the inflation rate on which it is partly indexed. What effect would this rate cut have on the flow of savings into Livret A accounts, and thus on the financing of social housing?

In May 2013, the interest rate on Livret A was 0.5% in real terms, a relatively low level. Over the period 2011-2012, it even came to an average of zero (see Figure 2). However, the net flow remained stable over the period. This is explained partly by the low rates offered by other investments, in particular taxed savings accounts such as the CEL home savings plan, which have had a negative real net rate since late 2009. Given the trade-offs made ​​by households, in particular the wealthiest ones, in their efforts to obtain the best return on their savings, it is relatively complex to demonstrate a strict correlation between the rate on Livret A accounts (real or nominal) and changes in the total outstandings. Thus, in the second half of 2009, Livret A suffered outflows even though the real rate on it was high; in 2010 and 2011, however, net deposits were high even though the rate was no longer so high.

Given, on the one hand, the lower real net rates offered by comparable investments and, secondly, current social and economic uncertainties, we can expect some stability in the flows during the second half of 2013, despite the decline in the rate of remuneration. This stability will obviously depend on the size of the rate reduction. As the rate is currently 1.75%, it seems unlikely that the high inflows will continue if the rate is revised below 1.25%. As France’s Economic commission expects inflation of 1.2% for 2013, fixing the Livret A rate below this would result in a fall in household purchasing power, which would go against the government’s commitments. 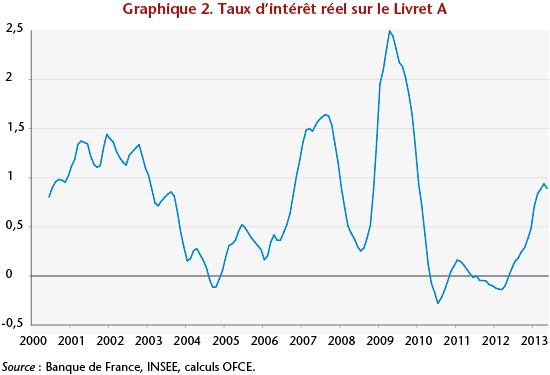 Nevertheless, it should not be forgotten that this re-valuation in the rate is not automatic and in fact depends on a political decision. In the second half of 2009, while the collapse of inflation would have justified a decrease of 1.5 points to reduce the rate to 0.25%, the rate reduction ultimately applied was only 0.5 point, leaving the rate at 1.25%. An additional 2 billion euros was thus distributed to households. Conversely, in February 2012, given the return of higher inflation (even temporarily), the rate should have been lifted to 2.75%. The savings shortfall for households due to not changing the rate is estimated at 1 billion euros.

As with households’ choice between safety, liquidity and yields, the public trade-off between household purchasing power and the lending terms for social landlords can prove to be complicated. So while undervaluing the rate significantly benefits beneficiaries of the allocation of funds from Livret A (mainly social landlords) whose loan rates are “indexed” on the Livret A rate, it is disadvantageous for the saver.

While “small” savers are not very sensitive to changes in interest rates, “big” investors, that is to say, those approaching the deposit ceiling, can make rapid trade-offs out of Livret A. However, these 10% of the depositors, with the largest accounts, represent 51% of Livret A deposits. A massive reduction in rates could therefore lead to a significant outflow and subsequently substantially reduce the CDC’s capacity to lend to the social housing sector, a sector with ambitious building targets and mounting financing needs. On the contrary, it seems clear that maintaining higher rates during a period of low inflation would push up the cost of lending to social housing, at a time when the State and the housing agencies have committed to the construction of 120 000 social housing units per year between 2013 and 2015.

[1] For greater detail on the method of determining the interest rates, see Péléraux (2012).

[2] In January 2009, the total balance experienced a historic increase of 12.5%. For comparison, the successive increases in the ceiling in last October and January resulted in increases of 3.1% and 3.5%.

[4] This objective corresponds to a campaign promise of the candidate Francois Hollande. It was recently downgraded: 120 000 housing financed per year until 2015 and 150,000 from 2016.

[5] For example, in 2012 Oséo and the FSI Strategic investment fund (Fonds stratégique d’investissement, FSI) received, respectively, 5.2 billion and 0.5 billion euros of resources from Livret A.

[6] The transfer was made ​​primarily to the LDD Sustainable development account (Livret de développement durable), whose outstandings grew by nearly 14 billion euros in October 2012 following the doubling of the ceiling.