The OECD has published an economic policy note, “Choosing fiscal consolidation compatible with growth and equity” [1]). There are two reasons why we find this note interesting. The OECD considers it important, as it is promoting it insistently; its chief economist has, for instance, come to present it to France’s Commissariat à la Stratégie et à la Prospective [Commission for Strategy and Forecasts]. The subject is compelling: can we really have a fiscal austerity policy that drives growth and reduces inequality? Recent experience suggests otherwise. The euro zone has been experiencing zero growth since it embarked on a path of austerity. An in-depth study by the IMF [2] argued that, “fiscal consolidations have had redistributive effects and increased inequality, by reducing the share of wages and by increasing long-term unemployment”. So is there some miracle austerity policy that avoids these two problems?

According to the authors of the OECD study, the goal of fiscal policy should be to bring the public debt down by 2060 to a “prudent” level, defined for simplicity’s sake, we are told, as 60% of GDP. All the OECD countries must work towards this objective and immediately make the necessary adjustments.

The OECD makes no effort to understand why a large majority of the organization’s members (20 out of 31, including all the large countries) have a public debt that is well over 60% of GDP (Table 1). Do we really think that all these countries are poorly managed? This high level of public debt is associated with very low interest rates, which in real terms are well below the growth potential. In 2012, for example, the United States took on debt, on average, of 1.8%, Japan 0.8%, Germany 1.5%, and France 2.5%. This level of debt cannot be considered to generate imbalances or be held responsible for excessively high interest rates that could undermine investment. On the contrary, the existing debt seems necessary for the macroeconomic equilibrium.

We can offer three non-exclusive explanations for the increase in public debts. Assume that, following the financialization of the economy, firms are demanding higher rates of profit, but at the same time they are investing less in the developed countries, preferring to distribute dividends or invest in emerging markets. Suppose that globalization is increasing income inequality [3] in favour of the rich, who save more, at the expense of the working classes who consume virtually all of their income. Suppose that, in many countries, aging populations are increasing their savings rate. In all three cases a demand deficit arises, which must be compensated by private or public debt. Yet since the crisis of 2007-2008 private agents have been deleveraging. It was therefore necessary to increase the public debt to prop up demand, as interest rates were already at the lowest possible level. In other words, it is not really possible to reduce public debt without tackling the reason why it’s growing, namely the deformation of the sharing of value in favour of capital, the increase in income inequality and unbridled financialization. 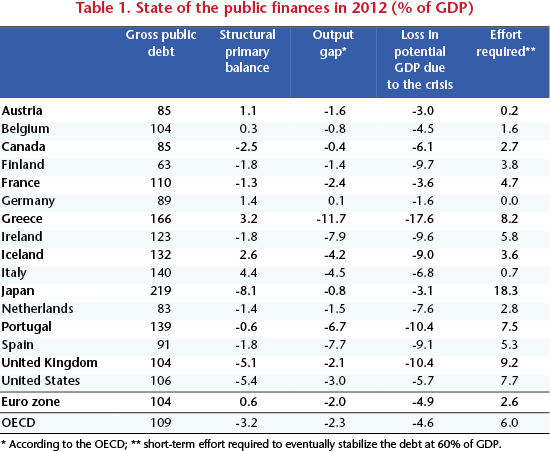 According to the OECD, gross public debt on the order of 100% of GDP, as at present, poses problems in terms of fragile public finances and a risk of financial instability. The economy could in fact be caught in a trap: households (given income inequality, aging or their justified mistrust of the financial markets) implicitly want to hold 100% of GDP in public debt (the only risk-free financial asset), interest rates are already near zero, and the financial markets are wary of a country whose debt exceeds 60% of GDP. We cannot escape this trap by reducing public deficits, as this reduces economic activity without lowering interest rates; what is needed is to reduce private savings and carry out a Japanese-style financial policy: the central bank guarantees the public debt, this debt is held by households, and the rate of compensation is low and controlled.

We only regret that the OECD has not made a serious analysis of the cause of the swelling public deficits.

Assume that long-term rates remain below the growth rate of the economy and that it is not necessary to reduce the public debt ratios. Then a structural primary balance at equilibrium would be sufficient to stabilize the public debt. Only two countries would need to make fiscal efforts: Japan (for 6.7 GDP points) and the US (for 2 points). The other countries would primarily be concerned with re-establishing a satisfactory level of production.

However, the OECD assumes that the countries will suffer forever from the shock induced by the crisis, that it is imperative to reduce the debts to 60% of GDP, that long-term rates will be higher (by about 2 points) than the economy’s growth rate in the very near future, and that public health spending will continue to rise. This leads it to conclude that most countries should immediately engage in a highly restrictive policy, representing 4.7 GDP points for France, 7.7 points for the United States, 9.2 points for the United Kingdom, etc.

The problem is that the OECD study assumes that these restrictive policies will not have any impact on the level of economic activity, or at least that the impact will be temporary, so that it can be neglected in a structural study of the long term. This is based on a notion that, though widespread, is wrong: that the economy has a long-term equilibrium that would not be affected by short or medium-term shocks. But this makes no sense. Real economies can go off in a different direction and experience periods of prolonged and cumulative depression. Is it possible to imagine a long-term Greek economy that is unaffected by the country’s current situation? The shock induced by the strategy advocated by the OECD would mean a lengthy period of stagnation in Europe , Japan and the United States; the depressive effect would not be offset by lower interest rates, which have already hit bottom; a fiscal cutback of 6% of the OECD’s GDP would result in a fall in GDP of 7.2% [4]; and the decrease in activity would be so great that debt ratios would rise in the short term (see the explanatory box below). To believe that the economy would eventually return to its long-term trajectory is just wishful thinking. The OECD provides no assessment of the impact of such a policy produced with a macroeconomic model.

We can only wonder that the OECD continues to advocate austerity policies that were shown in the years 2012-2013 to have adverse effects on growth and a negligible impact on the level of public debt, instead of advocating a policy stimulus that, while its content is of course debatable, would be more promising for the Western economies.

The bulk of the OECD study, however, is devoted to researching the policy instruments that would be most effective for achieving fiscal consolidation.

Based on previous work, the OECD assigns to each instrument an impact on growth, equity and the trade balance (Table 2). The organization has happily discovered that in some cases public expenditure can be helpful for growth as well as equity: such is the case of spending on education, health, family benefits and public investment. These should therefore be protected to the fullest. However, the OECD does not go so far as to imagine that they could be strengthened in some countries where they are particularly low today. In other cases, the OECD remains faithful to its free market doctrine: for example, it considers that spending on pensions is detrimental to long-term growth (since reducing it would encourage seniors to remain in employment, thereby increasing output) and is not favourable to equity. One could argue the opposite: that reducing public spending on pensions would hit the poorest workers, who would then live in poverty during their retirement; the better-off would save in the financial markets, which would strengthen these and thus fuel financial instability. Similarly, for the OECD unemployment and disability benefits hurt employment, and thus growth. Moreover, subsidies would be detrimental to long-term growth, as they undermine the competitive balance, and thus efficiency, but the OECD puts all subsidies in the same bag: the research tax credit, the PPE employment bonus, and the common agricultural policy, whereas a more detailed analysis is needed. Moreover, orthodox economic theory itself recognizes the legitimacy of public action when the market fails. The OECD has a negative view of social contributions, whereas it is legitimate for public PAYG systems to be funded in this way. The organization believes that income tax hurts long-term growth by discouraging people from working: but this is not what we find in Scandinavia.

Finally, the ranking produced (Table 2) is only partly satisfactory. The OECD warns against lowering certain public spending (health, education, investment, family) and occasionally advocates higher taxes on capital, corporation tax and income tax, and environmental taxes. But at the same time it advocates cutting back on pensions and unemployment insurance and reducing subsidies.

The OECD seeks to take into account the heterogeneity of national preferences. But it does so in a curious way. It considers that countries where income inequality is high (the United States and United Kingdom) should be more concerned with equity, but that the opposite holds for egalitarian countries (Sweden, Netherlands). But the opposite position could easily be supported. Countries that have highly egalitarian systems want to keep them and continue to take account of equity in any reforms they undertake.

Ultimately, suppose that, like France, all the countries had set up an efficient system for the control of their public finances (the RGPP then the MAP). At equilibrium, all expenses and revenues have the same marginal utility. If there is a need to save money, this should involve a reduction in costs and an increase in revenue in the same proportions. Dispensing with this strategy would require a detailed analysis of the utility of the spending and the cost of the revenue, an analysis that the OECD is incapable of providing. The fact that the OECD considers that spending on disability is generally detrimental to growth does not give it the right to advocate a strong reduction in disability spending in Finland, without taking into account the specific features of the Finnish system 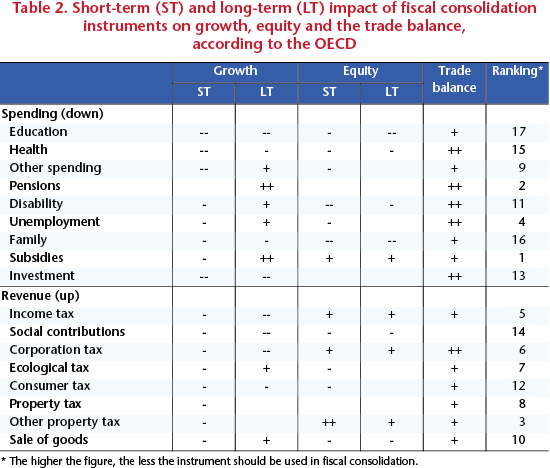 All things considered, the recommendations for France (Table 3) are of little use, whether this is a matter of greatly reducing the level of pensions and unemployment benefits (under the pretext that France is more generous than the average of the OECD countries!) or of reducing subsidies (but why?) or of reducing public consumption (because France needs an army, given its specific role in the world).

Overall, the OECD does not provide any simulation of the impact of the recommended measures on growth or equity. It is of course possible to do worse, but this still winds up in a project that would lead to a sharp decline in growth in the short to medium term and a decrease in spending on social welfare. Even though it claims to take account of the trade balance, it does not argue that countries running a surplus should pursue a stimulus policy in order to offset the depressive impact of the restrictive policies of countries running a deficit.

But the OECD also holds that there are of course miracle structural reforms that would improve the public deficit without any cost to growth or equity, such as reducing public spending without affecting the level of household services by means of efficiency gains in education, health, etc.

What a pity that the OECD is lacking in ambition, and that it does not present a really consistent programme for all the member countries with an objective of growth and full employment (to reduce the unemployment caused by the financial crisis) and of reducing trade imbalances, especially a programme with social objectives (reducing inequality, universal health insurance, and a satisfactory level of social welfare)!

[4] Using the multiplier of 1.2 from the OECD Note, 2009, “The Effectiveness and the Scope of Fiscal Stimulus”, March.