Rent control: What is the expected impact?

The decree on rent control, which was published in the Journal officiel on 21 July, takes effect on 1 August 2012 for one year. The measure was announced in January 2012 during François Hollande’s presidential campaign. It has now been adopted, while awaiting the major reform of landlord-tenant rental relations that is scheduled for 2013.

Difficulties in finding housing and deteriorating living conditions for an increasing share of the population point to growing inequality in housing. This inequality is undermining social cohesion, which is already being hit by the economic crisis. For many people, homeownership is becoming a problematic proposition due to the rising cost of buying, while applications for the allocation of social housing remain on hold for lack of space, and the private rental market is becoming increasingly expensive in large cities because of the soaring price of property. Rent control in these cities is serving as an emergency measure to slow the price increases. This poses a challenge of keeping investors in the private rental market, which is already characterized by a shortage in housing supply and very low rental returns (1.3% in Paris after capital depreciation).

The decree aims to significantly lower market rents [2], which are being driven up by rents at the time of re-letting, i.e. during a change of tenant. Unlike rent during the lease period or upon renewal of a lease, which are indexed to the IRL rental benchmark, until 31 July 2012 rents for new tenants were set freely. In 2010, this applied to nearly 50% of re-lettings in the Paris area (60% in Paris). Now, in the absence of major renovations, these will be subject to control. Only rents for new housing that is being let for the first time or renovated properties (where the renovation represents more than one year’s rent) will remain uncontrolled (Table 1). 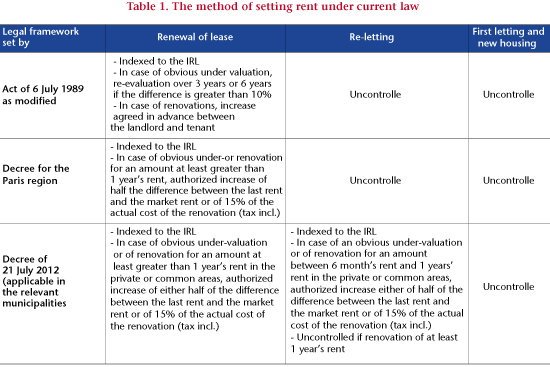 By using the data from the Observatoire des Loyers de l’Agglomération Parisienne, along with the hypotheses set out in the OFCE Note (no. 23 of 26 July 2012), “Rent control: what is the expected impact?”, we evaluated the impact this decree would have had if it had been implemented on 1 January 2007 and made permanent until 2010. According to our calculations, this decree would have resulted not only in sharply slowing increases in rents for re-lettings during the first year it was applied (+1.3% in the Paris area, against 6.4% observed), but also in stabilizing or even reducing rents at the time of the next re-letting, i.e. in our example, three years later (in 2010, 0% in Paris and -0.6% in the Paris region). Finally, in 2010, rents would have been 12.4% lower in Paris and 10.7% lower in the Paris region than they would have been in the absence of the measure. This means that in Paris, rents would have been about €20.1 per sq.m instead of the rate of €22.6 per sq.m actually observed (Table 2). For an average size dwelling (46 sq.m) re-let in Paris, the monthly rent would thus have been €924 instead of €1,039, a savings for the tenant of €115 per month. For the Paris region as a whole, using the same assumptions, the rent upon re-letting would have fallen on average to €15.9 per sq.m, instead of the actual €17.8 per sq.m. For an average rental area upon re-letting of ​​50 sq.m, the gain would be €95 per month!

Over the longer term, the decree would make it possible to reduce the gap between sitting tenants in place for more than 10 years and new tenants (a gap of 30% in 2010 in the Paris region and 38% in Paris itself), and to improve market fluidity.

Currently, what possibility is there of moving if the mere fact that a couple has children increases the price per sq.m by over 15% in the Paris region? Similarly, the financial incentive to move for a couple living in a four-room 80 sq.m dwelling whose children have left home is zero, because the rent for a 60 sq.m unit with 3 rooms would cost just as much. This premium on being sedentary increases the pressure on the rental market and encourages households to stay in properties that are not suited to their needs, and even hampers labour market mobility.

Can this measure encourage mobility and restore household purchasing power? In the short term, it will certainly benefit the most mobile households by limiting the increase in the share of their budget spent on housing [3]. But these are the households facing the least constraints on income, that is to say, those with high incomes or a relatively low share of income spent on housing. It will also benefit households that are forced to move or those who are running up against the limits on their finances. For all these households, the increase in the share of income on housing will be lower than it would have been without the decree. In contrast, for low-income households whose share is already high [4], the decree won’t change anything, because they can ill afford the additional cost of re-letting.

What are the risks?

While there are real benefits to be expected, these would still need to be made viable by the application of this decree, or at least by the next Act. Besides the difficulty of implementing the decree (absence both of reliable mechanisms to monitor rents in the areas concerned and of a legal framework to allow tenants to assert their new rights), the impact of this measure will be positive for tenants only if the rental supply does not shrink (by maintaining current investors in the market and continued new investment) and if landlords do not seek to offset future rent control by raising the rent at the time of the first let.

Likewise, the realization of improvements in line with the Grenelle 2 environmental consultation or simply maintenance work could wind up being abandoned due to the lengthening of the amortization period for landlords compared with the previous situation. Conversely, some owners might be encouraged to carry out major renovations (in excess of one year’s rent) and “to upgrade the dwelling” in order to be able to freely determine the rent. This would give the landlord a margin of safety to offset any subsequent shortfall. These increases, if they occurred, would penalize less creditworthy tenants and would promote the process of gentrification already at work in the areas under greatest pressure. We could then see increasing differences between the market for “rundown housing” and that for renovated housing.

This decree should in the short term limit the extent of disparities in the areas under greatest pressure, at no cost to the government. But it will not solve the problem for the poorest households of the share of income going to housing: to do this, it is necessary to increase the stock of social housing, to improve its fluidity and to significantly upgrade housing subsidies [5], which would require a major financial effort. The fundamental problem remains the lack of supply, particularly in urban areas, where by definition the available land is scarce and expensive, with higher rents simply passing on the price of property. However, to ease housing prices, more land needs to be available, with a greater density where possible, transport needs to be developed to facilitate the greater distance travelled between residential areas and workplaces, and so on. These are the levers that need to be used if we are to improve the housing conditions of less well-off households.

[1] The decree applies in municipalities where the rent increases seen over the period 2002-2010 were more than double the increase in the IRL benchmark (i.e. 3.2% per year) and the market rent per sq.m exceeds the national average outside the Paris region (€11.1 /sq.m) by 5%. This includes nearly 1,400 communes in 38 cities (27 in metropolitan France and 11 in overseas departments).

[3] This share has increased for 15 years for households in the private rental sector, and particularly the less well-off.

[5] According to the IGAS report “Evaluation of personal housing assistance”, in 2010, 86.3% of rents in the private rental sector were greater than the maximum rent taken into account for calculating housing benefit. Any increase in rent is thus borne entirely by the tenant.