The “Ricardian effect”: to be taken with caution!

Is the deterioration in the public finances influencing households’ consumption behaviour? A recent INSEE study tries to answer this with an econometric estimate of the determinants of the savings rates using yearly data from 1971 to 2011. Based on the results of the study, the authors attribute recent changes in the French households’ rate of consumption to fiscal policy and the state of the public finances. Their model thus concludes that there is a significant “Ricardian” effect: having noted the worsening state of the public finances during the crisis, households are anticipating future tax hikes, leading them to up their savings during the recent period. Note that this effect is only temporary: the results of the INSEE’s econometrics indicate that while this has reined in consumer spending in the short term, the effect will fade quickly and disappear in the long term. Households are therefore “Ricardian” … but only in the short term!

This oxymoron may be due to the fact that the standard determinants of consumption, i.e. inflation, interest rates and the unemployment rate, do not have any effect over the period studied by the INSEE. Hence for the INSEE, French households are forming rational short-term expectations, but without building up any “precautionary savings” against the risks associated with a deterioration in the labour market. However, in a recession, since a deterioration in the public finances goes hand in hand with a consequent rise in unemployment, the “Ricardian effect” and “precautionary savings” are in competition, making it difficult to distinguish them (Figure 1). 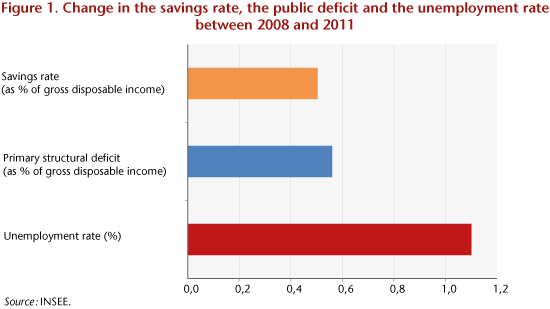 It should be noted in this regard that the stability of the parameters estimated by the INSEE is not guaranteed over the period 1970-2011: the non-significance of the unemployment rate is resolved once the estimation period begins later, after 1975, and this variable becomes highly significant from 1978. This is why we have reproduced the INSEE’s analysis by starting the estimate in 1978. The results from modelling the rate of household consumption using an error correction model (ECM), based on three different specifications presented in Table 1, can be summarized as follows: 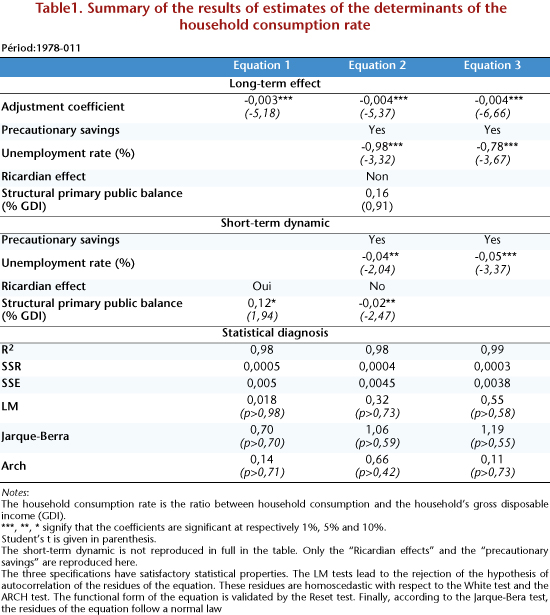 This result also confirms the analysis made in other OFCE studies concerning the importance of the multipliers during economic downturns.