Rotation of voting on the ECB Governing Council: more than symbolic?

Lithuania’s adoption of the euro on 1 January brought the number of euro zone members to nineteen, the threshold at which the voting system in the European Central Bank (ECB) Governing Council has to be changed. While this change took place almost unnoticed in France, things were different in Germany and Ireland, where the introduction of the system of rotation in the voting that decides the euro zone’s monetary policy has raised concern and even opposition. Is this reaction justified? Here we propose some food for thought and reflection.

1) How will the system of rotation function?

Until now, at the monthly meetings of the ECB Governing Council that decides monetary policy (policy rates, unconventional policies) in the euro zone, the principle “one country, one vote” applied. In other words, each country had, through the Governor of its central bank, a systematic right to vote. To the votes of the 18 Governors were added the votes of the six members of the ECB Executive Board, for a total of 24 votes.

From now on, with the entry of a 19th member into the euro zone, the countries are classified into two groups, in accordance with the Treaty[1]. The first group consists of the 5 “largest” countries, as defined by the size of GDP and the financial sector, with respective weights in the criterion of 5/6 and 1/6. The second group consists of the other countries, currently numbering 14 [2]. Each month the group of five “big” countries has 4 votes and the Group of 14 “small” countries 11 votes (Table 1). The voting within the two groups is organized according to a principle of rotation defined by a precise schedule: the Governor of each “big” country will not vote one time out of every five, while the Governor of each “small” country will not vote 3 times out of 14. However, the 6 members of the ECB Executive Board will continue to benefit from a systematic monthly right to vote. So every month, the conduct of the euro zone’s monetary policy will be decided by 21 votes, while under the old principle, that of “one country, one vote”, 25 votes were cast. 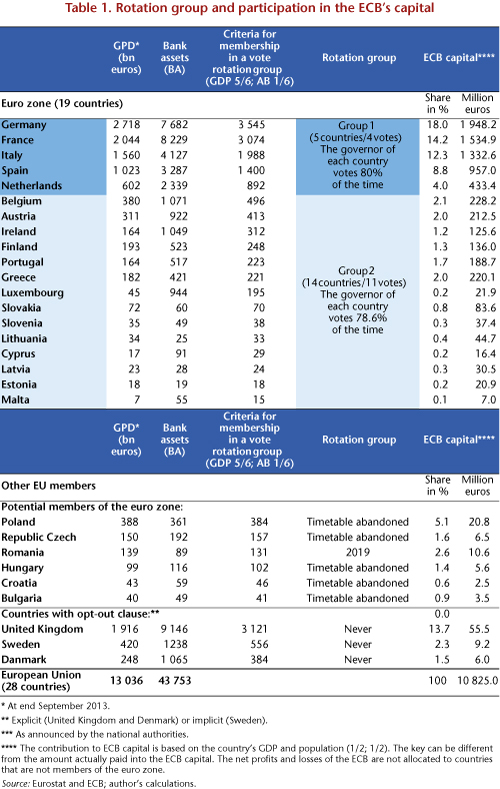 Why change the system of voting rights? The objective is clear and justified: it is to maintain the decision-making capacity of the Governing Council as the number of countries joining the euro zone increases.

The arguments of German opponents of the new system, beyond just a loss of prestige, are that the largest economy in the euro zone and also the largest contributor to the ECB’s capital (Table 1) must necessarily take part in the votes deciding the zone’s monetary policy. To ensure that Germany’s interests are not neglected, when Germany doesn’t vote its Governor should have a veto. This veto would also be justified by the principle that you should be responsible only for your own decisions.

In Ireland, according to the opponents of the new system, the myth of equality between the countries of the euro zone is finished: the introduction of a rotation system that favours the big countries is formalizing the lack of equality between the zone’s countries. Ireland has thus been explicitly relegated to being a second tier country. Furthermore, Ireland’s influence in the decision-making process will be reduced even further as the euro zone continues to expand.

The introduction of the rotation system doesn’t seem to have aroused as much resentment from politicians or civil society in other countries in the euro zone.

3) Do the German and Irish arguments make sense?

As is well known, Germany has a culture of stability all its own, in particular due to its history a strong aversion to inflation. In contrast, the countries of southern European are reputed to have a much less marked aversion to the “inflation tax”. It is this difference in the degree of “acceptable” inflation that has led to modelling the statutes of the ECB more or less on those of the Bundesbank, which was considered the only way of securing Germany’s participation in the euro zone. Today, however, the issue of inflation is no longer posed since the euro zone is entering into deflation, a situation that some think could last for years[3].

Today, it is much more the methods the ECB is using to conduct monetary policy that are being questioned in Germany by some of the country’s politicians, economists and citizens. The arguments being made by opponents of the rotation system, based on contributions to the ECB‘s capital and more generally being Europe’s leading economic power, echo the policies that have been pursued in recent years by the ECB (e.g. easing eligibility criteria for securities deposited as collateral at the ECB, purchase of securitized assets) but also the future policy of purchasing sovereign bonds. These policies have raised fears in Germany that the ECB balance sheet will contain too much “toxic” debt that sooner or later could be dropped, with the cost of this being borne by the Bank’s principal funder.

Is it really believable that Germany’s interests wouldn’t be taken into account?

There are three arguments for answering “no”. First, even when the German Governor doesn’t vote, Germany will still have a “representative” on the Executive Board (currently Sabine Lautenschläger)[4]. In theory, of course, the members must consider the interests of the euro zone when they vote and not just the interests of their own country, but the reality is more complex[5]. Furthermore, the Governors, even when they do not vote, still have a right to speak, and therefore some power of persuasion. Finally, more generally, the desire for a consensus  will make it necessary to take into consideration the opinion of the Governors who are not voting.

How justifiable are the arguments of the Irish opponents of the rotation system? It is clear that the counter-arguments developed above (concerning the right to speak and the need for a consensus) that apply to the Germans also apply to the Irish.

However, it is true that Ireland, like all the countries in Group 2, will see its voting rights further diluted as the euro zone expands. When the euro zone is comprised of 20 members, the 15 Group 2 countries will have to share 11 votes (Table 2, source: p. 91). When the euro zone expands again to 21 members, 16 Group 2 countries will still have to share 11 votes … At 22 members, the creation of a third group will result in further dilution of the voting rights of groups 2 and 3, but not of group 1, the group of “large” countries, which will still continue to vote 80% of the time.

The question that is posed for Ireland but also for all the countries currently in Group 2 concerns the future expansion of the euro zone. To date, all the countries of Central and Eastern Europe (CEE) that have not yet adopted the euro have abandoned a timetable for joining the euro zone (Table 1). The only exception is Romania, which has proposed 2019 for joining[6]. Though the prospects of the other countries have not been abandoned, they nevertheless appear very distant[7]. The likelihood that the euro zone will soon include 21 members is rather low, and the probability of exceeding 22 members even lower. Anyway, whatever the configuration, Ireland will never be part of group 3. It is thus the countries that are lagging in today’s group 2 (Malta, Estonia, Latvia, etc.) that have the most to lose in terms of the frequency of voting. 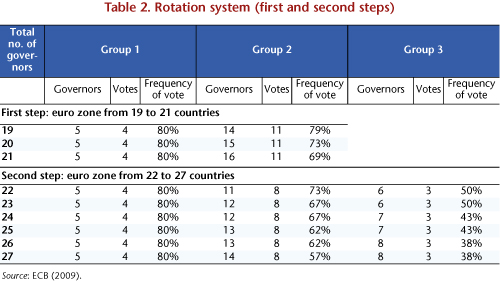 There can be no talk of a unified Europe while explaining that there are several categories of countries. How can there be congratulations for the euro zone gaining new members while at the same time explaining that only certain members can or should participate in its decision-making. In a unified Europe it is not acceptable for there to be a vote in the Council that is systematic only for certain Governors (but not all) or a right of veto that only a few Governors can exercise. Each country loses its monetary sovereignty by joining the euro zone: why should some countries lose more than others?  But is it really desirable to go back to the old system of “one country, one vote”? No. The new voting system in the Governing Council is a good compromise between the need to maintain the Council’s decision-making capacity (and therefore have a reduced number of voters) and the need to allow each Governor to vote on a regular basis. From this point of view, the rotation system used in the euro zone is more balanced than that used in the United States, where some members may not vote for one, two or even three years[8]. In the euro zone, the length of time that a Governor does not vote on monetary policy will not exceed one month for Group 1 countries, and for countries currently in Group 2, it shall not exceed three months (so long as the euro zone consists of just 19 countries).

At least in theory. Because, in practice, while the Governing Council will continue to meet twice a month, the vote on the conduct of monetary policy will now take place  only every six weeks … (previously every four). The voting abstention time will thus be (slightly) longer than what is stated in the official documents of the ECB and the euro zone’s national central banks…

[1] More specifically, on 21 March 2003 the European Council amended Article 10.2 of the statutes of the Eurosystem in order to allow the establishment of a system of rotation in the ECB Governing Council. The amended article provided that the rotation system could be introduced from the entry of the 16th member into the euro zone and at the latest upon the entry of the 19th member.

[2] The Treaty provides for the creation of a third group upon the entry of a 22nd country.

[5] The experience of the US Federal Open Market Committee shows that there is a regional bias in the way the Governors vote (Meade and Sheets, 2005: “Regional Influences on FOMC Voting Patterns”, Journal of Money Credit and Banking, 33, pp. 661-678).

[6] It will in any case have to respect the Maastricht criteria (criteria on the public deficit, interest rates, inflation, etc.).

[7] This shift is due in part to the fact that many of the Central and East European countries have benefited from the depreciation of their currencies against the euro. They have thus understood that joining the euro zone would not just bring them benefits. In addition, it is assumed here that the United Kingdom, Denmark and Sweden will never join the euro zone because of their opt-out clause.

1 thought on “Rotation of voting on the ECB Governing Council: more than symbolic?”