Still no halt to the rise in unemployment

The unemployment data for the month of May once again show a rise in the number of job seekers registering at the Pôle Emploi job centre in Class A, up 16,200. Although this is certainly fewer than in April (26,200), it still leaves no glimpse on the horizon of a reversal in the unemployment curve. This continuous increase in unemployment, despite some initial shoots of recovery, is not surprising. The renewed GDP growth in the first quarter (+0.6% according to the detailed accounts published by the INSEE Thursday morning) has yet to have an impact on employment, which has stagnated. For the moment, companies are taking advantage of the pick-up in activity to absorb the excess labour they inherited from the crisis (in English see the post introducing this study). Only once the recovery has proved to be sustainable will an increase in employment translate into a reduction in unemployment. The time it takes employment to adjust to economic activity, i.e. about three quarters, does not point towards a turnaround in the labour market in the short term.

The last period of growth in France just following the 2008-2009 recession was moreover too brief to lead to a decline in the number of job seekers. With average growth of 0.7% per quarter from Q4 2009 to Q1 2011, the number of unemployed stabilized at best (Figure 1).

Since Q2 2011, growth has fallen to a very low level (0.1% per quarter), and unemployment has started rising again. However, a shift occurred in early 2013, with the monthly increase halved on average thanks to a renewal of the social treatment of unemployment through the creation of about 100,000 subsidized jobs in non-market sectors, as well as through enriching the growth in employment due to the implementation of the CICE tax credit and the Responsibility Pact. 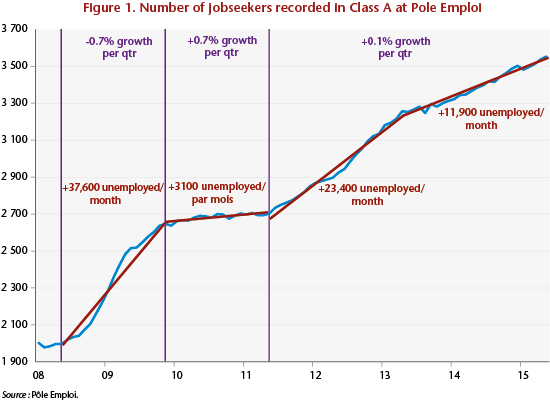 As growth gradually accelerates and the various measures to boost employment begin to kick in, a (slow) improvement will be seen in the second half of 2015.

The spectacular decline in exits from the Pôle Emploi agency

The 69,600 increase in the number of jobless registered with Pôle Emploi in Class A, B and C in the month of May, which is the worst figure recorded since the depths of the recession in April 2009, is surprising. The number of the unemployed broadly speaking, i.e. including unemployed people but also those working reduced hours, has been affected by unusual changes in the numbers of those exiting the job centre. About 43% of exits from the job centre are attributable to a termination of enrolment due to the non-renewal of the monthly job application for unspecified reasons, but which may be related for example to a resumption of activity, discouragement, temporary unavailability or even simply an oversight.

On average over the last five years, every month there were 200,000 terminations of enrolment due to this failure to renew. Some months, the grounds for termination can vary sharply, temporarily throwing off the unemployment statistics. For example, in August 2013, the “SFR bug” (Figure 2), i.e. a computer failure at the mobile phone operator, prevented many jobseekers from updating their status, which resulted in a sharp rise in the terminations of enrolment (+260,100). Due to the effect of a very high flow of exits from Pôle Emploi, the number of job seekers in Classes A, B and C fell by 43,800 in August 2013. The following month, as the number of terminations of enrolment returned to a level that was close to its long-term average, the unemployment figures logically rose sharply (+56,400 in September 2013), correcting for the effect of the artificial fall in the previous month.

In terms of the figures for May 2015, the phenomenon was the opposite of what happened during the SFR bug in August 2013. In fact, having noticed that the number of job seekers who updated their status following the normal reminder was significantly lower than usual, Pôle Emploi issued two additional reminders, which led to an unusually low level of terminations of enrolment (+160,600) compared with the historical trend (201,300). This mechanically increased the numbers in class A, B and C, at a rate that Pôle Emploi calculates at between 28,000 and 38,000.

But if next month the number of terminations of enrolment returns to a level close to its long-term average, this would wind up lowering the number of job seekers in class A, B and C without this reduction being the result of any change in the labour market. We must therefore insist on the need for caution in making any month-by-month interpretation of the unemployment data. 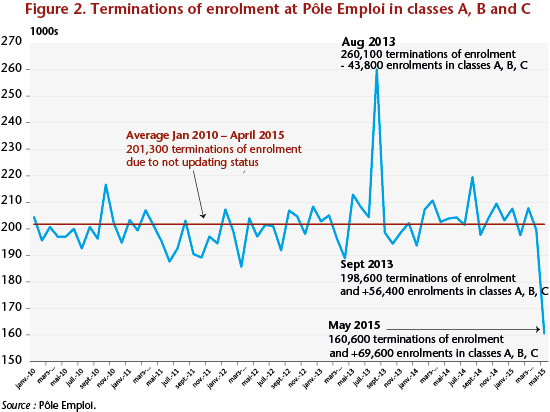