The luxury industry has been spared the spreading crisis, which in the media’s eyes seems to be posing a paradox. This situation in fact corroborates the diagnosis that rising inequality is the true breeding ground of the crisis.

These results contrast sharply with the situation in other industries. They are the result of a rise in prices that is nothing less than staggering. The price index for luxury goods as calculated since 1976 (the “Forbes Cost of Living Extremely Well”) rose 800% in 35 years, compared with 300% for the price index for consumer goods. 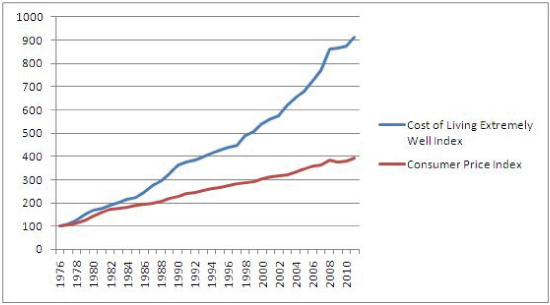 In an article on the subject (“The more expensive the product, the more desirable”, 8 August 2012), Le Monde reported that the price of a Burberry gabardine raincoat has multiplied by 5.6 and that the price of a Rolex YachtMaster has rocketed from 5,488 to 39,100 euros. These soaring prices simply reflect the great and growing willingness to pay of the richest strata, for whom price is simply a mark of differentiation and desirability.

In these circumstances, the stock market success of companies in the luxury industry is hardly surprising. Nor is it surprising to see the stock market success of companies at the other end of the spectrum, those that produce low-end, cheap goods. This effect, called the hourglass effect, is starkly revealing of the reality of the crisis, which is clearly rooted in widening inequalities in income and wealth.

The healthy state of luxury firms, which are creating jobs at a time of rising unemployment, is obviously a source for rejoicing. But if we simply left things at this remark about the sector, we would be missing the essential point. First, it must be recognized that the industries in question are responding to higher demand much more by raising prices, and not the quantities produced, for the simple reason that the number of wealthy people, even if growing significantly with the arrival of the nouveaux riches in China and elsewhere, is still limited. We are a long way from the fundamental mechanism driving growth, whereby gains in productivity push prices down and have an impact on income that is substantial enough to stimulate demand on an ever increasing scale. We also have to recognize the other side of the coin of this genuine increase in inequality, namely, the fall in median income and the corresponding weakening of the large middle class, whose demand for midrange products and services was a foundation for growth.

It is also worth noting recent trends in the luxury industry, which has successfully striven to produce brands that are lower cost versions of goods that were previously reserved for the rich. As shown by some studies, the diversification of the luxury industry is being accompanied by a sociological change indicating that middle-class households are developing a greater preference for these types of goods (see J. Hoffmann and I. Coste-Manière, 2012 Luxury Strategy in Action, Palgrave Macmillan). This might be a long-term development if it is remembered that preferences are not homothetic, in other words, that lower incomes are not leading back to the map of preferences as it existed previously (before incomes had increased). Many households are trying to maintain the kind of consumption that they have become accustomed to, ultimately at the cost of higher indebtedness, if by chance that is permitted by the financial system. However, the business segment preserved in this way may prove to be fragile, and the performance of the luxury industry could continue to be driven by the conspicuous consumption of genuine luxury products. It is not surprising, then, to observe that, with the continuation of the crisis and its consequent impact on the consumption of the middle class, a company like PPR is planning to hive off certain brands, notably FNAC, in order to focus on the luxury segment.

There is nothing paradoxical about the insolent health of the luxury industry. It goes hand in hand with the heightening difficulties facing industries and companies whose products and services are intended for those on middle-incomes. The constantly increasing divergence in performance between industries and firms depending on their positioning range is merely another sign of a deepening crisis.