The irresistible attraction to recession

Here is the leading indicator for the French economy, updated to 30 January 2011.

The February forecasts of the leading indicator significantly worsened the outlook for the French economy at the turn of 2011 and 2012.

On the one hand, GDP is expected to have fallen more than expected in the fourth quarter of 2011, by -0.3% instead of the -0.2% estimated last month. On the other hand, the pick-up in growth in the first quarter of 2012 observed in January is fast disappearing, with GDP rising by 0.1% and not 0.3% as in the previous estimates. In total, GDP will contract by 0.2% over the two quarters. The uncertainty hanging over a forecast of GDP over two quarters, which we have pointed out earlier, is gradually being lifted in an unfavourable sense as the negative information builds up. In particular, the climate in industry continued to worsen in January at a higher rate than expected last month.

The deteriorating business environment is taking precedence over the more positive elements that up to now blunted the impact of the sovereign debt crisis on growth, namely, the decline in the euro against the dollar in the third quarter of 2011 and the interruption of the dive by the CAC40 stock market index in the fourth quarter. If this same dynamic repeats in February and March, France would be unlikely to escape a recession in the usually accepted meaning of the term, i.e. the occurrence of two consecutive quarters of falling GDP. 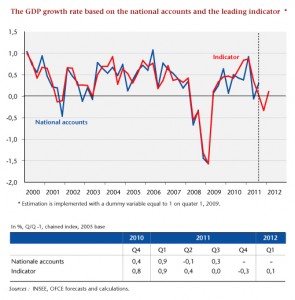