The tax credit to encourage competitiveness and jobs – what impact?

Following the submission to the Prime Minister of the Gallois Report on the pact for encouraging the competitiveness of French industry, the government decided to establish the tax credit to encourage competitiveness and jobs (“the CICE”). Based on the rising trade deficit observed over the course of the last decade, the sharp deterioration in business margins since the onset of the crisis and growing unemployment, the government intends to use the CICE to restore the competitiveness of French business and to boost employment. According to our assessment, which was drawn up using the e-mod.fr model as described in an article in the Revue de l’OFCE (issue 126-2012), within five years the CICE should help to create about 150,000 jobs, bringing the unemployment rate down by 0.6 point and generating additional growth of 0.1 GDP point by 2018.

The CICE, which is open to all companies that are assessed on their actual earnings and are subject to corporation tax or income tax, will amount to 6% of the total wage bill for wages below 2.5 times the minimum wage (SMIC), excluding employer contributions. It will come into force gradually, with a rate of 4% in 2013. The CICE’s impact on corporate cash flow will be felt with a lag of one year from the base year, meaning that the CICE will give rise to a tax credit on corporate profits from 2014. On the other hand, some companies could benefit in 2013 from an advance on the CICE expected for 2014. The CICE should represent about 10 billion euros for the 2013 fiscal year, 15 billion in 2014 and 20 billion from 2015. As for the financing of the CICE, half will come from additional savings on public spending (10 billion), the details of which have not been spelled out, and half from tax revenue, i.e. an increase in the standard and intermediate VAT rate from 1 January 2014 (6.4 billion) and stronger environmental taxation.

This reform is similar in part to a fiscal devaluation and in some respects bears similarities to the mechanisms of the “quasi-social VAT” (see Heyer, Plane, Timbeau [2012], “Economic impact of the quasi-social VAT” [in French]) that was set up by the Fillon government but eliminated with the change of the parliamentary majority as part of the second supplementary budget bill in July 2012.

According to our calculations using 2010 DADS data, the CICE would lower average labour costs by 2.6% in the market sector. The sectors where labour costs would be most affected by the measure are construction (-3.0%), industry (-2.8%) and market services (-2.4%). The ultimate sectoral impact of the measure depends both on the reduction in labour costs and on the weight of wages in value added in a given sector. Overall, the CICE would represent 1.8% of the value added of industrial enterprises, 1.9% of the value added in construction and 1.3% in market services. In total, the CICE would represent 1.4% of the value added in market sector companies. According to our calculations, the total value of the CICE would be 20 billion euros: 4.4 billion in industry, 2.2 billion in construction and 13.4 billion for market services. Industry would therefore recover 22% of the total spending, i.e. more than its share of value added, which is only 17%. While this measure is intended to revive French industry, this sector would nevertheless not be the primary beneficiary of the measure in absolute value, but, along with the construction sector, has the best exposure relatively speaking due to its wage structure. Furthermore, industry can benefit from knock-on effects related to reductions in the prices of inputs generated by the lowering of production costs in other sectors.

The expected effects of the CICE on growth and employment differ in the short and long term (see graphic). By giving rights in 2014 based on the 2013 fiscal year, the CICE will have positive effects in 2013, especially as the tax hikes and public spending cuts will not take effect until 2014. The result will be a positive impact on growth in 2013 (0.2%), although it will take longer to affect employment (+23,000 in 2013) due to the time it takes employment to adjust to activity and the gradual ramping-up of the measure.

On the other hand, the impact of the CICE will be slightly recessive from 2014 to 2016, as the loss in household purchasing power linked to higher taxes and the cuts in public spending (household consumption and public demand will contribute -0.2 GDP point in 2014 and then -0.4 point in 2015 and 2016) will prevail over lower prices and the recovery of business margins. Apart from the first year, the CICE’s positive impact on growth related to income transfers will be slow to be seen, as gains in market share related to lower prices and to higher business margins are dependent on a medium / long-term supply-side mechanism, with demand-side impacts being felt more rapidly.

The implementation of the CICE will gradually generate gains in market share that will make a positive contribution to activity by improving the foreign trade balance (0.4 GDP point in 2015 and 2016), whether through increased exports or reduced imports. From 2017, the external balance will not contribute as much to the economy (0.3 GDP point) due to the improved purchasing power of households, resulting in slowing the reduction in imports. Despite the higher margins and the improved profitability of capital, productive investment will fall off slightly due to the substitution effect between labour and capital and the negative accelerator effect related to the fall in demand.

With the decline in the cost of labour relative to the cost of capital, the substitution of labour for capital will gradually boost employment to the detriment of investment, which will lead to job-rich GDP improvements and to lower gains in productivity. This dynamic will result in steady gains in employment despite the slight fall-off in activity between 2014 and 2016. Due to the rise in employment and the fall in unemployment, but also to possible wage compensation measures in companies arising from the greater fiscal pressure on households, wages will regain part of their lost purchasing power based on an increase in real pay. This catch-up in purchasing power will help to generate growth, but will limit the impact on employment and productivity gains. 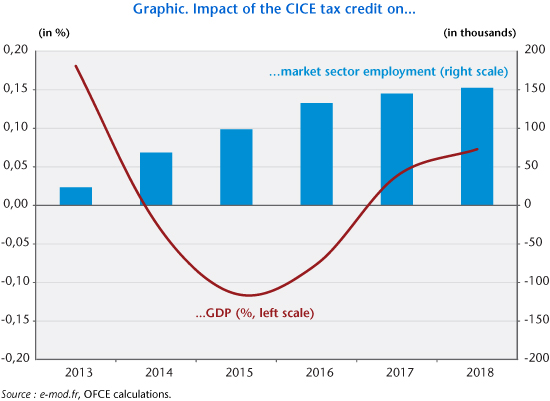