The Treaty of Rome and equality

The Treaty of Rome: Article 119, Title VIII, “Social Policy, Education, Vocational Training, and Youth”, Chapter 1: Social Provisions: Each Member State shall during the first stage ensure and subsequently maintain the application of the principle that men and women should receive equal pay for equal work. 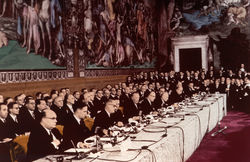 Europe’s institutions take pride in the fact that one of their founding values is the principle of equality between women and men[1]. Indeed, as early as the Treaty of Rome, the question of equal pay was the subject of negotiations that resulted in the adoption of Article 119, guaranteeing “the application of the principle that men and women should receive equal pay for equal work”.

On closer inspection, the motives that led the signatory countries to adopt this article are not linked, at least not directly, to considerations of justice or to egalitarian values that the Member States might have upheld right at the outset, thereby making equality a founding “value” of Europe’s institutions. No, the motives are above all economic in nature.

The Treaty of Rome is aimed at economic integration and not at a political or social union. Re-examining the genealogy of Article 119 sheds light on the tension between economic issues related to the organization of trade and production and social issues, particularly those related to justice and equality.

Article 119 seeks to organize fair competition within the new space for the ​​free movement of goods, services and people. Of the six countries signing the Treaty, it was France that demanded an article on equal pay. Indeed, unlike some of its partners, including Germany, France had already adopted legislation on women’s wages and equal pay. In the framework of restructuring industrial relations after the Second World War, the French State had developed occupational classifications and a wage hierarchy that led in some branches to affirming the principle of equal pay, even if there was still substantial potential for discrimination (Saglio, 2007). In July 1946, the Croizat decision abolished the 10% reduction on women’s wages. Finally, the Law of 11 February 1950 generalized collective bargaining agreements and introduced the principle of “equal pay for equal work” (Silvera, 2014).

France therefore feared that an opening up to competition in the market for goods and services would disadvantage productive sectors in which the proportion of women was high, especially in textiles (Rossilli, 1997). In 1956, the International Labour Organization (ILO), conscious of these issues, commissioned a report by a committee chaired by the economist Ohlin on the social consequences of European economic integration. The question of equal pay was raised explicitly (point 162, p. 64), and data at hand, the report denounced the risk of unfair competition in highly feminized industries (Ohlin, 1956) [2]. The differences in social rights between Member States called for labour market regulation in order to avoid distorting competition within the common market. The discussions, which led to Article 119, did not include discussion of women’s rights or fair pay for women’s work (Hoskyns, 1996).

The inclusion in the Treaty of Rome of the principle of equal pay was thus motivated by economic and not ethical considerations, and it is for economic reasons that, even though the principle was announced, it was not applied immediately, as it would have led to a massive increase in wage costs (unless men’s wages were cut). Despite all this, principles of justice were not completely alien to this process. Indeed, they were part of the international approach to the affirmation of human rights in the post-war years: the United Nations Universal Declaration of Human Rights of 1946 [3] affirms equal rights in its preamble, and the 1944 Declaration of Philadelphia, which underpinned the mandate of the ILO, states that, “all human beings, irrespective of race, creed or sex, have the right to pursue both their material well-being and their spiritual development in conditions of freedom and dignity, of economic security and equal opportunity” [4]. The ILO Equal Remuneration Convention (No. 100), adopted in 1951, states that, “Each Member shall, by means appropriate to the methods in operation for determining rates of remuneration, promote and, in so far as is consistent with such methods, ensure the application to all workers of the principle of equal remuneration for men and women workers for work of equal value” [5]. Some European countries adhered to the stated principles faster than others, including Belgium and France, which ratified Convention 100 respectively in 1952 and 1953. These countries pulled along their partner signatories to the Treaty of Rome in their path, in order to limit the distortion of competition that would result from a lack of uniform adherence to this principle of justice in an integrated economic area.

In looking further back at the genesis of texts pertaining to equal pay, economic motivations can also be found: the founding text of the ILO in 1919 does include the principle of equal pay, regardless of gender, for work of equal value (Section II., Article 427, 7) [6]. This particular attention to equality is explained partly by the trade unions’ fear that men’s wages might fall. Indeed, during the war, women had worked for lower wages doing jobs reserved for men in peacetime. Demanding equal pay made it possible to contain this unfair competition represented by women (Ellina, 2003; Hoskyns 1996).

The metamorphosis of Article 119

It is fruitless to seek the historical roots of the affirmation of the principle of equal pay, as the economic argument is articulated around considerations of justice. This dialectic led the actors of the moment to draw on one or to reaffirm the other. During the Treaty of Rome negotiations, differences between countries concerning entitlement to paid leave, the regulation of working time and the payment of overtime were also identified as sources of the distortion of competition. It is thus not so much the place of gender equality in the negotiations between the signatory countries that is to be questioned as the very nature of a Treaty that aims at economic integration and not the harmonization of the social policies of the signatory countries. At the time, economic integration was probably the least confrontational perspective from which to negotiate and bring about a rapprochement between European countries.

Article 119 of the Treaty of Rome, although intended to regulate competition, has become a pillar of the construction of European law on equality and the fight against discrimination. In the late 1970s, under the impetus of feminist movements, this principle was used more and more and became a founding principle of Europe’s institutions (Booth and Bennett, 2002). In 1971, the Court of Justice of the European Communities referred to it in declaring that the elimination of discrimination on the grounds of sex is one of the general principles of Community law (see the Defrenne judgment[7]). In 1976, the scope of equal pay was extended by the 1976 Directive (76/207) to cover all the terms of hiring and training as well as working conditions (Milewski and Sénac, 2014). As a tool for regulating the common market, it has become a principle of law.

Finding the spirit of Philadelphia once again

Since the 2000s, there has been a shift in the promotion of policy on equality: it is no longer a question of analyzing the economic consequences of the principles of justice or conversely of denouncing the infringement of the principles of justice of certain economic policies, but rather of overturning the hierarchy between the two perspectives. Equality is promoted in the name of the real or phantom economic benefits that it would produce. Supranational organizations, European institutions and national forces all tout the virtues of equality in terms of economic prosperity. The assertion of the principle of justice in itself is no longer sufficient to establish the merits of equality policies, which are a priori considered costly. Equality, which is often reduced to increasing women’s participation in the labour market and their access to positions of responsibility, is a source of growth and wealth. It is no longer a question of a complex articulation between economic forces and founding principles, but rather the justification of these principles based on the profitability or efficiency of the market economy (Périvier and Sénac, 2017, Sénac, 2015). This approach, far from anecdotal, is endangering equality as a principle of justice, and distances us from the humanist approach of the supranational institutions during the first half of the 20th century. Have we lost the spirit of Philadelphia (Supiot, 2010)?

Rossillli M., 1997. “The European Community Policy on the Equality of Women. From the Treaty of Rome to the Present”. The European Journal of Women’s Studies, 4, 63-82.