Economic outlook updated for the major developed countries in 2012

OFCE Department of Analysis and Forecasting, under the direction of Xavier Timbeau

The growth outlook for the developed countries, in Europe in particular, have deteriorated dramatically in recent weeks. The “voluntary and negotiated” devaluation of Greek sovereign debt securities, which is really nothing but a sovereign default, the wave of budget cuts being announced even as budget bills are still debated, the inability of the European Union to mobilize its forces to deal with the crisis – all these factors render the forecasts made two months ago obsolete. For many European countries, including France, 2012 will be a year of recession.

The growth figures for the second quarter of 2011 in the developed countries, published in August 2011, put the positive signals from early 2011 into perspective. In the third quarter of 2011, the national accounts were better than expected, but the respite was short-lived. The economic indicators for most of the developed countries (see below and a companion note) heralded a reduction in activity in the fourth quarter of 2011 and early 2012. The euro zone will be stagnant in 2012, with GDP growth of 0.4% and Germany recording the “best” performance in the euro zone (Table 1). 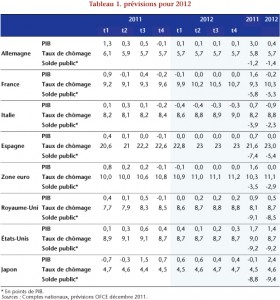 The first phase of the great recession, in 2008-2009, led to the swelling of public debt (about 16 points in the euro zone, more than 30 points in the US and UK, see Table 2). Phase II will be determined by how the public debt caused by the crisis has been digested: either low interest rates will make it possible to postpone the adjustment of public deficits and the economies can bounce back, thus easing the necessary adjustment, or the adjustment will be immediate, amplified by higher public interest rates and the persistence of under-employment (Table 3). Gripped by the fear of default, Europe is transforming the great recession that began in 2008 into a very great recession. 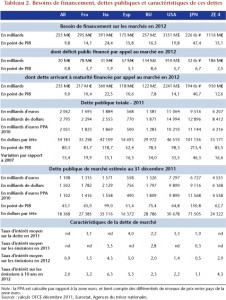 After the “voluntary” Greek default, the euro zone countries have inflicted on themselves not only an adjustment that was even more brutal than that required by the Stability and Growth Pact, but also contagion and a general collapse in sovereign debt. The measures proposed by the European Union, from the EFSF to the adoption of the “golden rule”, have not been persuasive of its ability to solve the public finance problems of the euro zone members either in the short or long term, especially as Europe seems to have forgotten that growth and the restoration of full employment are fundamental to the sustainability of public debt and to the European project more generally.

Faced with the risk of insolvency on sovereign debt, creditors are demanding higher risk premiums to continue to fund both new debt and the renewal of the fraction of old debt that is expiring. The hardening of financing conditions, even as business prospects are deteriorating as a result of budget cuts, is nipping attempts at fiscal consolidation in the bud. The result: a downward spiral. The rising cost of debt adds to interest charges, which undercuts deficit reduction and leads to additional fiscal discipline to reassure donors. The added restrictions weigh on activity and wind up augmenting the cyclical deficits – at which point the governments, panicked at the stubborn resistance of the deficits and the prospect of a downgrade in their sovereign rating, respond with even greater rigor.

Because the economies of the European countries are so closely intertwined, the simultaneous implementation of restrictive fiscal policies leads to magnifying the global economic slowdown by undercutting foreign trade (we developed this point in our previous forecasting exercise). Restrictive policies hit domestic demand in whichever countries implement them and thus reduce their output, but also their imports. This dynamic decreases the exports of their trading partners, and therefore their activity, regardless of their own fiscal policies. If these partners also implement a restrictive policy, then an external impact has to be added to the internal restriction (an indirect effect). The magnitude of these effects depends on several factors. The direct effects are mainly linked to negative impulses within each country. The indirect effect is more difficult to measure, since it depends on the degree of openness of each country, the geographical distribution of its exports and the elasticity of imports to GDP of the countries that are tightening their policy. Thus, a very open country for which the majority of exports are going to a country undertaking severe budget cuts will suffer a strong indirect effect. In this respect, the highly integrated countries of the euro zone will suffer more from the restrictive policies of their partners than will the United States or Japan. Their growth will be seriously curtailed, pushing back deficit reduction. In many countries, the coming recession is the result of the increasingly restrictive measures being taken to try to stabilize their debt / GDP ratio as soon as possible in an increasingly unfavourable economic environment.

The race to tighten up to try to bring public deficits below 3% of GDP and to stabilize debt ratios is aimed as much at meeting the requirements of European agreements as it is at reassuring the rating agencies and financial markets. The latter, among them the European banks, hold at least 50% of the public debt of the developed countries in the form of securities issued by the national debt agencies. This percentage varies from 77% of the public debt held by financial institutions in France to 97% for Spain.

In the euro zone, between 9 and 23 percentage points of GDP of public debt, depending on the country, needs to be renewed in 2012 (see Table 2). Outside of Japan, it is Italy, which combines a high debt with a large proportion of short-dated securities, which will have the largest financing requirement. If requirements related to the financing of the public deficit in 2012 are added to this, then the potential for total issues in the euro zone ranges between 10% of GDP in Germany to 24% in Italy.

These high levels are posing problems for countries that have lost the confidence of the markets. If the interest rates at which these countries are financed in 2012 remain at their average levels for the last quarter of 2011, Spain would borrow at 5% and Italy at 4.3%. France and Germany, however, would continue to benefit from low interest rates (1.5% and 0.9% respectively). The issue rates in December 2011 for these two countries have up to now been little affected by the threats to downgrade the sovereign debt of the euro zone countries. Even though the financing need from the markets was greater in 2012 for the United Kingdom, the United States and Japan than for the euro zone, their rates have remained low. Paradoxically, the downgrading of the US sovereign rating in August 2011 was accompanied by a decrease in 10-year rates and short-term rates in the United States. Within this context of a flight to safety, the programs of massive purchases of government securities on the secondary market that were implemented by the Federal Reserve (FED), the Bank of England (BoE) and the Bank of Japan have been keeping public long-term rates low. Monetary policy is also affecting short-term interest rates as well as long-term rates. The role of lender of last resort being adopted by these central banks is thus reassuring the markets and avoiding higher interest rates during Treasury auctions. In contrast, the ECB’s mandate and the strict supervision of Europe’s legal scaffolding limit ECB action. The relatively low amounts of government bonds purchased since 2010 (2.3% of euro zone GDP compared with 11% of US GDP for the Fed and 13% of UK GDP for the BoE) and tension between euro zone countries concerning the role of the central bank is fueling demands by investors to protect their risks by raising premiums.

To stop the collapse of European sovereign debt, we must rule out any possibility of a sovereign default, public interest rates must be reduced to the maximum by all means possible, and a European strategy for stabilizing the public debt needs to be implemented, first by dealing with under-employment, thereby renewing growth, followed by an adjustment of public finances.