Unemployment: beyond the (good) figures from France’s job centre

The 60,000 person decline in March for the number of people registered in Category A at France’s Pôle emploi job centre is exceptional. One has to go back to September 2000 to find a fall of this magnitude. There is some natural volatility in the monthly statistics for job seekers, but the fact remains that the trajectory has changed noticeably. In the last year, the number registered in Category A at the job centre rose by 17,000. A year earlier, from March 2014 to March 2015, the increase was 164,000. Better yet, over the last six months the number registered fell by 19,000.

Nevertheless, the number of Category A job seekers is a relatively poor reflection of the multiple dynamics at work in the labour market. If, in addition to job seekers registered in Category A, we add those working reduced hours (categories B and C), the March upturn remains visible, but smaller. The number registered in categories A-B-C falls slightly in March (8700 people) but also over 3 months (down 23,900).

Once again, however, beyond the good results in March, given the continuing deterioration of the labour market and the emergence of more precarious situations with regard to employment over the last eight years, there will be no lasting improvement in households’ job situation until these “good figures” have accumulated over a medium-term horizon.

These monthly figures provide only a partial representation of unemployment. They omit in particular people seeking employment who are not registered at the job agency. As for those registered in Category A, people are also counted who are not performing a real job search because they are close to retirement (see The elimination of the job search exemption: When governments voluntarily increase the jobless count! – in French). In addition, the figures released by the job centre can be distorted by changes in administrative practices and by occasional technical problems that affect the management of the job centre’s files.

The quarterly figures provided by the INSEE are a more reliable source for the analysis of unemployment. According to the employment survey, a person is considered “unemployed within the meaning of the International Labour Office (ILO)” if he or she meets the following three conditions:

Based on these criteria, the unemployment rate in metropolitan France in the fourth quarter of 2015 stood at 10% of the active population (+871,000 people since Q4 2007).

…that help to better measure the precarity of the labour market

But this definition is still restrictive. It still fails to take into account situations at the margins of unemployment. Thus people who want to work but are considered inactive in the ILO sense, either because they are not readily available for work (within two weeks) or because they are not actively seeking a job, form what is called the unemployment “halo”. In the fourth quarter, this halo included 1.41 million people (+25% over the fourth quarter of 2007, i.e. an additional 279,000 people).

In total, by incorporating underemployment and the “halo” into the strict definition of ILO-measured unemployment, 5.9 million people are in a weakened position with regard to employment, 31% more than eight years ago, i.e. 18.8% of the workforce broadly speaking (Figure 1) [1]. 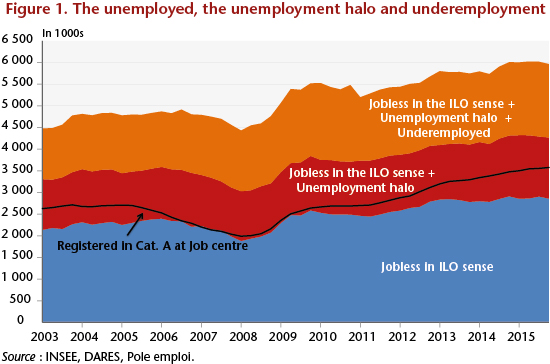 The analysis of the unemployment rate does not therefore include all the dynamics at play in the labour market. The increase in the number of people experiencing underemployment is partly explained by adjustments in the effective working time, via the policy on partial unemployment, the reduction of overtime and the use of working-time accounts, but also through the expansion of part-time work, including on an involuntary basis. While these adjustments increased underemployment, they also helped slow the rise in unemployment (in the strict sense) that started in mid-2008. Without these adjustments, in other words, if the hours worked had remained stable between 2007 and 2015, the ILO-based unemployment rate in France would have been 0.6 points higher in the fourth quarter of 2015 (Figure 2).

Along with these adjustments in working time, since the beginning of the crisis France has also experienced greater growth in the labour force (employed + unemployed) than in its overall population. This is attributable partly to the implementation of pension reforms that delay seniors’ exit from the workforce. Mechanically, without the creation of new jobs, this growth in the labour force has had the effect of pushing up the unemployment rate. In the case of France, the impact has been massive. Indeed, if the participation rate had remained at its 2007 level, the unemployment rate in France would be, all else being equal, 8.2%, i.e. 1.6 points lower than the unemployment rate observed in the fourth quarter of 2015. 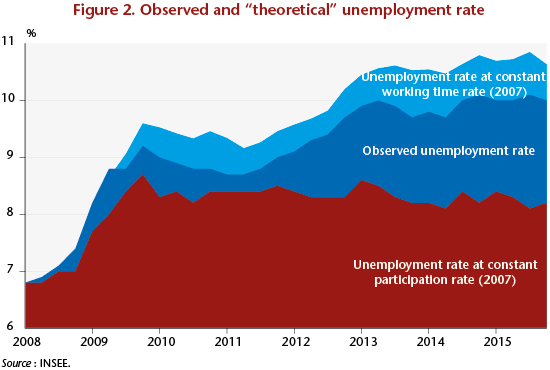 It must nevertheless be noted that while these adjustments are important, the developments on which they are based are not fully due to the crisis. Indeed, there has been a tendency for working time to decrease since 1990. Between 1990 and 2002, the effective working time decreased on average by 0.9% per year. While this decline has certainly been less rapid since 2003, it is continuing (-0.2% per year). At the same time, the participation rate has been rising continuously, due to the combined effects of the increase in women’s participation in the labour market and the successive reforms of the pension system. The participation rate in France, which stood at 67.1% in 1990, reached 69.7% in 2007, and in the fourth quarter of 2015 had risen to 71.5%.