The unemployment figures for the month of July 2015 indicate a slight fall (-1900) in the number of people registering in category A. There is still too much uncertainty about monthly changes in enrolment at France’s Pôle Emploi job centre to conclude that there has been a lasting improvement in the state of the labour market. However, the increase observed since January 2015 (+50,900 registered in category A) is smaller in scale than the figures recorded for this same period during the past three years (+128,500 on average for the first seven months of the previous three years). It is comparable to the situation in 2010-2011 (+44,300 on average in the first seven months of both years), which were years of renewed growth.

Seen in the context of the first buds of recovery, this trend in unemployment is not surprising. First, the pick-up in GDP growth observed in the first six months (+0.7% according to preliminary accounts published by the INSEE) is expected to gain pace in the coming quarters. For now, this recovery has meant a rise in salaried employment of +26,600 in the competitive sector during the first six months of 2015. This has been sufficient to limit the increase in unemployment, without however reversing it, as labour force numbers have increased by about 75,000 during the half year.

Furthermore, the increase in registrations in categories B and C [1] has been more marked than for category A (+145,600 since the year’s start). This is due partly to some switching by the jobless in category A into these other categories, which reflects an increase in precarious employment that is consistent with the increase in temporary jobs in the first half year (+11,600): historically, an improvement in the labour market starts with an increase in precarious jobs (fixed term, temporary). This is also coinciding with an increase in job offers collected by Pôle Emploi, as well as with exits from the job centre due to a return to work, a figure that reflects a return to levels comparable to those observed in 2010-2011. 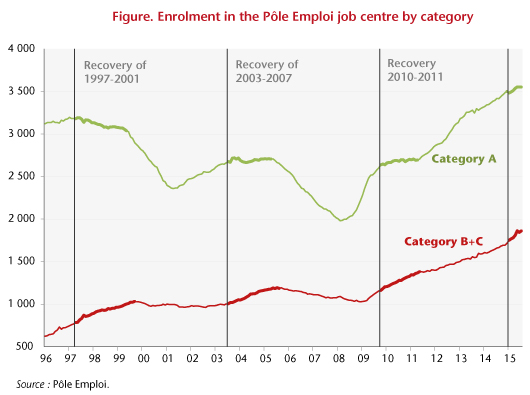 Finally, the trends differ by age group: the number of people under age 25 registered in category A is 4,600 lower than its level at year-end 2014. In fact, the young, who are over-represented in so-called temporary jobs (34.2% of young people in work are on fixed-term CDD contracts or are temping, compared with 8.4% of those in other age groups), benefit from the creation of this type of job, and from the increase in subsidized jobs that are targeted specifically at their age group. Conversely, the enrolment in category A of people aged 50 and over is rising steadily (+36,100 since the year started). 62% of those aged 50 and older have been enrolled in the job centre for over a year, versus an average of 39% for other age groups.

[1] These categories group people who have worked on reduced hours during the month, but are still registered at Pôle emploi.