By Analysis and Forecasting Department (OFCE-DAP)

While the slowing increase in the number of job seekers registered with France’s Pôle Emploi unemployment agency in the first quarter of 2015 could be seen as the premise of the long-awaited downturn in the unemployment curve, the figures released today once again cast doubt on this prospect, at least in the short term. The registration of 26,200 additional people in category A at the agency in April brings the increase in job seekers back to a high rate, well above the average over the last two years (13,400 per month) and far from the virtual stability seen in the first quarter (+3,000 per month).

While the publication of strong figures for first-quarter GDP growth (+ 0.6%) reaffirmed the prospect of a recovery, the jobless numbers are disappointing. Don’t forget, however, that employment does not immediately respond to a pick-up in activity; it will take time to reap the benefits for the labour market of the good growth experienced at the year’s beginning, when the recovery has proven to be strong, pushing employers to recruit. For now, companies are still digesting the overstaffing inherited from the period of very low growth between 2011 and 2014. The fall in unemployment that can be foreseen with the recovery will not take place until the second half of 2015. But the acceleration of job centre registrations in April sends a contrary signal.

The situation seems to be generally worsening among all sections of job seekers: men, women, and all age categories. The number of unemployed under age 25 has been rising again the last months (9,500 people). But changes like these are often volatile, and should be treated with caution: they come in counterpoint to an equivalent fall in numbers during the first two months of 2015. Over a one-year period, the increase was only 11,900, and the interruption in the rise in youth unemployment since April 2013 signalled success for the jobs policy targeted at this group (see the figure). The announcement by the Minister of Labour of the creation of 100,000 additional subsidized jobs reflects the government’s perhaps belated determination to beef up this programme at a time when the economic outlook is improving. 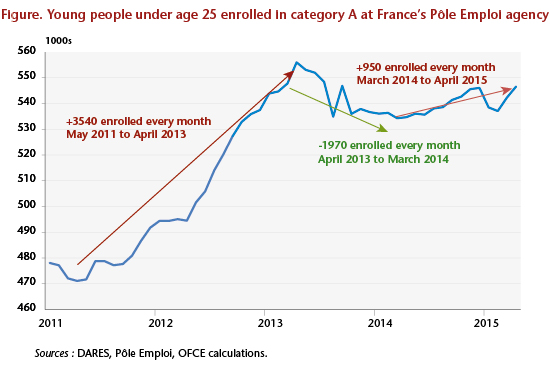