An unprecedented retreat by the euro zone’s banks

Another small step was taken last month towards a euro zone banking union when the European Commission presented its proposal for the union’s Single Resolution Fund [1].  While observers generally agree that the 55 billion euros in the Fund are just a drop in the ocean, we show in a recent study that the euro zone’s banks are increasingly isolated from the rest of the world (Bouvatier, Delatte, 2014 [2]). In reality, the fragmentation of the euro zone’s banks that the banking union is supposed to resolve is merely one aspect of the international disintegration of Europe’s banks.

In 2013, cross-border capital flows came to only 40% of their 2007 levels, and the largest decrease in activity was in international bank lending. Figure 1 shows changes in foreign claims by the banks of 14 countries vis-à-vis their partners and breaks the data down by whether the banks are in the euro zone or not.[3] 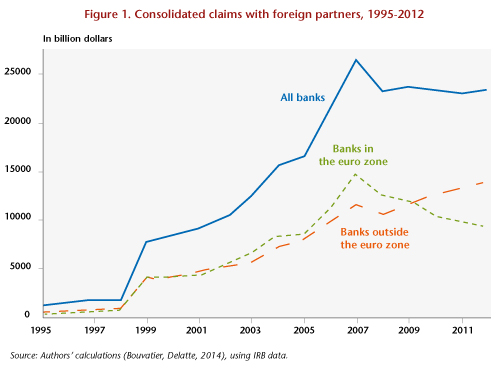 The global financial crisis undoubtedly dealt a serious setback to banking activities: in 2008, foreign claims declined significantly, and then remained at this lower level. However, the aggregated situation conceals two conflicting trends. While the international activities of banks outside the euro zone were undoubtedly hit hard in 2007, they quickly began to pick up again thereafter. In contrast, the activity outside the euro zone of the euro zone’s banks has continued to fall. In 2012, the euro zone’s banks accounted for 40% of international banking activity, compared with 56% in 2007. In short, the raw data suggest:

(1)    A massive downturn for banks located in the euro zone, and

(2)    An interruption that was only temporary for banks located outside the euro zone.

To what extent can these different trends be explained by differences in economic conditions between the euro zone and the rest of the world? The countries of Europe have in fact faced a series of crises since 2008 (the financial crisis, then the sovereign debt crisis), and today the euro zone is one of the few regions where growth has not resumed. At the same time, the past decade has resulted in a sharp increase in banking integration in the euro zone. So is this just a correction? Also, what differences are there in the way banking integration has taken place in the euro zone and in the rest of the world? To answer these questions, we have developed a unique way to measure international banking integration. Our measure is based on a statistical model of banking that can isolate frictions and variable factors over time [4]. We have extracted temporal trends by geographic region, which enables us to measure at each date where banking activity is at in comparison with the model’s predictions. The four charts in Figure 2 show our measurements. 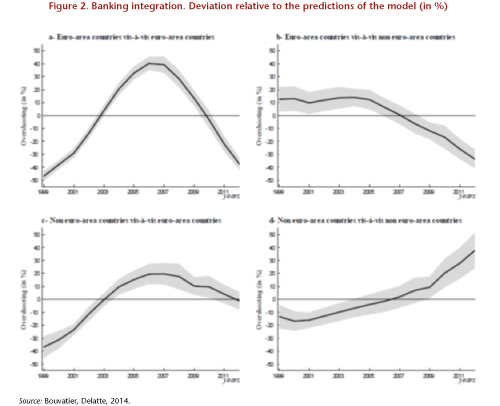 First, it is striking to note that, following the financial crisis of 2008, all the trends in the euro zone were down (Figures 2-a, 2-b and 2-c), in contrast to the situation in the rest of the world (Figure 2-d). Then we see that only banks in the euro zone are going through a process of disintegration (the curve is below the x-axis in Figures 2-a and 2-b). In contrast, the exposure to euro zone debt of banks located outside the euro zone is at precisely the level predicted by the model (Figure 2-c). In other words, non-European banks are less involved in the euro zone, but this is a correction of the 20% excess existing prior to the crisis, and not a downturn. In contrast, the euro zone’s banks have massively reduced their international exposure to inside and outside the euro zone, with a level that is over 30% below the model’s predictions. Thus, the banks’ massive pull-back is not due solely to the economic slowdown in the euro zone since 2008 (as our estimates take the slowdown into account). More importantly, this decline goes well beyond a correction and indeed constitutes a significant level of disintegration. In other words, the bank fragmentation taking place in the euro zone is merely one part of a larger process of the disintegration of the euro zone’s banks.

Finally, Figure 2-d, which traces the situation in the rest of the world, highlights a surprising difference: not only has banking integration not weakened, but, on the contrary, the trend grew stronger after the crisis. In other words, the downturn in banking activity observed in 2008 in the raw data was due entirely to temporary frictions.

Based on these observations, we can draw the following conclusions. First, our estimates suggest that the euro zone’s banks have permanently lost market share at the global level. Second, it is striking to note that the banking integration achieved through the monetary union has been totally erased in recent years. In other words, the benefits conferred by the single currency have fallen in number, while the costs are continuing to rise. Finally, our results concerning the mass pull-back of the euro zone’s banks vis-à-vis the rest of the world suggest that the banking union, though crucial to supplement the single currency, will not be enough to meet the banking challenges facing the euro zone.

[3] Among the 14 countries reporting, seven belong to the euro zone: Austria, Belgium, Germany, Spain, France, Italy and the Netherlands. The seven other countries are Canada, Switzerland, Denmark, the United Kingdom, Japan, Sweden and the United States.

[4] More specifically, we have used the approach of Portes and Rey (2005), who were the first to estimate gravity equations to study the determinants of financial activity. See Portes, R. and H. Rey (2005), “The determinants of cross-border equity flows”, Journal of International Economics 65(2), 269-296.