The figures for the month of August 2015 published by France’s Pôle Emploi job centre show a significant increase in the number of people registered as Category A (+20,000), i.e. an additional 156,000 job seekers over one year, following two months of relative stability. While this figure is undoubtedly disappointing, the uncertainty surrounding monthly fluctuations in enrolment at the job centre should not be forgotten. Despite the downturn in the numbers registered in categories B and C in the last month (-11,600), the number of job seekers who have carried out an active job search has risen by nearly 332,000 since August 2014.

This figure nuances the publication of the unemployment rate as defined by the International Labour Office (ILO), which gives a less negative image of the French labour market. This statistic points to a slight fall in the unemployment rate in the first six months (-0.1 point), largely due to shrinkage of the labor force (-0.2 point).

Beyond the total figure, the data published for August confirms the divergences observed between different age groups. While up to September 2010 the number of people aged 50 or over registered in Category A at the job centre was lower than for the under 25 age group, there are now 330,000 more unemployed seniors than unemployed youth (graph). The increase in this gap since 2010 is due to several factors. The implementation of a series of pension reforms (2003, 2010), coupled with the elimination of exemptions for seniors on job-seeking, has led to a longer duration of employment and a later statutory retirement age. In a context of weak growth, the rise in the rate of senior employment has been insufficient to absorb the growth in the workforce for that age group, resulting in a higher unemployment rate for the over 50s.

The weaker increase in the number of unemployed youth is the result of two main factors. First, the employment policies implemented since 2013 have targeted youth in particular, including the emplois d’avenir programme. Second, the weak job creation in the market sector has mainly taken the form of temporary jobs (CDD fixed-term and temporary contracts), an area in which young people are heavily represented (34.2% of young people in employment are on CDD contracts or temping, versus 8.4% for other age groups).

Finally, while seniors are unemployed less often than young people (4.6% of those aged 50-64 against 8.6% for 15-24-year-olds), they are more exposed to long-term unemployment. 62% of the seniors registered at Pole Emploi have been jobless for more than a year, against 21% of young people.

All this indicates that only a macroeconomic policy aimed at increasing the overall level of employment is capable of simultaneously dealing with unemployment among both young people and seniors. Otherwise, in a situation where employment is lacking overall, policies that are aimed at certain categories, even if effective for that specific target, may lead to adverse effects on other categories. 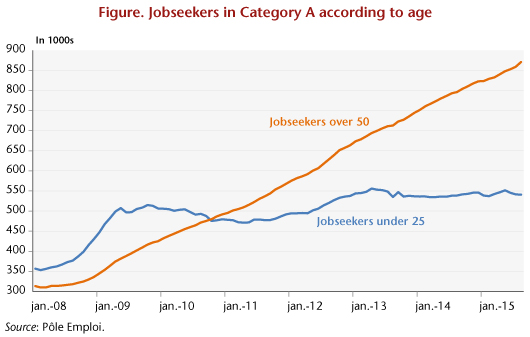