In the course of the crisis, most European countries reduced actual working hours to a greater or lesser extent through partial unemployment schemes, the reduction of overtime or the use of time savings accounts, but also through the expansion of part-time work (particularly in Italy and Spain), including on an involuntary basis. In contrast, the favourable trend in US unemployment has been due in part to a significant fall in the labour force participation rate.

Assuming that a one-point increase in the participation rate leads, holding employment constant, to a rise in the unemployment rate, it is possible to measure the impact of these adjustments (working hours and participation rates) on unemployment by calculating an unemployment rate at constant employment and checking these adjustments. Except in the United States, the countries studied experienced an increase in their active population (employed + unemployed) that was larger than that observed in the general population, due among other things to the implementation of pension reforms. Mechanically, without job creation, this demographic growth would have the effect of pushing up the unemployment rate in the countries concerned.

The lessons are very different with respect to the duration of work. It seems that if working hours had stayed at their pre-crisis levels in all the countries, the unemployment rate would have been 3.7 points higher in Germany and 2.9 points higher in Italy. In France, Spain, the United Kingdom and the United States, working time has fallen only slightly since the crisis. If working hours had remained the same as in 2007, the unemployment rate would have been slightly higher in all of these countries.

Note that the trend for working time to fall largely preceded the 2007 economic crisis (table). While this pre-crisis trend has continued in Germany and even been accentuated in Italy, working time has fallen to a lesser extent in France, Spain and the United States. In the United Kingdom, the reduction in working hours that was underway before 2007 has been cut short. 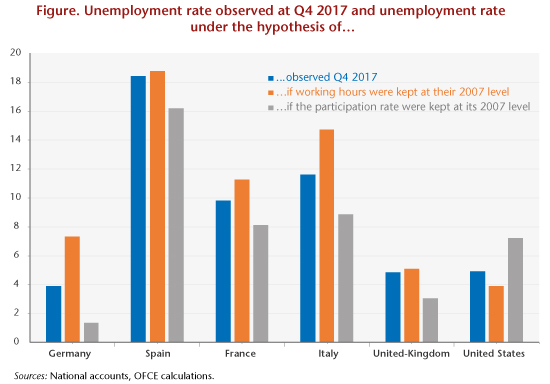