“France should copy Germany’s reforms to thrive”, Gerhard Schröder entitled an opinion piece in the Financial Times on 5 June 2013. As for the European Commission (EC), its latest annual recommendations to the Member states, released on 29 May, seem to take a step back from its strategy of a rapid and synchronized return to balancing the public finances, which has been in place since 2010. The EU executive’s priority now seems to be implementation of structural reforms of the labour and services markets in the euro zone countries. These countries will of course continue to consolidate their public finances, but the EC has given them an extra year or two to do this. While, for example, France will further consolidate its accounts over the coming two years (the fiscal effort demanded of the French government by the EC comes to 0.8 percent of GDP, or 16 billion euros per year), it has been given another two years to bring its deficit below 3% of GDP (2015 instead of 2013).

This change in course – or at least in tone – by the EC, which had emphasized the enactment of extreme austerity reforms, should be welcomed. However, it is important to consider whether the new environment, in particular the fiscal situation, will be favourable enough to ensure that the structural reforms are effective. An examination of the economic context in which Germany introduced its reforms in the early 2000s, which became a benchmark for the countries of southern Europe, provides some important lessons. While the purpose here is not to go into these reforms in depth, it is nevertheless useful to remember that they were enacted while the German economy had a substantial trade deficit (‑1.8 percent of GDP in 2000 against a surplus of 1.4 percent for France at that same time) and was considered a “low achiever” in Europe. These reforms led to a significant reduction in the share of wages in value added, boosting the margins of German business, and helped to quickly restore the competitiveness of the German economy: by 2005, Germany was once again generating a large trade surplus while France ran a deficit for the first time since 1991. The non-cooperative character of the the euro zone (OFCE, 2006) and the steep increases in Germany in poverty – (Heyer, 2012) and Figure 1 – and in wealth inequality (de Grauwe et Yi, 2013) were the hidden fruit of this strategy. Europe’s “low achievers” today are the southern European countries, and the pressure to take steps to boost competitiveness has shifted from Germany to France, Italy and Spain. Despite this parallel, the question remains: is the economic environment similar today? Figures 1 and 2 summarize the economic situation in Germany at the time the structural reforms were implemented. Two main points stand out: 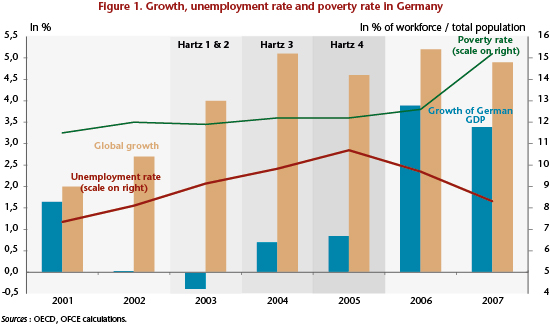 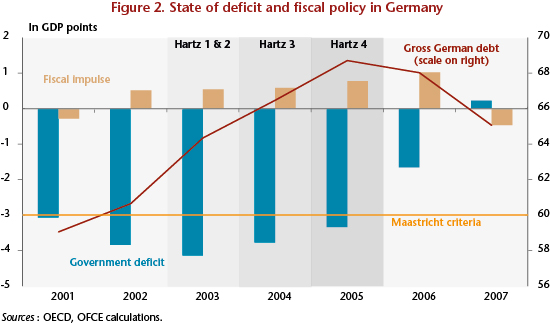 Thus not only was the structural reform of the labour market conducted under Schröder implemented in a very favourable economic environment (strong global growth and a strategy that differed from the other European countries), but it was also accompanied by a particularly accommodative fiscal policy, given in particular the poor state of Germany’s public finances. This situation differs greatly from contemporary conditions:

So while the pressure to boost the competitiveness of the countries of southern Europe is similar to that facing Germany in the early 2000s, the external environment is less favourable and there is greater pressure to reduce the public debt. On this last point, the German example teaches us that it is difficult to juggle structural reforms to boost business competitiveness with efforts to reduce the public debt.