The crisis affecting the euro zone is the result of macroeconomic and financial imbalances that developed during the 2000s. The European economies that have provoked doubt about the sustainability of their public finances (Spain, Portugal, Greece and Italy [1]) are those that ran up the highest current account deficits before the crisis and that saw sharp deteriorations in competitiveness between 2000 and 2007. Over that same period Germany gained competitiveness and built up growing surpluses, to such an extent that it has become a model to be emulated across the euro zone, and especially in the countries of southern Europe. Unit labor costs actually fell in Germany starting in 2003, at a time when moderate wage agreements were being agreed between trade unions and employers and the coalition government led by Gerhard Schröder was implementing a comprehensive programme of structural reform. This programme was designed to make the labour market [2] more flexible and reform the financing of social protection but also to restore competitiveness. The concept of competitiveness is nevertheless complex and reflects a number of factors (integration into the international division of production processes, development of a manufacturing network that boosts network effects and innovation, etc.), which also play an important role.

In addition, as is highlighted in a recent analysis by Eric Heyer, Germany’s structural reforms were accompanied by a broadly expansionary fiscal policy. Today, the incentive to improve competitiveness, strengthened by the implementation of improved monitoring of macroeconomic imbalances (see here), is part of a context marked by continued fiscal adjustment and high levels of unemployment. In these conditions, the implementation of structural reforms coupled with a hunt for gains in competitiveness could plunge the entire euro zone into a deflationary situation. In fact, Spain and Greece have already been experiencing deflation, and it is threatening other southern Europe countries, as we show in our latest forecast. This is mainly the result of the deep recession hitting these countries. But the process is also being directly fueled by reductions in public sector wages, as well as in the minimum wage (in the case of Greece). Moreover, some countries have cut unemployment benefits (Greece, Spain, Portugal) and simplified redundancy procedures (Italy, Greece, Portugal). Reducing job protection and simplifying dismissal procedures increases the likelihood of being unemployed. In a context of under-employment and sluggish demand, the result is further downward pressure on wages, thereby increasing the deflationary risks. Furthermore, there has also been an emphasis on decentralizing the wage bargaining process so that they are more in tune with business realities. This is leading to a loss of bargaining power on the part of trade unions and employees, which in turn is likely to strengthen downward pressure on real wages.

The euro zone countries are pursuing a non-cooperative strategy that is generating gains in market share mainly at the expense of other European trading partners. Thus since 2008 or 2009 Greece, Spain, Portugal and Ireland have improved their competitiveness relative to the other industrialized countries (see graph). The continuation of this strategy of reducing labor costs could plunge the euro zone into a deflationary spiral, as the countries losing market share seek in turn to regain competitiveness by reducing their own labour costs. Indeed, this non-cooperative strategy, initiated by Germany in the 2000s, has already contributed to the crisis in the euro zone (see the box on p.52 of the ILO report published in 2012). It is of course futile to hope that the continuation of this strategy will provide a solution to the current crisis. On the contrary, new problems will arise, since deflation [3] will make the process of reducing both public and private debt more expensive, since debt expressed in real terms will rise as prices fall: this will keep the euro zone in a state of recession. 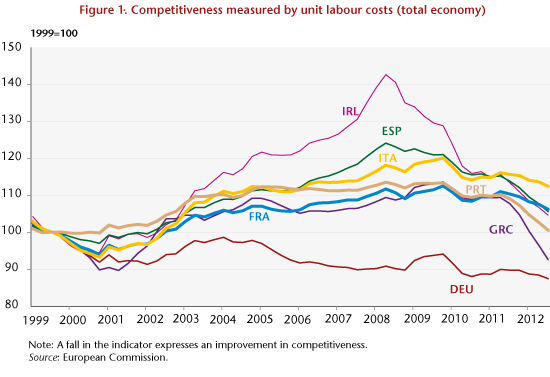 [1] The Irish case is somewhat distinct, as the current account deficit seen in 2007 was due not to trade, but a shortfall in income.

[2] These reforms are examined in detail in a report by the Conseil d’analyse économique (no. 102). They are summarized in a special study La quête de la compétitivité ouvre la voie de la déflation (“The quest for competitiveness opens the door to deflation”).

[3] For a more comprehensive view of the dynamics of debt-driven deflation, see here.