by Analysis and Forecasting Department

This text summarizes the OFCE’s 2017-2019 forecast for the global economy and the euro zone; the full version can be found here.

Ten years after the financial crisis broke out in the summer of 2007, the world economy finally seems to be embarking on a trajectory of more solid growth in both the industrialized and most of the emerging countries. The figures for the first half of 2017 indicate that global growth is accelerating, which should result in GDP growth of 3.3% over the year as a whole, up 0.3 percentage point over the previous year. Some uncertainty remains, of course, in particular concerning the outcome of Brexit and the ability of the Chinese authorities to control their economic slowdown, but these are the types of irreducible uncertainties characteristic of an economic system that is subject to political, technological, economic and financial shocks[1]. Beyond these risks, which should not be underestimated, lies the question of the ability of the world’s economies to reduce the imbalances inherited from the crisis. While current growth is sufficient to bring down the unemployment rate and improve the employment rate, it needs to be long-lasting enough to get back to full employment, reduce inequalities, and promote debt reduction.

In this respect, not all the doubts have been lifted by the current upturn in the world’s economic situation. First, growth has remained moderate in light of the past recession and previous episodes of recovery. Since 2012, the global economy has grown at an average rate of 3.2%, which is lower than in the 2000s (graphic). The growth trajectory seems to be closer to what was observed in the 1980s and 1990s. This period, the so-called Great Moderation, was characterized by lower macroeconomic volatility and a disinflationary trend, first in the advanced countries, then in the emerging countries. This second element is also an important point in the global economic situation today. Indeed, the pick-up in growth is not translating into renewed inflation. The low rate of inflation reflects the persistence of underemployment in the labor market, which is holding back wage growth. It also illustrates the difficulties the central banks are having in (re)-anchoring inflation expectations on their target.

Finally, there is the matter of the growth potential. Despite numerous uncertainties about measuring growth potential, many estimates are converging on a projection of weaker long-term growth, due mainly to a slowdown in trend productivity. It should be noted, however, that the methods used to determine this growth trajectory sometimes lead to prolonging recent trends, and can therefore become self-fulfilling if they lead private and public agents to reduce their spending in anticipation of a slowdown in growth. Conversely, boosting future growth requires private and public investment. Economic policies must therefore continue to play a leading role in supporting the recovery and creating the conditions for future growth. 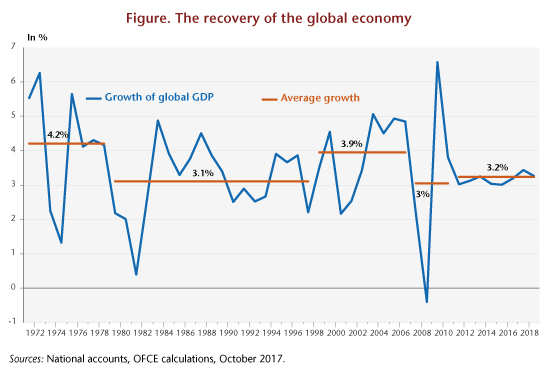