A recession is not inevitable

The cold blast from the autumn forecasts continues with the publication of the European Central Bank’s latest forecasts. Revising its growth outlook for the euro zone downwards (to -0.3% for 2013, against the forecast of 0.9% in September), the ECB in turn is now pointing to the reinforced austerity measures and the growing impact of uncertainty in the financial markets. It is clear that the intensity of the fiscal consolidation is paralyzing growth in the euro zone through the interplay of the fiscal multipliers, while not managing to restore confidence. In this note we show that the recessionary spiral that the euro zone is getting sucked into is not an inevitability.

In the first edition of the 2013 iAGS report, which was produced in partnership with the German IMK institute and the Danish ECLM institute, the OFCE offers an alternative strategy to the current fiscal consolidation policy. This alternative would make it possible to restore growth in the medium term while still meeting the European budget commitments. As Jérôme Creel showed in his latest post, “Could France have a different fiscal policy?”, there is room for budgetary manoeuvring in a way that is consistent with the current treaty framework.

Under the aegis of the European Commission, the European countries have pledged to continue their austerity programmes from 2013 to 2015 on a relatively large scale, especially if we take into account the efforts already made. Apart from Germany, where the cumulative fiscal impulse will be virtually nil, most European countries are planning to reduce their primary structural deficit by more than 2 GDP points between 2012 and 2015 (from -1.4 points for Finland to -7.5 points for Greece, cf. the table).

These adjustments are being undertaken in a very poor economic climate, which has been marked by austerity budgets from 2010 to 2012: growth in the euro zone will be -0.4% in 2012 and -0.3% in 2013. However, according to a series of recent theoretical and empirical studies[1], the fiscal multipliers turn upwards as the economic cycle heads downwards. In this context, the speed and magnitude of the fiscal adjustment is especially costly in terms of growth, and thus counter-productive in terms of the fiscal consolidation.[2] Encouraging a return to growth by easing the austerity would enable the economies of the euro zone to pull out of their recessionary spiral, which is marked by a steep rise in unemployment.

In order to develop this alternative strategy, we used the iAGS model to carry out simulations for the euro zone countries over a period of 20 years. These were conducted in two steps: 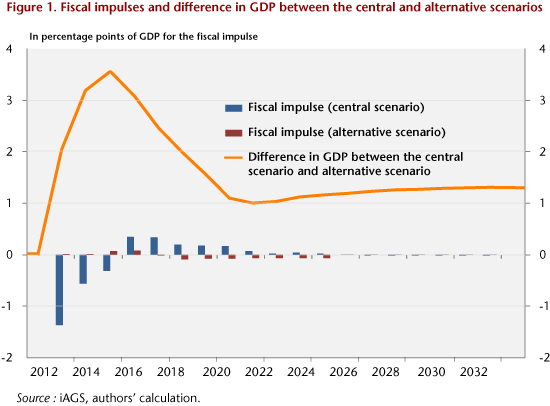 Figure 1 shows the difference in the level of GDP between the two scenarios. Limiting the size of the fiscal impulses helps to achieve a higher level of GDP and is compatible with a debt target of 60% of GDP by 2032 (alternative scenario). The effectiveness of the fiscal consolidation is enhanced when it is being conducted in an environment that is less unfavourable to the economy. This strategy achieves the same debt target with a cumulative fiscal adjustment that is 50 billion euros less than in the central scenario.

According to our calculations, the alternative scenario would restore a 2% growth rate in the euro zone in 2013, compared with -0.3% if the planned fiscal policies are carried out. The revival of activity would boost the labour market and help to turn around the unemployment rate in 2013, with a decline to 10.2% in 2015, compared with 12.8% if the austerity policies are continued, representing 3 million fewer unemployed people in 2015. 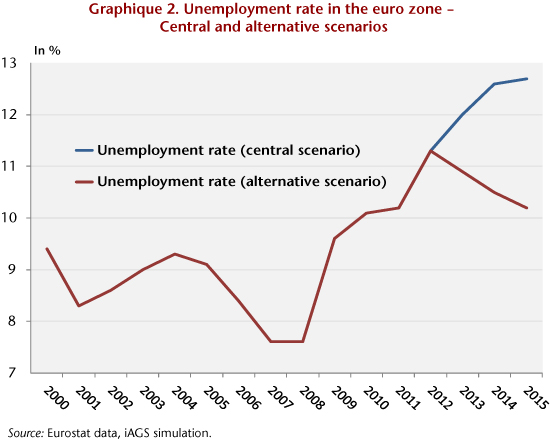 [1] A review of the recent literature on fiscal multipliers: size matters!

[2] What is the value of the fiscal multipliers today?