Should deficit reduction be the priority of governments today?

The constraints imposed by the Stability Pact and especially by the financial markets on Europe’s governments do not leave them much leeway. But while there is no avoiding the issue of the sustainability of public debt, we also need to take into account the recessionary impact of austerity programs on economic activity, particularly during a period of recovery. The great majority of studies point to a positive multiplier effect, that is to say, a one point cut (expansion) in the budget results in a decrease (increase) in activity. Furthermore, studies have highlighted that in order to maximize a policy’s impact, its timing is crucial: the impact on growth and on the public deficit (via its cyclical component) depends on whether or not it is supported by monetary policy, on the fiscal policy conducted by other countries, on the phase of the cycle, and so forth.

Fiscal consolidation, for example, has less impact on activity when it is accompanied by a relaxation in monetary policy and by a currency depreciation. But when interest rates are already close to zero (or in the case of a liquidity trap), the impact of fiscal restraint is not cushioned by a fall in base rates. As the central bank cannot counter disinflation, real interest rates rise, which amplifies the fall in activity. Moreover, in a context of generalized tightening, the exchange rate cannot be a means of supporting activity in every area. This is also true when a policy of fiscal restraint is being implemented within a monetary union where the countries trade mainly among themselves. Thus, according to the IMF, the impact on growth of a budget cut of 1 GDP point can vary between 0.5% and 2%, depending on whether or not an austerity program is synchronized with the response of monetary policy (Table 1).

Ultimately, the impact on growth feeds back into the state of public finances. When monetary policy can counteract the recessionary effects of fiscal policy, a one-off budget cut of a single GDP point reduces activity by 0.5% after two years. The deterioration in the cyclical deficit then comes to 0.25 GDP point, and the balance ultimately improves by 0.75 point. When interest rates are near zero, a one point negative fiscal stimulus in a country reduces growth by one point and worsens the cyclical deficit by 0.5 point, leading ultimately to an improvement in the deficit of only 0.5 GDP point. Finally, when a liquidity trap (or rates of zero) is combined with generalized budget cuts, a one GDP point negative fiscal stimulus reduces growth by 2 points, because neither monetary policy nor exchange rates can offset the impact of the cuts. This widens the cyclical deficit by one point, and there is therefore no improvement in the public deficit despite the one point structural effort.

Furthermore, the economy’s position in the cycle influences the multipliers. At the bottom of the cycle, for instance, they are amplified: an austerity policy accentuates any deflationary tendencies at work, which intensifies the fall in demand and therefore the impact on activity. However, at the top of the cycle, the disinflationary effects of the austerity measures counteract the inflationary trend usually seen in this phase, thus reducing the multiplier. According to Creel, Heyer and Plane, after one year, and depending on the policy instruments used, the multiplier lies between 1 and 1.3 points when the economy is in the bottom of the cycle (assuming an output gap of -2%) and between 0.8 and 1.2 points in mid-cycle (an output gap of zero) and the top of the cycle (for an output gap of 2%). At 5 years, the effect is even stronger: between 1 and 1.6 points at the bottom of the cycle, between 0.6 and 1.3 in mid-cycle and between 0 and 1.2 at the top of the cycle. Thus, when the output gap is negative, fiscal consolidation policies are not very effective because they lead to a significant decline in GDP compared to a scenario with no restraint, which limits any fiscal gains to be expected from the austerity policies.

Today everything has come together for the austerity policies to lead to a significant slowdown in growth with little reduction in the deficit, especially in the euro zone. This is why we tried to assess the indirect impact, for France and the major developed countries, of the austerity measures being implemented by their trading partners, in addition to the direct impact of the various national plans. The impact of fiscal restraint (in country A) on demand from its partners (B) depends on the elasticity of imports with respect to the GDP of country A but also on the degree of openness and geographical orientation of exports of the B countries. In the case of France, for a national multiplier of 0.5, the total multiplier is 0.7, once the fiscal restraint policies of the partners are taken into account via foreign trade; for a national multiplier of 1, the total multiplier is 1.5.

Based on the fiscal packages planned in the various countries, we obtain an impact of foreign plans on national activity of between -0.1 and -0.7 point in 2012, depending on the degree of openness of the countries and the orientation of their trade (Table 2). For France, the restraint planned by its trading partners will cut growth by 0.7 point in 2012, which is almost equal to the savings plan set up by the government (1 point). In Germany, the impact of foreign austerity plans on GDP is close to that calculated for France: even if Germany is more open, it trades less than France does with the rest of the euro zone, and will benefit more from the US stimulus package in 2012. In the other euro zone countries, foreign fiscal cuts will have an impact of the same magnitude (0.6). In the US, the effects of the stimulus package will be undercut by the austerity measures being implemented elsewhere; while the direct effect of the stimulus package on GDP will be 0.7 point, the lower demand addressed to it will cut growth by 0.2 point, limiting the impact of the expansionary fiscal policy. The slower than expected growth could render the deficit reduction goals obsolete. Using our assumptions of national multipliers of between 0.6 and 0.9, a one GDP point negative fiscal stimulus in all the EU countries actually reduces the deficit by only 0.4 to 0.6 GDP point in each country, once the fiscal restraint of the trade partners is taken into account. 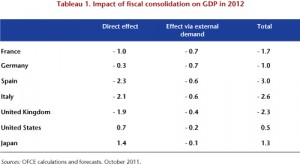 This text refers to the study of fiscal policy (in French) that accompanies the analysis of the economic situation and the forecast for 2011-2012, available on the OFCE web site.