Is there an inherent conflict between the technological efforts needed to meet the requirements of environmental policies and the liberalization of electricity markets? In effect, the way R&D spending by European electricity producers has changed over the last three decades can give rise to doubts about the ability of the European Union to meet its goal of reducing greenhouse gas emissions by 80% to 93% by 2050 (European Commission, COM/2010/0639).

This is shown by the graph below, where we have isolated the expenditure of the 15 main producers. The figure shows a surprising reversal of the trend concomitant with the wave of liberalization in the sector sought by the EU. As concurrence doesn’t necessarily mean causation, we took a look at whether the liberalization could be the source of this turnaround. 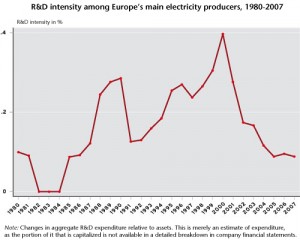 The R&D spending of Europe’s electricity producers has shrunk by 70% between 2000 and 2007, from 1.9 billion euros to 570 million euros (figures adjusted for inflation). The giants EDF and E.ON, which represent the two biggest R&D budgets in the sector, are largely responsible for this decline. R&D spending by the French electricity firm fell 33% from 2000 to 2007, from 568 million euros to 375 million. As readers are probably aware that R&D costs mainly go on personnel, it will come as no surprise that, in the case of EDF, the number of employees engaged in R&D (researchers plus technical support and administration) has fallen by about one-quarter since 2007, but we were not able to break this reduction down by type of activity.

How can producers meet the technical challenge posed by alternative energy while spending so little on R&D? Some people might believe that the situation is not as dramatic as implied by the graph above. Indeed, the R&D expenditures of the large electrical groups constitute only the bare minimum (around 10%) of the total, which is mainly spent by equipment manufacturers and public research laboratories. Looking at the figures for total private spending, it can be seen that there has been a relative increase since 2000 in the shares intended not only to increase energy efficiency, but also to produce electricity from renewable energy sources. This is the result of numerous support measures for innovation (measures to purchase “green” electricity, financing for public / private partnership projects, etc.), without omitting the research tax credit also enjoyed by EDF.

It is nevertheless best to hold off before celebrating the above-mentioned shift in environmental innovation from the producers to the manufacturers, as the competition might well wind up by undermining the ability of the former to acquire these innovations. The question of why R&D spending has been falling thus remains relevant. Were levels abnormally high in the past, when producers enjoyed the status of public monopolies? It is in any case possible to find objective reasons for the decline, beginning with the liberalization of the markets in the European Union which, as several studies have shown, was the event triggering this radical change in the innovation policy of the electricity producers [1].

The thesis put forward in these studies is that the expected increase in competition following the opening up of these markets makes the value of the producers’ future income more uncertain. The argument in support of this thesis is that some research projects directed towards public policy objectives (those reducing emissions) do not any yield short-term cost savings that would benefit the producers. The producers have thus refocused on their core business and abandoned research programs that are not procuring them any tangible benefits, particularly in terms of patents. In Europe, however, these sacrificed environmental innovation projects are now being developed by the manufacturers (for example, Vestas in the field of wind power). Research in nuclear power is being taken over by research providers such as Areva and Siemens. The producers are tending to replace these by programs with shorter research time frames that focus on energy demand management or improvements in energy efficiency. Note that the nature of innovation as a public good makes producers cautious, as they are supposed to bear the costs of the research projects but will not be the only ones to reap their benefits. This encourages some players to engage in “free riding”, and therefore leads to underinvestment in R&D at the aggregate level in the sector.

Interestingly, we find that this switchover gives rise to an acceleration of R&D spending in the period just prior to liberalization. First observed in the United States, this phenomenon can be seen clearly in Europe when looking at R&D levels. When the Directive containing the common rules for the internal electricity market was passed in 1996, the decline in spending that ensued was actually preceded by an increase that was even greater than that observed on average between 1980 and 1995.

However, the establishment of market rules does not explain everything. The restructuring / fragmentation taking place as the sector has opened up is not without consequences for innovation. In a way that is similar to what has been observed in other sectors like ICT, the major electricity groups began to take on debt – which necessarily came at the expense of spending on research and other investments – as they engaged in new acquisitions. Companies reorganized their research by outsourcing. The example in France is that of EDF Energies Nouvelles, since August 2011 a wholly-owned subsidiary of EDF. The industrial organization that exists today in the electrical power sector is an oligopoly with a competitive fringe. Although the activities of the main traditional producers are subject to separate accounting, they still form vertically integrated groups, from production to marketing.

This restructuring and fragmentation evokes a hypothesis that is well-known to economists concerning the advantage of large companies in terms of innovation: the Schumpeterian hypothesis [2]. Formally, the question is whether the intensity of R&D – that is to say, the ratio of R&D expenditure to a size variable (the balance sheet, for example) – is positively correlated with size. We were able to demonstrate this link in a sample of 15 major European electricity producers for the period 1980-2007 [3]. However, this result is largely contingent on the period under study, during which most producers were protected from new market entrants and competitive pressure on the territory where they were doing business as public enterprises, then called “natural monopolies”.

This position gave them at least three advantages that have now disappeared. First is a kind of “right of first refusal” on the use of innovations provided by equipment manufacturers, while they were also less fearful of being imitated on their own innovations. The potential for replication was limited to a very specific area of ​​activity for each country, usually the country, which made it possible to spread the costs of innovation over all domestic consumers. Moreover, as they were certain not to lose their customers, the traditional producers could take risks in launching basic research projects. Finally, the regulation of tariffs ensured a predictable level of revenue.

This suggests that the Schumpeterian impact of rent appropriation dominated the negative effect on the incentive to innovate due to the lack of actual or potential competition. Once the sector was opened to competition, some of the advantages listed above disappeared. The vast majority of customers remained loyal due to the significant cost of switching, but an increasing share of the electricity produced was sold on weakly regulated wholesale markets at volatile prices. The Schumpeterian hypothesis could therefore disappear, and competition would lead to stifling the innovation fostered by spending on R&D.

An oligopoly of producers with a competitive fringe

Europe’s electric power sector is characterized by a small number of large producers (oligopoly) that hold a large share of the market, while a large number of small firms (the competitive fringe) each have a small part of the residual market. Contrary to the received wisdom about competition, the fringe can have an impact on wholesale prices. In practice, since electricity cannot be stored, a producer asked by a carrier that is responsible for balancing production and consumption can offer the output of a power plant with low marginal costs at a price above the cost. An example is a producer at a marginal plant which, in times when demand is running up against production capacity (the peak), is requested to ensure the overall balance as a last resort.

[1] The study by Kammen, D.M. and R. M. Margolis (“Underinvestment: the energy technology and R&D policy challenge”, Science, Energy–Viewpoint, no. 285, 1999, pp. 690-692) had anticipated this situation for the United States. A study by P. Sanyal (“The effect of deregulation on environmental research by electric utilities”, Journal of Regulatory Economics, Vol. 31, no. 3, 2007, pp. 335-353) was the first to use econometrics to show how the liberalization of the electricity market was related to the fall in R&D spending.

[3] “A test of the Schumpeterian hypothesis in a panel of European electric utilities”, Document de Travail de l’OFCE, no. 2009-19, http://www.ofce.sciences-po.fr/pdf/dtravail/WP2009-19.pdf.