What new European austerity plans await us in 2012?

To meet French commitments vis-à-vis Brussels to a general government deficit in 2012 of 4.5% of GDP, the French Prime Minister Francois Fillon announced a new plan to cut the budget by 7 billion euros. Will the plan, announced 7 November, be sufficient? Certainly not! So what new austerity plans should we expect in the coming months, and what impact will they have on growth in 2012?

In early October 2011, among the points we indicated in our forecast dossier was that, of all the finance bills approved in Europe, no major country has met its commitment to reduce the deficit.

This will be the case in particular of Italy and the UK, which could face a gap of between 1.5 and 2 percentage points between the final public deficit and their commitment. In the case of France and Spain, the gap will probably be 0.6 and 0.7 point, respectively. Only Germany will come very close to its commitments (Table 2).

Unlike in previous years, the implementation of these commitments would seem probable: in an uncertain financial context, being the only State not to comply with its promise of fiscal consolidation would be punished immediately by more expensive financial terms on the repayment of its debt.

This will therefore require the adoption of new austerity plans in the coming months. But by attempting to reduce their deficits too early, too quickly and in a synchronized fashion, the governments of the European countries are running the risk of a new downturn. Indeed, as we noted in a recent study, tightening budget policy during a cyclical downturn in all the European countries and doing so in a situation of a persistent “liquidity trap” is contributing to the formation of a strong multiplier, close to unity.

How many billion euros will be targeted by the next fiscal savings plans? What impact will they have on economic growth? Several possible cases were considered.

Case 1: Each country respects its commitment alone
In order to isolate the impact on growth of the national savings plan and those of the partners, we have assumed that each country meets its commitment alone. Under this assumption, the effort would be significant in Italy and the UK, which would present new austerity plans for, respectively, 3.5 and 2.8 points of their GDP (56 and 48.7 billion euros). France and Spain would implement an austerity plan two to three times smaller, about 1.2 points of GDP, representing 27 and 12.1 billion euros, respectively. Finally, the German savings plan would be the weakest, with 0.3 point of GDP (7 billion euros) (Table 1). 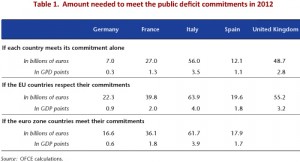 These different national austerity plans, taken in isolation, would have a non-negligible impact on the growth of the countries studied. With the exception of Germany, which would continue to have positive growth in 2012 (0.9%), this kind of strategy would plunge the other economies into a new recession in 2012, with a decline in their GDP ranging from -0.1% for Spain to -2.9% for Italy. France would experience a decline in activity of -0.5% and the British economy of -1.9% (Table 2). 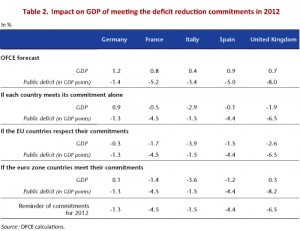 Case 2: All the EU countries meet their commitment

Case 3: Only the countries in the euro zone meet their commitment

As the UK has already implemented a substantial austerity program, and given that their constraints in terms of the deficit are more flexible than those of countries in the euro zone, we assumed that only the major countries in the euro zone complied with their commitments on the public deficit. Under these conditions, the cumulative savings effort would represent more than 130 billion euros in 2012, almost half of which would be from Italy alone (61.7 billion).

The recessionary shock would thus be focused on the euro zone, with a recession in all the countries studied except Germany (0.1%). The British economy would avoid a new period of recession (0.5%), but it would not meet the target of 6.5 percentage points of GDP for the public deficit, which would come to 8.2 GDP points.