The Great Recession, which began in 2008, has resulted in a continuous and inexorable rise in unemployment in France, by 3.1 percentage points between the low point reached in the first quarter of 2008 (7.1% in mainland France) and the peak in the fourth quarter of 2012. The unemployment rate is now close to the record levels reached in the late 1990s. This rise can be broken down into a change in the rate of cyclical unemployment due to the lack of economic growth, and a change in the rate of structural unemployment. The latter gives information on the extent of the output gap, which is crucial for measuring the structural deficit. Consequently, any choice about the fiscal policy to be adopted to re-balance the public finances needs an analysis of the nature of the additional unemployment generated by the crisis. In other words, has the crisis mainly resulted in cyclical unemployment or structural unemployment?

A study of the Non-Accelerating Inflation Rate of Unemployment (NAIRU)[1] offers one way of analysing whether the unemployment is structural or cyclical. Based on an estimate of the wage-price spiral, we propose in the OFCE’s  2013-2014 forecasts for the French economy taking a look at the level of the equilibrium rate of unemployment (ERU) using a recursive estimate of the NAIRU since 1995 in order to identify the share of cyclical unemployment.

First, our estimate of the ERU takes good account of the lack of real inflationary pressures since 1995. Indeed, the actual unemployment rate is consistently higher than the ERU over this period (Figure 1). However, between 1995 and 2012 underlying inflation varies between 0 and 2%. It reaches 2% in 2002 and 2008, times when the actual unemployment rate is closer to the ERU, although this does not reflect the real inflationary pressures. In 2012, the increase in the unemployment rate led to a wider gap with the equilibrium rate of unemployment and was accompanied by a slowdown in underlying inflation, which fell below 1% by the end of the year. 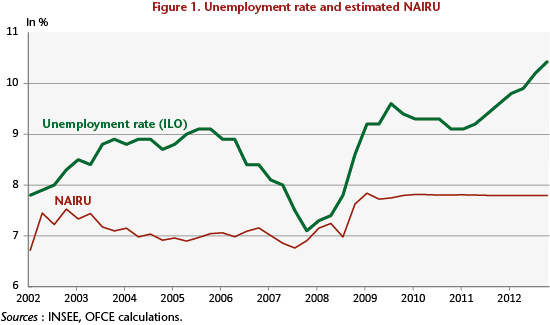 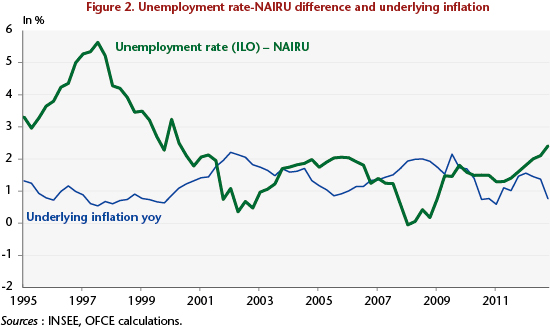 This text draws on the analysis of the economic situation and the forecast for 2013-2014, which is available [in French] on the OFCE site.