Holding to the required course

This text summarizes the OFCE’s 2013-2014 forecasts for the French economy.

In 2013, the French economy should see negative annual average growth, with a fall in GDP of 0.2%, before a modest recovery in 2014, with growth of 0.6 % (Table 1). This particularly mediocre performance is far from the path that an economy pulling out of a crisis should be taking. 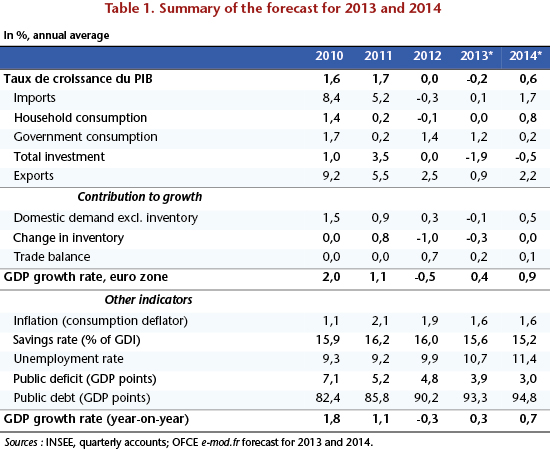 Four years after the start of the crisis, the French economy has a substantial potential for recovery: this should have led to average spontaneous growth of about 2.6% per year in 2013 and 2014, making up some of the output gap accumulated since the onset of the crisis. But this spontaneous recovery is being hampered mainly by the introduction of fiscal savings plans in France and across Europe. To meet its commitment to cut the public deficit to 3% by 2014, the French government will have to hold to the course of fiscal consolidation it adopted in 2010, which was imposed by the European Commission in all the euro zone countries. This budget strategy should slash 2.6 percentage points off GDP growth in France in 2013 and 2.0 percentage points off GDP in 2014 (Table 2). 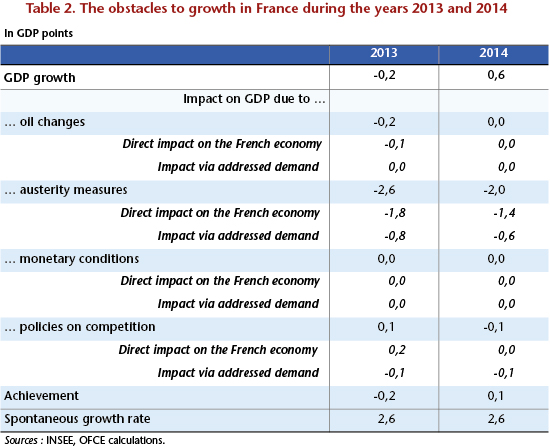 By setting a pace far from its potential, the expected growth will aggravate the output gap built up since 2008, with the labour market thus continuing to worsen. The unemployment rate will rise steadily to 11.6% in late 2014.

Only a shift in European fiscal strategy could halt the rise in unemployment. This would mean limiting the negative fiscal stimulus to 0.5 percent of GDP instead of the total of 1.0 points planned in the euro zone in 2014. This reduced fiscal effort could be repeated until the public deficit or debt reaches a defined goal. Compared to current plans, because the effort would be measured the burden of adjustment would be spread more fairly over the taxpayers in each country, avoiding the pitfall of drastic cuts in the public budgets. This new strategy would lead to a slower reduction in the public deficit (-3.4% in 2014 against -3.0% in our central scenario), but also and especially to higher economic growth (1.6% against 0.6%). This “less austerity” scenario would allow the French economy to create 119,000 jobs in 2014, i.e. 232,000 more than in our central forecast, and unemployment would fall instead of continuing to increase.