The Greek Sisyphus and its public debt: towards an end to the ordeal?

After its failure to elect a new President by a qualified majority vote, the Greek Parliament was dissolved, with early elections to be held on 25 January 2015. The radical left party Syriza is leading the opinion polls on the election, ahead of the “New Democracy” party of the outgoing Prime Minister, Anthony Samaras. While Syriza’s economic programme has met with enthusiasm from the population, it has aroused concern from the Troika of creditors (IMF, ECB and EU), particularly on three issues: the country’s potential withdrawal from the euro zone, the implementation of a fiscal stimulus, and a partial sovereign default. This last topic will be the main issue after the elections.

Fears about Greece’s potential exit from the euro zone (the infamous “Grexit”) need to be nuanced. The situation is different from what it was at the time of the sovereign debt crisis, when bond rate differentials were fuelling worry about contagion and the breakup of the euro zone. Furthermore, Syriza is not in favour of leaving the euro, and no-one can force the country’s hand, given that there is no provision for this in any text. Finally, the consequences of such a decision on the other members could be severe, so that a Greek withdrawal from the euro zone would come only as a last resort.

Syriza is calling for an end to austerity and for a fiscal stimulus of 11 billion euros along with restoring the minimum wage to its previous level, better pensions, rehiring civil servants and increased public spending. Can a compromise be reached with the Troika? Nothing is less sure, and it is virtually certain that Syriza will have to revise its ambitions downwards. The Greek deficit has of course shrunk. The country ran a small primary surplus in 2014 and is expected to continue its fiscal consolidation policy in 2015-2016. But Greece must continue to borrow to finance the interest on the debt, to repay or renew the debt reaching maturity and to repay the loans from the IMF. To do this, Greece must rely largely on external aid. From the second half of 2015, the country will face a financing gap of 12.5 billion euros (19.6 billion euros if it does not get IMF assistance). Moreover, Greece’s still fragile banks[1] are very dependent on access to the ECB’s Emergency Liquidity Assistance Program (ELA), which allows them to obtain emergency liquidity from the Bank of Greece. If Greece rejects the reforms, a showdown with the Troika is likely. The ECB has already threatened to cut off the country’s access to liquidity. In addition, the Troika is the main creditor of Greece, which however has a new bargaining point: to the extent that Greece borrows only what it needs to repay its debt, and not to fund its budget deficit, it could threaten its creditors with a unilateral default on payments, even if this is a dangerous game that could deprive it of access to market financing for many years to come.

It is precisely this issue of restructuring Greece’s debt and a partial default that is being emphasized by Syriza and which will likely be one of the main post-election issues. Alexis Tsipras wants to cancel a portion of the public debt, to put a moratorium on interest payments, and to condition repayments on the country’s economic performance. According to forecasts by the EU Commission and the IMF, Greece’s public debt ratio is expected to fall from 175% of GDP in 2013 to 128% in 2020. However, the assumptions underlying this scenario are not realistic, i.e. nominal growth of more than 3% in 2015, a primary surplus of 4.5% of GDP between 2016 and 2019, etc. Given the size of Greece’s public debt in 2013 and its amortization profile (with reimbursements amounting to 13 billion euros in 2019 and up to 18 billion euros in 2039[2]), a new restructuring seems inevitable.

A public debt that is essentially held by euro zone countries

Since the onset of the Greek crisis in autumn 2009, the composition of the country’s public debt has changed substantially. While in 2010, the debt was held by financial investors, the picture in early 2015 is very different [3]. After two assistance plans (in 2010 and 2012) and a restructuring of the public debt held by the private sector in March 2012 (Private Sector Involvement Plan), 75% of the public debt now consists of loans (Table 1). Together the IMF, the ECB, the national central banks and the countries of the Eurozone hold 80% of Greece’s public debt. 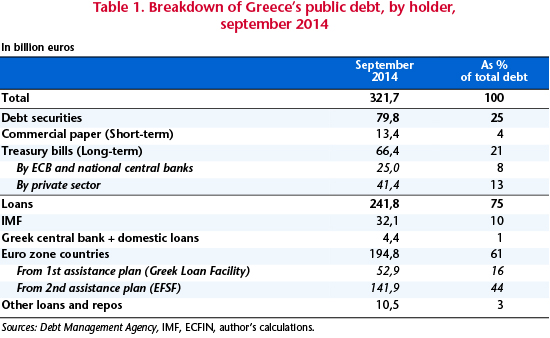 Conversely, since the March 2012 restructuring plan, Europe’s banks have sharply reduced their exposure to Greece’s public debt (Table 2). Moreover, their capital levels have risen since 2010, especially with the gradual implementation of the Basel 3 reform. The banks thus have a safety margin in the case of a partial default by Greece.

Since more than half of Greece’s public debt is held by members of the euro zone, no renegotiations can take place without their involvement.

So what are the possibilities for restructuring the debt?

The European countries have already made several concessions to help Greece service its debt:

– The maturity of the loans has been increased and the interest rate on loans granted by the EFSF has been reduced. For the first assistance program (bilateral loans), the initial maturity was 2026 (with a grace period until 2019) and the interest rate was indexed to the 3-month Euribor plus a risk premium of 300 basis points. In 2012, this risk premium was cut to 50 basis points and the maturity was extended by 15 years to 2041;

– Any profits made by the ECB and the national central banks on the bonds they hold were returned to Greece;

– Interest payments on the EFSF loans were deferred by 10 years.

Solutions like some used in the past could be implemented. The debt could be rescheduled. Indeed, the rate charged on the loans in the first assistance package (3-month Euribor + 50 basis points) is generally higher than the financing costs of the European countries, and could be lowered. And the term of the loans in the first and second assistance packages could be extended by another 10 years, until 2051. According to the Bruegel think-tank, these two measures combined would reduce Greece’s total repayments by 31.7 billion euros.

These measures nevertheless seem limited for resolving the issue of Greek debt: they only postpone the problem. Other measures are needed to relieve Greece of its public debt burden. As the euro zone countries are the main ones exposed to Greece’s debt, they have an interest in finding a compromise: if there is a unilateral default, it is taxpayers throughout Europe who will wind up paying.

As for the IMF, there’s no point waiting for debt forgiveness. The institution is indeed the senior creditor in case of a country’s default, and lender of last resort. Since its founding, it has never cancelled a debt. It is therefore with the members of the euro zone, Greece’s main creditors, that a partial default needs to be negotiated. On the one hand, Greece can threaten an uncoordinated unilateral default, causing losses for its creditors. But on the other, it has no interest in alienating euro zone members and the ECB, which have been its main supporters during the crisis. A sudden default would deprive it of access to market financing for many years; even if Greece has achieved a primary surplus, the situation is unstable and it still needs external financing, even if only to honour its repayments to the IMF. One solution would be for the euro zone countries to accept a discount on the face value of the government debt they hold, as was done with private investors in March 2012.

In conclusion, Greece is facing a series of challenges. In the short term, the priority is to find sources of financing to get through 2015. To do this, the country will have to deal with the Troika, in particular the ECB, whose action will be crucial. The Bank has warned Greece that if negotiations fail, it could cut off the country’s access to liquidity. Furthermore, on 22 January 2015, the ECB must reach its long-awaited decision on quantitative easing; the issue is whether the ECB will accept the redemption of Greek government bonds. In the longer term, the issue of restructuring the debt will inevitably arise, regardless of who wins the polls. However, the restructuring is likely to be easier with public creditors than with the private banks, if, that is, Greece has in turn won the trust of its European partners.