Working in the United States: longer, harder, and …. on weekends!

By Elena Stancanelli, Paris School of Economics, CNRS and Research Associate at the OFCE[1]

Americans now work longer hours than Europeans. Daniel Hamermesh and Elena Stancanelli show in “Long Workweeks and Strange Hours” that the lengthening of the workweek in the United States has gone hand in hand with more work at night and on weekends.

The authors’ results are based on mining a unique set of data, the American Time Use Survey and a panel of European individuals that accurately measures employee working time (weekly, week-ends, at night) as well as a range of other activities (leisure, child care, domestic work, rest periods, etc.) using daily time diaries [2]. The individuals are interviewed about the entire day (24 hours) using ten-minute slots (144 ten-minute slots are filled in for each individual). These data are collected by the national statistical institutes for representative samples of the population, on an annual basis in the United States but much less frequently in Europe. For example, in France, the Emploi du temps(EDT) survey is collected by the INSEE statistics institute once every twelve years.[3]

In the US, over 30% of employees work more than 45 hours per week, a much higher rate than in France, Germany or the Netherlands (Table 1). The number of hours worked per person has fallen significantly in the last two decades in almost all OECD countries. The only exception is the United States, where hours worked fell by only 2% from 1979 to 2012, compared with, for example, an 18% reduction in France (Table 2). It is therefore not very surprising that one in three American workers are working weekends, versus fewer than one in five in France, Germany and the Netherlands (Table 1). Night work, defined as working between 10pm and 6am, is even less widespread in France, as it affects only 7% of workers, compared with over 25% in the United States and 10-15% in Germany and the Netherlands (Table 1). Furthermore, weekend work is usually performed by less-qualified individuals, immigrants and women, that is to say, by those with little bargaining power (Kostiuk, 1990; Shapiro, 1995). This tends to confirm the arduous nature of weekend work and its compulsory character. In contrast, people who work nights have more varied characteristics. Even so, more educated workers are less likely to work at night, which, again, would suggest its onerous character.

Finally, a simulation shows that, even if we assume that the United States were identical to the European countries in terms of both demographic characteristics and the structure of employment (occupational sectors, type of employment, hours worked) [4], this still fails to explain why Americans work so much and on weekends and at night (Hamermesh and Stancanelli, 2014). What is the reason for this? The importance of cultural differences between the US and Europe? The existence of institutional differences? A complex interaction between culture and institutions? This is a wide-ranging debate that has barely begun.

In any case, one key result of this study is to highlight the socially undesirable character of work on weekends, due to the damage this can cause to  family relations (Jenkins and Osberg, 2005) and to social life (Boulin and Lesnard, 2014). Food for thought for our MPs during the vote on the economic reforms in the Macron bill? 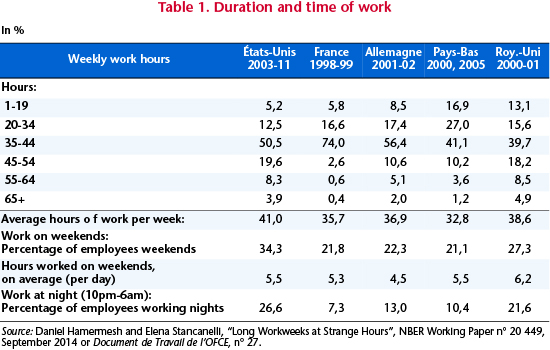 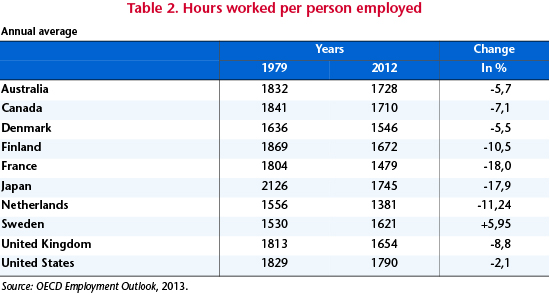 Jenkins, Stephen and Lars Osberg, 2005, “Nobody to Play With? The Implications of Leisure Coordination”, In Daniel Hamermesh and Gerard Pfann (Eds.), The Economics of Time Use, pp. 113-45. Amsterdam: Elsevier.

Shapiro, Matthew, 1995, Capital Utilization and the Premium for Work at Night. Unpublished paper, University of Michigan.

[1] The author would like to thank Sandrine Levasseur, editor of the OFCE Blog, for her helpful comments and valuable suggestions.

[2] The authors use the harmonized version of the data made available by a group of researchers from Oxford University (see Gershuny and Fisher, 2014).

[3] These data are based on the average of the 2010 years for the United States and for different years in the early 2000s for the European countries. For France, we decided to use the 1998-1999 EDT data, as the most recent survey, for 2009-10, took place in the midst of the economic crisis, which could have affected the pace of work. In addition, teachers were visibly oversampled there, which would tend to distort international comparisons, as weightings do not perfectly correct the distortions. It seems very unlikely that the difference between the US and the European countries has narrowed in recent years.

[4] For the United States, the regressions also include fixed effects for the various States, in order to capture institutional differences from one State to another.