How should Ukrainian refugees be welcomed? 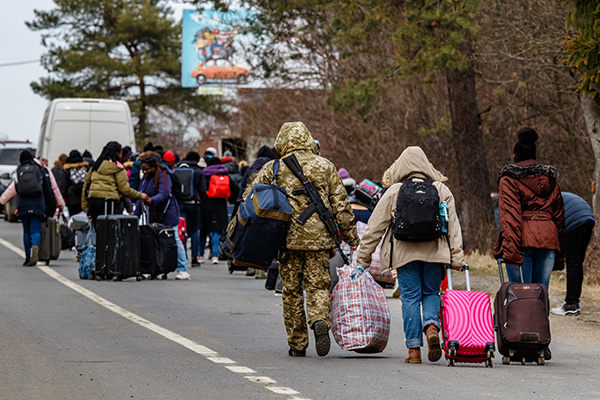 Since the war in Ukraine started, unprecedented numbers of refugees have poured across the country’s borders. As of 15 March, the UN High Commissioner for Refugees counted more than three million refugees who have crossed the border since the Russian offensive began on 24 February. In just three weeks, the number of refugees has surpassed the year-long peaks reached during the 2015 and 2016 migration crisis. The number already exceeds the total number of refugees that followed the Bosnia and Herzegovina war in the years 1993-1995.

In order to avoid having asylum applications filed in more than one European country, the Dublin III Regulation (2013) requires refugees to apply for asylum only in the first country through which they entered the EU. This regulation aims to encourage border states to better monitor their borders but also both to clarify which country is responsible for examining the asylum application and to prevent attempts at “asylum shopping”.  During the 2015 migration crisis, this system disproportionately placed the burden of receiving refugees on countries with a Mediterranean border that were directly on the route of Syrian and Afghan refugees. Countries such as Greece and Malta were soon overwhelmed by asylum applications, which far exceeded their processing capacities.

Faced with the massive and rapid flow of Ukrainian refugees, the European Union, aware of the inadequacy of the Dublin Regulation, took unprecedented steps. The Temporary Protection Directive, drawn up in 2001, was activated for the first time on 4 March 2022, following its unanimous adoption by the EU Council of Interior Ministers on a proposal from the EU Commission.

Temporary protection simplifies the reception of Ukrainian refugees by preventing the clogging of asylum systems. In some countries, processing asylum applications can take several years before a final decision is reached. Even if a fast-track procedure had been introduced, it would have been difficult to avoid overloading the asylum system and lengthening the processing time for the large number of Ukrainian refugees. Such long delays penalise the refugees. Uncertainty about the possibility of staying in the host country reduces in particular the incentive to establish links with the country and to learn the language (Hainmueller et al., 2016).

Another advantage of temporary protection is that it allows Ukrainian refugees immediate access to the EU labour market. Only four countries in the EU have previously allowed asylum seekers immediate access to the labour market. All the rest restrict access to employment for periods of between two and 12 months, and sometimes indefinitely. Recent studies have shown that work bans are particularly costly, not only because people do not contribute immediately to the economy, but also because the bans have a persistent negative effect on asylum seekers’ subsequent employment after they have finally been granted refugee status (Fasani et al., 2021).

The challenge of economic integration

The scale of future arrivals and the length of stay of refugees will depend both on what happens with the conflict and on Ukraine’s post-conflict economic prospects. While not all refugees will want to stay in the EU, the large-scale destruction already witnessed suggests that the country’s post-conflict economic difficulties may prompt many refugees to prolong their stay or even to settle down. The return of refugees could also be jeopardised by the lack of security in certain areas or in the country as a whole. It is therefore likely that a proportion of refugees will stay in the EU for a long time, if not permanently, as happened with Yugoslav refugees long after the conflict ended (Bahar et al., 2022).

The economic integration of refugees poses specific challenges (Verdugo, 2019). Most studies suggest that, at least initially, refugees encounter more difficulties than economic immigrants in finding employment and integrating into the host country’s labour market (Dustmann et al., 2017). This is because economic migrants prepare for migration, so those who migrate are positively selected, i.e. it is those who are best prepared and most capable of succeeding within their home population who try their luck abroad. Economic migrants are also more likely than refugees to master the language of the host country and to benefit from solidarity networks that help them to integrate economically (Borjas, 1987). In contrast, the migration of refugees is not economically motivated. They are forced to migrate in order to escape physical insecurity, and they do so in an emergency. Refugees are more often workers whose knowledge is less valuable in their host country (Chiswick, Lee and Miller, 2005).

On the other hand, refugees, unlike economic migrants, face uncertainty about the possibility of returning to their country of origin. Their migration is more likely to take place over a longer time horizon than that of economic migrants, which may encourage them to build long-term relationships with the host country. Cortes (2004) finds that, in the United States, while refugees initially face greater economic hardships, they tend to catch up with economic migrants in the longer term.

How to allocate refugees

The burden of hosting refugees has always been unevenly distributed (Huertas Moraga and Hagen, 2021). The Ukrainian crisis is no exception. Most Ukrainian refugees are currently in the countries bordering Ukraine and, as of 15 March, over 60% were in Poland. As in the 2015 migration crisis, EU countries face the challenge of spreading their reception over a number of countries so that the cost doesn’t fall on a small number of countries and exhaust their good will.

Despite the adoption in 2015 of a European Agenda for Migration, which highlights the benefits of cooperation, progress in this respect has been limited. The Pact on Migration and Asylum proposed by the European Commission in September 2020 has yet to be discussed by the EU Parliament and Council. In this draft, the European Commission proposes to introduce mandatory quotas based on GDP and population size, with some flexibility. A new proposal is that each country can choose either to take in refugees or to contribute to the cost of returning migrants whose asylum applications have been rejected.

Other innovative proposals are also circulating. In an influential article, Fernández-Huertas Moraga and Rapoport (2014) propose the introduction of quotas that are then tradable on a quota market between EU countries. So if a country wants to reduce its quota and take in fewer asylum seekers, it can pay another country to receive more. Fernández-Huertas Moraga and Rapoport (2014) also propose the introduction of a system that could match asylum seekers’ preferences with each state’s preferences. Asylum seekers would thus declare which countries they prefer, and the countries would identify their preferences for different categories of asylum seekers. A centralised allocation algorithm would allocate asylum seekers based on the two groups’ respective preferences. While governments have always been reluctant to offer asylum seekers greater choice, the EU Commission is nevertheless proposing to take into account their preferences and try to receive them in countries where they have “meaningful links”.

Whatever system is put in place to distribute the Ukrainian refugees, they are currently free under temporary protection to move between European countries and thus to choose their preferred destination. If reception quotas are introduced, it is not clear how effective they will be unless refugees’ mobility is restricted. However, it seems difficult to move refugees in an authoritarian manner to countries that they have not chosen and where they have no ties and may have difficulty integrating. In the short term, the most credible solution seems to be to combine compensation for the countries that receive the most refugees with incentives to settle in countries that do not receive so many.