Paul Krugman raises the very important issue of the impact of monetary policy on financial stability. He starts with the well-known observation that, contrary to the predictions of some, expansionary monetary policy did not lead to inflation during the current crisis. He then continues arguing that tighter monetary policy would not necessarily guarantee financial stability either. If the Fed were to revert to a more standard Taylor rule, financial stability would not follow. As Krugman aptly argues, “That rule was devised to produce stable inflation; it would be a miracle, a benefaction from the gods, if that rule just happened to also be exactly what we need to avoid bubbles.“

Krugman in fact takes position against the “conventional wisdom”, which has been widespread in academic and policy circles alike, that a link exists between financial and price stability; therefore the central bank can always keep in check financial instability by setting an appropriate inflation target.

The global financial crisis is a clear example of the fallacy of this conventional wisdom, as financial instability built up in a period of great moderation. A recent analysis by Christophe Blot, Jérôme Creel, Paul Hubert, Fabien Labondance and Francesco Saraceno shows that the crisis is no exception, as over the past few decades, in the US and the Eurozone, the link between price and financial stability has been unclear and moreover unstable over time, as shown on the following figure. 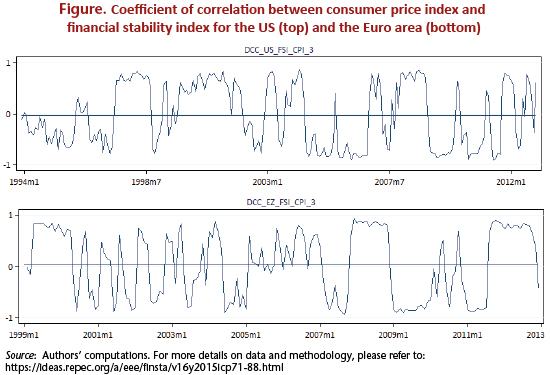 We therefore subscribe to Krugman’s view that financial stability should be targeted by combining macro- and micro-prudential policies, and that inflation targeting is largely insufficient. In another work, Christophe Blot, Jérôme Creel, Paul Hubert and Fabien Labondance argue that the ECB should be endowed with a triple mandate for financial and macroeconomic stability, along with price stability. They further argue that the ECB should be given the instruments to effectively pursue these three, sometimes conflicting objectives.