Short-term contracts: Not all taxes are the same

By Bruno Coquet, OFCE and IZA

Short-term contracts are useful for the proper functioning of an economy, but in France their expansion, together with shortening contract periods (Figure 1), is costing economic agents as a whole dearly, while the minority of companies that make extensive use of these is bearing only a marginal fraction of the costs. 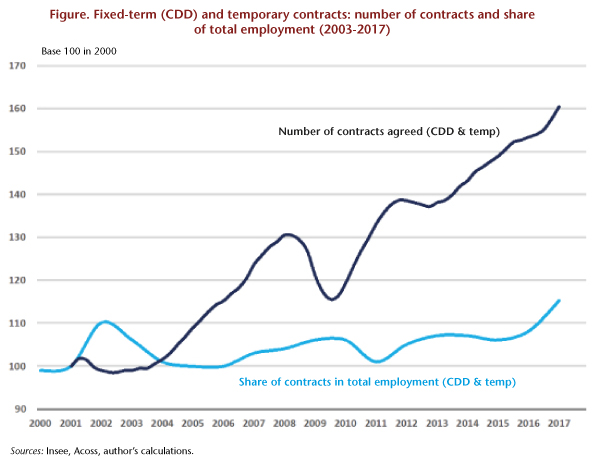 Experience has shown that the use of short-term contracts in France has not been held back by what are generally considered to be strict labour regulations. It seems reasonable to think that if employers make massive use of short-term contracts, it is probably not because they are forced to do so, but because they have an interest in doing so. It then becomes clear that what needs to be influenced is the economic equations of the user companies, and not simply the law. Economic theory is inclined to modulate the prices of different employment contracts in accordance with the externalities they generate.

Different levers exist to price employment contracts, but they are not all equal: the goal must be clear, as must the instrument appropriate to achieve the goal. Nor are all levers adapted to the French context, which calls for rules that are transparent, easy to administer, applicable to all employment contracts and all sectors (without exception, including the public), and encourage employers to make use of less costly choices. The pricing must be contemporaneous with expensive behaviour, but neither punitive nor symbolic, not increasing the cost of labour, and not aiming to bail out the Unedic agency.

In a working document of the OFCE [in French], we describe these different instruments for modulating the prices of employment contracts, their advantages and disadvantages, in absolute terms and in the context of France. A tax that is modulated by sector, and even more so a tax modulated by company, both appear to be ill-suited to solving the problem of short-term contracts as it is currently posed in France. They could even be counterproductive.

A contribution that is digressive according to the duration of the employment contract, together with a flat rate and a deductible, appears to be the mechanism best suited to ensure the survival of unemployment insurance in a labour market marked by the increasing use of ever shorter work contracts. It would be desirable to combine this digressive contribution with a flat-rate system designed to reduce incentives to create extremely short contracts, and with a deductible designed not to increase the labour costs of small businesses, particularly those that are growing strongly.

Our simulations illustrate that finely negotiated parameters can lead to a balance that satisfies all the stakeholders.