A State that asks a third of its civil servants to stay home because it can’t pay them is in a critical situation. When it’s the United States, it’s the whole world that worries.

The absence of an agreement on the 2014 budget, which was to take lawful effect as of Tuesday, 1 October 2013, shows the standoff in Congress between Democrats and Republicans. This kind of contention over the budget is not new: no budget has been passed since 2011, and the federal government has worked up to now through “continuing resolutions” that are used to release the funds needed for the government to function and operate, on a provisional basis. Today’s blockage is on a different scale, and parts of the administration have had to close their doors due to lack of funds. This exceptional situation is not unprecedented: 17 shutdowns have occurred since 1976, the last two under the Clinton administration, lasting, respectively, one week (from 13 to 18 November 1995) and three weeks (from 15 December 1995 to 6 January 1996).

According to the Office of Management and Budget, of a total of 2.1 million federal government employees, more than 800,000 have been prohibited from working, while others have come to work with no guarantee that they will be paid. For example, those being told not to work include 97% of NASA employees, 93% of the Environmental Protection Agency, 87% of the Department of Commerce, 90% of the IRS, etc. Each of these received a letter from the President expressing his bitterness. In practice, this also means that some social services are no longer assured, some government call centres are closed, and the national monuments and 368 national parks are no longer open to the public. Applications for subsidized loans, housing grants, and loan guarantees are no longer being taken, and some government services are closed: 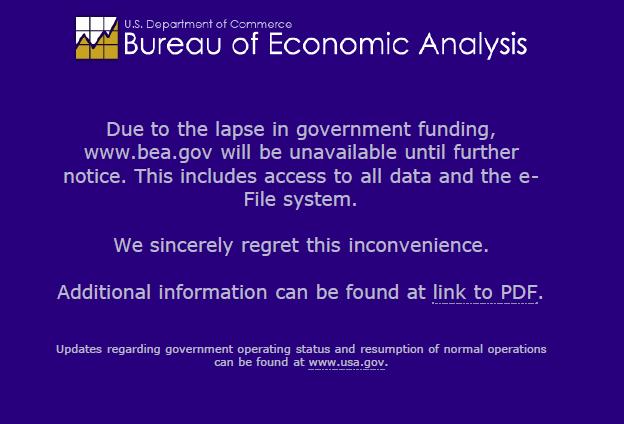 Vital services and programs for which funding is not linked to the vote on the annual budget (so-called mandatory spending), which account for over 60% of pre-interest expenditure and represent 12.7% of GDP, have nevertheless been spared. Some social security programs (Medicare, Medicaid), the postal service, national security, and military operations have thus been protected from shutdown, at least in so far as they are not affected by restrictions on staff whose salaries are covered in the 2014 budget.

Another political and fiscal crisis is looming: the US government could go into default from October 17 if the authorized debt ceiling is not raised. The uncertainty surrounding this situation is fraying nerves on the financial markets, and the frozen political climate in Congress does not seem to herald an honourable end to what the media are calling a “game of chicken” [1]. In 1995, however, Clinton emerged victorious from this crisis with the Republicans, and was re-elected in 1996, despite the Republican majority in Congress.

The economy could be seriously affected while awaiting an end to this crisis. If the salaries and benefits of federal civil servants are not paid, the loss in earnings would come to an average of 1500 dollars per week for each family affected. Given the total of 2.1 million federal employees, this would represent 0.08% of quarterly GDP. In three weeks, this would amount to a loss of 0.25% of GDP for the economy in the 4th quarter. Congress could, however, approve retroactive payment of the salaries, which is what generally took place during previous shutdowns.

But this still does not take account of the more important issue of the disorganization of the economy. Considering that on an annual basis half of the federal government’s discretionary spending (i.e. 37% of federal spending, or 7.6% of GDP) [2] is affected by the shutdown, since it is financed out of the 2014 budget, this loss in expenditure represents 0.15 GDP point per week. Given the disorganization represented by the government closures (and using a fiscal multiplier of 1.5), the impact on growth could then come to at least 0.22 GDP point per week. If the crisis lasts 3 weeks, then the impact on 4th quarter GDP would be at least 0.7 GDP point – which would mean a recession for the US economy by the end of the year!

Other estimates do exist. The Office of Management and Budget evaluated the cost of the 1995 shutdowns (from 13 to 18 November 1995 and then from 15 December to 6 January 1996) at 1.4 billion in 1995 dollars (i.e. 0.5 % of quarterly GDP). Based on the 1995 shutdowns, Goldman Sachs evaluates the current weekly cost to the US economy at 8 billion dollars, equivalent to an impact of 0.2% of 4th quarter GDP. Moody’s Analytic Inc. estimates that the shutdown will have an impact of 0.35% of quarterly GDP per week.

If the budget crisis lasts only a few days, its repercussions on the French economy will be minimal, i.e. a reduction in US growth of 1 percentage point would cut French growth by 0.17%. But if the crisis lasts several weeks and overlaps with a crisis over the ceiling on the government debt, which is quickly approaching, then the consequences could be very different. The two crises the (blocked budget and the failure to pay the public debt) would combine and fuel one another, as is emphasized by this New York Times post. It is difficult to imagine the panic this could cause on the financial markets, as interest rates soar and the dollar collapses. This would be a very different story indeed….

[1] In game theory, a game of chicken is a game of influence between two players in which neither must yield. When for example two cars are racing towards a head-on collision, the “chicken” is the driver who veers off course in order to avoid dying.

[2] A major part of spending by the Department of Defence is approved on a multiyear basis and is not subject to being blocked due to the shutdown. Over half of DoD spending is composed of this discretionary expenditure. Furthermore, mandatory outlays are not financed out of credits subject to the vote on the Budget.